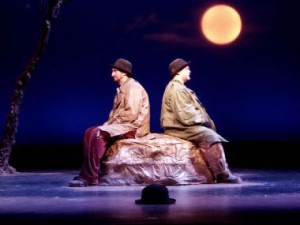 A normal 98% human lives their life like the vagrants in the famous Samuel Beckett’s nihilist play: Samuel Beckett: Waiting For Godot.

If you have never seen it: it’s an empty stage signifying an abandoned filthy littered lot in the middle of nowhere.

Our vagrants talk about nothing for the entire length of the play, while waiting for a guy named Godot.

In the end we find out that Godot never goes that way. So why are they waiting for him there? Because they can wait there… everywhere else they would not be welcome.

Beckett and his anti-heroes are exactly describing the current state of humanity: do what you can where you can, talk about nothing, and wait for something. Never cause anything.

On the surface this is not a bad life, but if you look how it looks and how it feels, it is the underlying cause of depression, melancholy, lifelessness. Walking dead… zombie…

Now, you may be arguing that you are going to work, that you have relationships, go to parties, get drunk, work out, or whatever you fill up the time so you don’t die of boredom, but if you scratch the surface of your pretty life, it is Waiting for Godot, not much more.

Last night I watched a movie. I knew I was going to like it before I watched it. Any movie that is about musicians, I always love. Why? I don’t know. Maybe because to be a musician you need to hear the music of the beyond, you need to be connected, and for me that is wonderful. 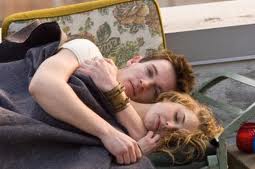 This movie, August Rush, started out bad. This young kid, about ten or eleven, says something really profound, something like “the music is always there, you just have to hear it…” the kind of profound stuff that makes me wean to puke.

The movie is about a kid who is born out of a one-night stand between two musicians. The father of the girl forges her name on the adoption papers and tells her the kid died during the birth.

He insists on living like that, unrealistically holding the space for this to happen, in spite of the fact that the other boys try to beat it out of him.

But nothing happens until he does something, and that is how it always is. Holding the space… blah blah blah never has done anything for anyone.

What he does is simple: one evening he starts to walk and doesn’t stop until he gets to New York City. There he goes through trials and tribulations that all lead him to develop and express his musical genius.

The story culminates in a concert: his rhapsody gets performed by the New York Philharmonic Orchestra, at a charity even where his mother is a performer, and the father and the mother are drawn to his energy, his music, and there you have it, happy ending.

So you see, the story is a little lame, but the lesson is strong.

What is it that is worth learning from this:

1. What the law of attraction teaches is bs. There is a lot more to it than that. The Law of Attraction leaves you still passive… no matter what they say.

2. Nothing happens until you get outside of your usual routine actions.

3. Hearing the music won’t get you to use music to draw others to you: replace music with anything, and you see the principle here. You need to start learning to perform the music, then perform the music, perfect it, and get it in front of many people.

4. Never settle for less. Never allow others to seduce you with anything less than what you originally set out for yourself. Had this kid settled for money (could have, easily) he would have never got his parents back.

5. Be willing to be the instigator. The actions that this kid took were gutsy and quite off the wall. This caused a quickening. For whom? For the people he wanted to attract. Mom wasn’t going to perform with the NY Philharmonics. Dad has settled into a relationship and a job. But our kid making those gutsy actions woke his parents up and they were drawn to New York. To find him and to find each other.

It doesn’t matter what you want, if you are not willing to be the instigator, you are passive, you are waiting for Godot, and that’s that.

I had a similar experience just recently.

I had a sudden desire to retire my other business that is paying the bills for me. I saw that what was missing is making money with this “business” of connecting people to the Original Design.

I was already fully busy, so I thought for a solution outside of myself. I thought of hiring a marketer to make money for me.

I found an offer that was good. Had a 30-minute call with the guy. We agreed, I paid him… and then I did something extraordinary:

Normal, or ordinary behavior would be to sit back and wait for the new guy to do what he does. Then pester him that he is not fast enough, or something like that. Right?

Instead I did the unpredictable: I started to work, in earnest at actually increasing the revenue my “business” can make. And although the “guy” hasn’t done a lick of work (and probably won’t do anything good anyway, lol, I have already made back the money I paid this “guy” now three times over, and there is no telling what the bottom line will be.

Why? Because I used spending that money as a quickening agent, instead of what most people spend money on, a calming, soothing, sleep-inducing agent.

Now, what there was to learn from this article is that your biggest enemy is the self-induced sleepwalking, passivity, but the solution is in your hands. No one is forcing you to be passive. You are doing it to yourself.

But it’s killing you. It’s time to come alive and start causing a quickening for yourself. Set a goal that is unlikely but possible. And start working towards it.

At some point, if you work intensely enough, it will cause a quickening. Guaranteed.