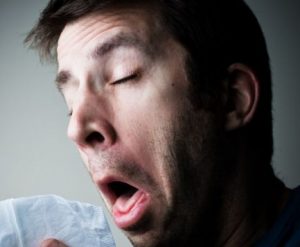 Coughing and sneezing are designed by the body as a strategy to eject an intruder. Mucus membranes overflow and cover the offending object, the intruder, and then a lot of air is to push it out.

The question is: what is the offending object?

Instead of just labeling this phenomenon as “I have allergies” consider that a little observation, a little awareness, a little witnessing can make a huge difference.


You may have to work on developing your feeling capacities, but in the end it will be worth it… unless you like to live your life in blissful ignorance.

Most early morning coughing and sneezing is caused by a microscopic insect, a tiny biting mite. It lives and breeds on your body, hides under your eye lashes, breeds on your hair and in your ears, and gets into your nose.

For a tiny insect, a few microns in size, skin color, invisible on your skin, your nose is like a huge cave where he can hide from the huge wind of a human getting out of bed.

Once it gets in more than an itch, the insufferable itch begins in one nose or both, and the sneezing, begins.

If the mite continues down the air canal, you’ll also cough, desperately trying to get rid of the invader.

Here are a little statistics:

30% of humanity has a mite infestation, only 1% knows it. So they treat their sneezes, “their allergy” with medication… why disturb the little suckers, right?

Doctors won’t tell you: I have found, so far, very few methods that harm these little buggers, and a lot of what I have read on the internet are actually counter productive… the mites go into a furious population growth mode as a result.

The bug is so small that it is near impossible to observe it with instruments, so enter the Empath.

I have trained my senses to feel better than most any instrument. After about two months, no I can even see them when they are separated from their background.

And I have run many experiments, muscle tested for ideas, meditated for a solution.

The work is not done, but the methods I have tested lead to a few possible directions of decimating this pest…

Can they be eliminated? I doubt it. I have randomly muscle tested people I meet and met in the past. Nearly all of them have mites on their bodies and in their houses.

So re-infestation is not just possible, it is predictable.

But it is possible to keep them in check. Just like with any other insects… without killing yourself in the process.

I am now working on the idea of a trap that can, maybe be manufactured and mass produced.

30% of the population is 2.1 billion people… and the number is growing.
I am also writing a report, that I’ll be selling, on my experiments… what worked, what didn’t work, what made a population explosion, and such.

1 thought on “Coughing and sneezing in the morning?”