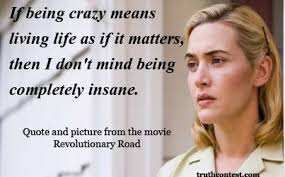 Let me first define what I mean by “making a difference…” because there is a lot of mischief about that in common language. Because it’s been a slogan. Because it has been a bromide for so long.

OK, explanation: if I am hired to design a system that reduces the carbon dioxide load… to turn around the Global Warming… I am asked to “make a difference”, i.e. to alter the future.


This is not open for argument. You either did something or you didn’t do it.
Life is not as wishy washy as the consolation culture we live in.

I won’t bring more examples, because this one should suffice: you either did fully, irreversibly what you were asked to do or you didn’t.

That is the job of sages, and NONE have done it at all, so they didn’t make a difference.

When I read your comments, your emails to me, I see that the same fate is mine… I don’t make a difference.

And another question that seems to be intelligent is this: knowing what people should be like, what they should feel, see, think: is that sufficient to change even one person?

Truth seers abound. Self-acclaimed prophets abound. But has any of them been equipped to make a difference?

I just spent reading “Michael Smith” The Present, or The Truth “work” that people hail as having the potential to make a difference for humanity.

9% truth value… but… but even if it were 100% truth value, could it make a difference with YOU? I mean you, the person who is reading these words…

My observation has been that the answer is NO.

Humans, even the best of them, are mostly unaware. The world comes at them as undifferentiated mass… no distinctions, no ability to see, because for distinctions something needs to be activated first…

Did you notice that cats can’t see much? They can see movement, but if something doesn’t move, they can’t see it.

There eyes are able to see it, but their brain won’t.

Your eyes may see, but your brain isn’t processing it: because there are no distinctions.

The truth is, I think, is that when all of humanity will suffer unbearably, then, maybe then, the next stage of evolution will be of interest to people.

People talk about critical mass… Critical mass is a certain percentage of people that when they start doing something, the masses will follow.

The number, in the area of “transformation” is said to be 8%.

But only a small percentage in really poor countries are interested… not in China, not in Russia, not in the United States, not in South or Central America. Some small Asian countries, most in the Caucasian Mountains… Nowhere near the critical mass…

So, you should ask: what does it feel like to live a life that doesn’t make a difference for others?

I have a two-fold answer for you: the moment I stop wanting to make a difference for others, life is good.

The moment I put my attention on you, life is not so good.

In some weird way I have been able to straddle this controversy, and recommit to my own growth, most days, and consider my writing a useless gift… but very useful to myself.

If not, I will hate my life.

So what should you GET from this article? That as long as your life gets its value from “others”, you’ll be miserable.

Your job is to pull back your attention and stop worrying about the results others see, and stop looking in their eyes and seek to see your value.

It is the surest way to live a miserable life, because you are now two… not ONE. You may even be a crowd, not One.

PS:
OH, and let me give you some warning: Truth REPEATED is a lie. It’s the hollow shell of truth, not the truth any more.

One of the damaging effects of Facebook is the quotes: all those repeated words are lies… because they are NOT your truth.

The following video is all lies… as far as you are concerned. For me it is 9% truth and 91% b.s. It can’t make a difference, but gives the illusion of progress… more pretense… as if we needed more…