Two years ago I ran a big course, it was long, and it was amazing: Activate Divinity.

One of the distinctions in that course was “bringing the divine to everything”.

This is my secret to life: bringing the divine to everything. Living meditatively, instead of meditating. Communing with Source instead of going to “church”, or praying…

The movie that was teaching it best, at the time, was “Babette’s Feast“, a Scandinavian movie that I really loved. It’s part of the course…

But another movie has been pushing itself into my consciousness at least every other day, without me ever stopping to wonder why.

The movie is called “Chef” made in 2014. It is again about this “bringing the divine to everything”… which is in a chef’s case mostly means: every dish, every sandwich… everything.

Now, there are two main lessons in this movie, Chef, the other is at least as important, and it’s this:

Many of you find yourself in a limbo, because you want to do something meaningful, but what? And how to start? And if that is not you: it will be… life has its twists and turns, so listen up.

Our chef is slaving away in the restaurant of a controlling owner who is interested in repeating what works… but there is nothing divine for a chef in that. A chef needs to create, and making the same dish over and over is not creation, it’s work. Tedium. Soul eating. 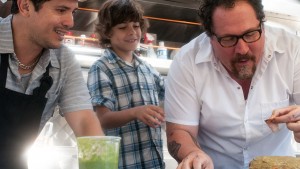 But there is no changing course that would take him from where he is to where he wants to be: someone who can create and enjoy other people eat it… Not possible.

So he quits, and gets a food truck where he sells the best Cuban sandwiches anyone can make…

That is his stepping stone.

Some moves take two-three stepping stones, believe me, I have been there.

But if you are like most people, you won’t bring the divine to your in-between jobs, and you get stuck there.

T. comes to mind who is a spectacular, inventive, experimenting cook… and she can’t see her way to her next restaurant… because she doesn’t know about the stepping stones.

And R. who wants to swim with the dolphins, but is stuck in a secretarial (I think) position, because she is afraid to go towards a stepping stone.

A few articles ago I told you about the guy I advised to die well, even though he can’t change the past when he didn’t live well.

If T, and R. and countless others don’t move, you’ll have lived poorly… leaving you with the option to die well, at least.

Staying put because you don’t know what else to do…
Doing as little as you can, because you aren’t working in your ideal job…

These are steps inside a life lived poorly… Wake up, and make your move!