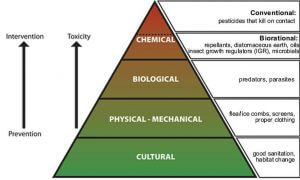 What do I know about eliminating pests?

A few years ago, all of a sudden, there were tons of flies in my house. I am not sure how it happened, but it was a real pain.

Picking them off with a fly swatter, one by one, was “good fun” but not very effective.

I did a lot of reading, and found that

Flies, just like other pests, seem to live for one purpose: to reproduce. They eat to reproduce, they are lead by every fiber of their being to reproduce.

So, if you can find out what attracts them to where the other sex is, and you can trap them there, then you can manage their population.

Flies can be attracted by pheromones.

Now, I have no idea how scientist came up with the trick to create artificial pheromones, but they did and it works.

With regards to the mites: it is a harder thing:

So, I started to meditate over this issue. It is obvious to me that most mites cannot be eliminated, because just like flies, they are all over the place, and you can’t clean your space and be done… they, the flies, really don’t care about your boundaries.

I read somewhere on the internet, early on, while I was dealing with the ear mites, unawares that they were just the top of the heap, the visible element. What I read is that they bite to get hormones from you.

True or not, immaterial, the behavior is proven: they are looking for hormones from you.

So I constructed a mite trap that had hormone-rich substance inside, and a virtually no exit type of entrance. Just like I have seen they use for flies.

I made the trap and lo and behold, within a day there were hundreds of mites inside the trap… Seemingly the trap was the same, so I had to use muscle testing to get the information: invisible mites are invisible in large quantities as well.

Then later I shelved the idea, because ear mites were so easy to get rid of.

But nowadays, when the itch mites are causing me unspeakable torture, sleepless nights, I dusted the project off, and set up another mite: same trap, same lure… in less than a day, 30 itch mites inside… Don’t forget, I have been working on this project for five months…

In the membership area of my biting-mites.com I’ll reveal all about the traps… they are self-made, it isn’t worth my time to make them, and ship them. It’s easy to make, relatively.

How effective are these traps? The final word is not in, but consider this: every mite that is trapped is a mite that doesn’t feed on you, doesn’t crawl on you, and doesn’t reproduce.