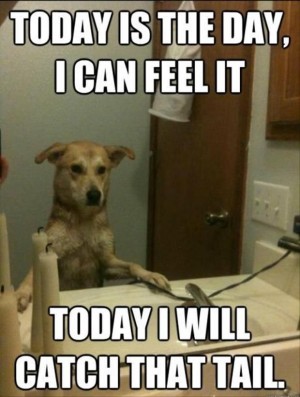 The anxiety attacks you experience

There are two types of anxiety attacks, as far as I can see:

If I wanted to design a system for unhappiness

If I wanted to design a system for unhappiness, I would broadcast, popularize, teach this: “You can do anything you want… Because you can.”

The truth is: You can do anything that you have capability, talent, and diligence towards. 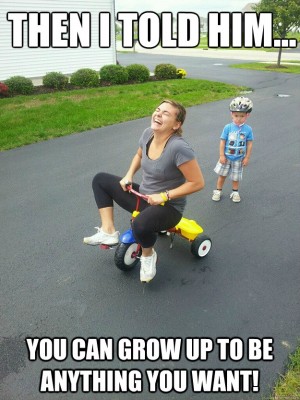 The most important element is capability

One of the most discounted part is your intelligence. It is being discounted to match the egalitarian system we live in… teaching that we are equal, but it is a lie.

You want to make an African American call you a racist? Tell them that they have, genetically, a lower IQ than another ethnic group, doesn’t matter which.

This is why geneticist only deal with health issues: you cannot touch the intelligence issue, if you want to continue getting a paycheck.

But the truth is that each ethnic group has a different level of intelligence, that doesn’t change in a lifetime

On the group level this is documentedly true. 2 On the individual level the Bell curve applies: every ethnic group has smart people, average people, and less than average people.

When I muscle test people’s vibration, I often also muscle test their IQ. The average IQ of the readers of my site is very low. Why? Because people who have a higher IQ are busy doing something useful in their lives, and they are succeeding…

The “You can do anything” saying is more true the higher your abilities are, including your intelligence. Obviously… 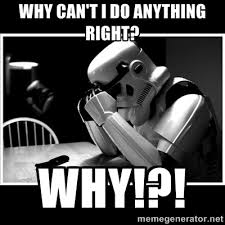 Most people that visit my site are waiting for, hoping for divine intervention. They also want to feel better, after all the anxiety the high expectations/low results creates is horrible.

Can you change your attitude? Of course you can. Will you? I don’t know. You’d be better off if you did. There is plenty to achieve on the ability level where you are. But what it requires is telling the truth. And stop pretending that you are better than you are. Smarter than you are. That you could do something, only if… you lived closer to the ocean, you were thinner, younger, prettier.

None of that matters, it is all a lie.

The cost of thinking you should be better than you are

Confidence develops with realistic thinking and lots of failures overcome 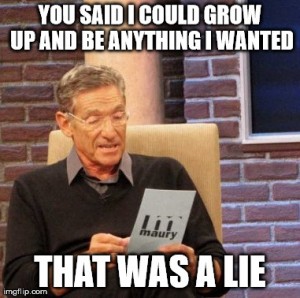 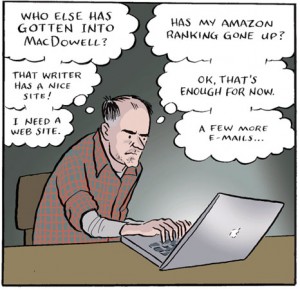 You need to do a lot of things, lot of new things, to develop a sense of what you can do. To realistically assess the boundaries of your abilities.

Movies like “Charlie” are favorites, because they show a magical way of becoming more than you are. Intellectually.

I used to dream of having a funnel channel all knowledge into my head… so I can know more. We all do magical thinking, some do it occasionally, others live there.

But, you have most likely ended up in a job that you can do. You may even be able to do it well.

But if it is not your dream job (that is not a good match to your abilities, so it remains a dream job), you probably do it, intentionally, poorly, because someone has to pay for the failed dreams you developed as a result of the “you can do anything” myth. Your employer.

If you believed the “you can do anything” myth, your IQ has, most likely, dropped below what it was when you were a child. Why? Because you are not using your abilities. You are not challenging yourself.

The biggest cost of this “you can do anything” myth is that you will teach it to your children, you measure your children by it… and you are killing their spirit.

I have a few clients who are mothers, and are really effective at poisoning their daughters. Probably they are poisoning their sons as well, but they don’t talk about that.

Finding out what you are good at, your abilities that you enjoy using, is the biggest gift you can give to yourself and your children.

I was really lucky that my parents didn’t expect anything from me: I was their dumb child. They were so sure I was dumb that they didn’t even see my achievements. My grades were always higher than my brothers’. I won Math competitions, competed in physics, was an accomplished musician, spoke four languages… they never noticed.

This allowed me to do things well for the sake of doing them well. And learn to enjoy the process and the victory, without anyone paying any attention.

How do today’s charlatans, false gurus, false healers use the myth of “you can do anything”?

Transform yourself, release the limitations that have been holding you back from living the life you want to live and expand into the Quantum Matrix that brings life to you effortlessly.

this quotes suggests that the limitations are not inherent to you and your physiology, but are emotional, energetic, blah blah blah. B.S.

The situations, events and people in your life are the manifested evidence of your beliefs.

if this were true, you would be a giant, a genius, omnipotent. It’s another B.S.

This quote suggests that the perfect partner is a perfect match to your best self. But the truth is that you attract the partner to the worst of your self… because that is where you spend most of your time…

Honestly, having worked with thousands of people who used the Unconditional Love Activator, I can tell that the best path to loving yourself is accepting yourself exactly the way you are. Not better, exactly the same. That the best way to be at peace with yourself is to drop the high expectations of yourself, and just be who you are.

This quote suggests that your true self is beyond who you are afraid you are. The truth is, your True self is your worst self… Once you accept it, you can grow from there.

Don’t accept it? Be prepared for anxiety galore.

If the author of this quote meant “get real” then that would be an enormous transformation… delivering exactly what it promises.

Feel the misery? Feel the anxiety?

So you see, living in the world, reading so-called teachers’ quotes, memes, Facebook, strengthens your sense that you are not who you are supposed to be, that you are less. Fell the misery? Feel the anxiety?