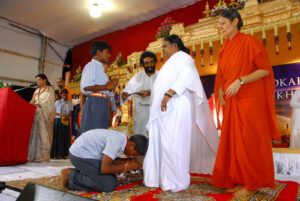 OK, I was browsing for other people’s reviews, and found this. It’s pretty good… I will add my vibrational review to it, probably in a different color for you to see what I say and what “she” said… She is the author of this post… Lady Miss Neptune, from NYC, I think.

There is a stench in the spiritual community becoming more and more apparent as time passes. This stench is coming from the famous and influential names in the community. Those who in recent years have created much fuss over nothing. Those whose teachings are false, deceptive, empty, mundane, regurgitated, and only serve to maintain the status quo, all the while deluding followers into believing they are worshipping a most high-caliber being or following an ultimate form of teaching.

A most important virtue to cultivate is discernment, as we embark on our journeys and pursue our spiritual goals. Discernment is key when it comes to raising our consciousness and making any kind of progress on the spiritual path. Without discernment, finding the presence of falsehood in a teaching of a guru and therefore attaching ourselves to a false guru we encounter can set us back for lifetimes.

The common fallacy for many people is to believe that because they do not follow a mainstream religion, then surely they must be on a better track. This is far from the truth. In fact most are being led by wolves in sheep’s clothing.

My question is, if you dare to question the institutionalized religions (i.e. Catholicism, Christianity, Judaism, Hinduism), why doesn’t it ever dawn on you to question the “unconventional” stuff?

Simply because a guru or a teaching is unconventional, does not necessarily make it better than the mainstream. In actuality, some of the newer gurus that have risen in recent years are the same types of ego-maniacs that have run the established religions for ages. These new gurus are only in place to prop themselves up as the latest brands of ultimate authority and to feed off the energy that we give them with our attention. Their sole purpose is not to encourage self-sufficiency, but to keep us running in circles, chasing after our own tails, and chasing after them. They serve only to keep the old adage of idolatry intact, and to keep the old game of superiority vs. inferiority playing along indefinitely.

It truly is getting quite stale here in the spiritual community.

I expect there will be those who disagree with this post as I take each “leader” off their newly-erected pedestals. This is only my personal opinion based on personal experiences and insights, and you of course, have the right to yours. Simply offering food for thought.

My advice is no matter how devoted one might be right now to a certain guru or teaching, always keep a constant vigil on your discernment, on your intuition, and hone them both like a knife.

Lastly, always, always keep in mind how in the end, the emperor had nothing on.

2 thoughts on “Vibrational reviews: how other people do it”