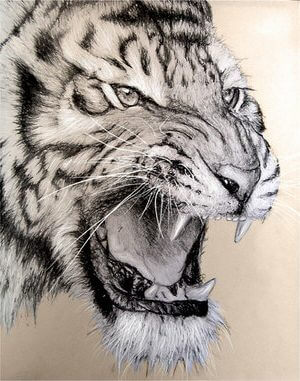 You can’t catch what you don’t see; do you keep them sacred like a great white tiger?

I was wondering what I should write about today.

I have half a dozen half written posts, but what should I write about today?

Then, as I was doing some energy work on myself, it came to me.

I have a young friend, he is about 4. He is my chiropractor’s son, he lives in Baltimore with his mother, but for about a week every month he is in Syracuse, and I always make it a point to spend a few hours with him.

Today was the day, and we were playing, and singing, and laughing. He goes to school, and he had learned a lot of new songs, so he was singing a lot today. One of the songs was “You can’t catch what you don’t see”

That is what I want to talk to you about today. That you want to see what you don’t see. Most people that I know, especially men, don’t want to see it. Too bad. If you can’t see what’s keeping you where you are (because you don’t want to see it) you are stuck with there! That’s all there is to it. No wonder there are so many insignificant people, underachievers, could-have-beens, wasted talent out there.

It takes courage and a certain maturity to face the white tiger.

This reminds me of one of my favorite stories about the great white tiger and children’s dreams.

In India great white tigers are sacred and can’t be killed, so you can imagine what it’s like.

The researchers asked every child in the village about their dreams. This is what they found:

I assert that the majority of the population hasn’t arrived to the level of maturity associated with 13 and up. How do I know? Because they are stuck in one of the younger ways of coping with challenges, with hiding, outrunning, outsmarting them, instead of really facing them square.

In the Michelangelo method we face the issues and eliminate them, one by one, so people can spend their lives accomplishing their dreams, fulfill on their potential, and live their life as the masterpiece they were intended to be.

You can’t catch what you don’t see.

This is not a game for kiddos… Are you up for the white tiger?