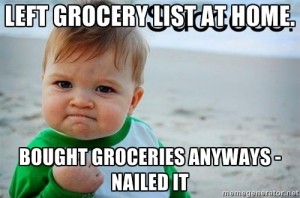 Every success proves nothing. It can be luck, it can be accident, it can be smarts… you can’t be sure.

Finally I gave it up and sighed a sigh of freedom and relief.

You are the same way about being smart… or whatever is your issue. (Some people have an issue with being liked, loved, valued, respected, etc. But I think everyone has some issue with smarts. I could be wrong…)

My recommendation is that you consider the Forrest Gump saying: Stupid is as the stupid does… i.e. the only stupid thing you can do is not judge accurately what you need to see to make a good decision.

If you rush, or already know… the action is stupid, and that’s that.

So instead of looking at all the things that you do right, and think you are smart because you did well, you should improve your mistakes…

Your results will double, triple, quadruple, depending on how stupid you have been… said in another way, to what degree you are NOT using your intellect: your power of discernment.

Now, a new aspect… this will be really tough for most of you:

The modi is to teach you two things:

Both make you stupid.

Now, what happens as a result? When you look at ANYTHING, this created “vision” displaces what’s there. It makes it “not that” or it makes it, if you are optimistic, “the right path” or something like that… proof that you can do it.

What you don’t see is what is most important to making a decision: what is there?

Most people make the exact same mistake… let me use an analogy that everyone can understand:

When you imagine yourself on the top of the tree, you can’t see the tree for what it is… a series of branches taking you to the top.

You either think you can’t do it, or you think… I can just jump to the top… easy peasy.

Neither of these thoughts relate to reality….

You first need to get up to the first branch. It is already hard enough. Then you need to climb from branch to branch.

Each climb is a victory: you work your way up to each branch.

Most things you want are only doable if you can manage, design, sustain a huge project.

Most of you can’t even sustain a simple spiritual practice, let alone a many phase project.

But it’s normal: you need to build up to a big project. All the people who are accomplished, did it that way.

I am not talking about movie stars… they possibly didn’t do anything to earn their fame, that’s why they can’t stay sober, they can’t tolerate the gap between their little self and their Self.

PS: I just realized I said nothing about the first way “they” make you stupid: they say that your actions come from your thoughts and beliefs. Not so.

So the most important thing to manage is what you see… really! And that is manageable… You can alter what you see, etc… I have been teaching you that, you just never got it, because you think thoughts matter, feelings matter, beliefs matter… but they don’t.