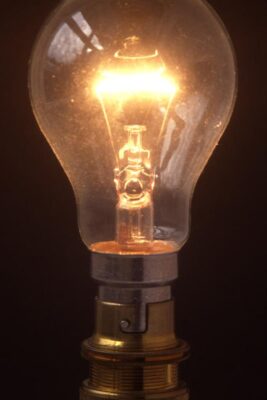 What do a light bulb and transformation, raising your vibration, and gurudom have in common?

What was the genius of Edison? Ask 100 people and none will have the answer. They will simply say: he invented the light bulb. Or they will say: he tried unsuccessfully 1000 times, and never gave up. Then you ask: why did he have to do 1,000 unsuccessful experiments to get to the solution that worked? At best people say: because the filament always burned out… but how he solved it, 100 out of 100 people you asked, won’t have the answer.

Why, because the genius of Edison is that he went waaaay off the common thinking. The solution wasn’t even near to what everyone thought.

What was the solution?

999 experiments were about the material of the filament and the gas… none worked.

The solution that finally worked for Edison was alternating the direction of the current.

When you change the direction of the current, first it has to go to zero, and then back to the same voltage, amperage, but in the opposite direction. The filament, by the way, only cares about the numbers, and the number went down to zero… yaaay, so the filament had a chance to cool off.

So between two moments of high burning, there were a few moments of cooling off for filament. That is the secret of the light bulb.

Now, let’s look at another challenge: the light needed to appear continuous, otherwise it would kill your eyes, right? You would get a seizure… ugh.

From movie making history we know that 24 frames per second gives the illusion of continuity. Alternating current is 60 cycles per second, your monitor does 60, 65, 70 refreshes per second, so it seems that you have a picture all the time, but in fact you have 60 or so pictures with no picture in between.

Now, let’s look at facts: does the direction need to be alternated, or is it enough to turn on and turn off the electricity, much like when you do Morse code? Of course, from the filament’s point of view it wouldn’t matter.

Now, whether this is what Edison did or not, it won’t matter to us, this is how incandescent light bulbs, monitors, movies work: based on an illusion. Based on our eye’s capacity to hold onto the picture longer than it exists.

Why is this important and why am I bothering you with knowledge that you don’t need?

Because this knowledge sheds light at a human phenomenon that you need to know, otherwise you are screwed.

Life has only one constant, and that is change.

The moment something comes to be, it instantly starts to disintegrate. That is the law of entropy, or at least for our use, that is.

Before that I had stagnated at 940 for quite a few months.

The two things worth examining,

The stagnating at 940: the answer is: there is no stagnating in the Universe. I was simply matching the entropy with equal amount of growth, and I appeared to be on the same level, continuously. The real truth was that I was jumping up and down, between about 910 and 940, several times a day. Just like the light bulb.

It was, in actuality, a lot of work to jump back and jump back each time to 940, but I did it.

As you may know, my Achilles Heel is superiority, I often act superior even to Source. (ugh, right? lol)

Every time I caught myself being that way, being used by the ‘evil inclination’ to feel superior to someone, or feel that I don’t need Source’s guidance because I already know, or know better (lol) I stopped and admitted what I just did. And often I admitted it to my students, to my clients, to the public through a blog post.

You can’t be very superior if you admit what a ass you are, so it effectively lowered me a notch in pride, but returned me to the 940 in vibration effectively.

I didn’t like what I saw, but I was willing to do it. You know, like taking medicine that doesn’t taste good…

So I admitted, publicly, that I allowed some people to skew my perception, to buy my services, my goodwill, with buying all my stuff, complimenting me, driving me to the grocery store, or some other errands.

I had been tolerating that, maybe even enjoying that, until I saw what it’s costing me. It’d cost me my power to make a difference. The favors bought more than just my kind attention: accepting them allowed these students to get off the hook and bask in my vibration, instead of earning their own.

Telling the truth, AND giving up the perks was hard. My mind was screaming: Don’t do it. You need them!

But I am not my mind

Had I listened to my mind I would still be a miserable little architect somewhere in Hungary, or maybe even dead.

So I went public, and I earned some twenty of that 30 point jump.

I earned the last 10 by allowing Source to suggest a question instead of asking from what I already knew. This is how ‘The Unbreakable’ energy was born.

I have been paying attention and there is an even more unusual question wants to ask itself… but I haven’t given it a chance, yet.

And to close this article, here is another aspect of this light off/light on phenomenon:

One of the things I need to do, diligently and against my evil inclination: destroy anyone’s illusions that I am a guru. (But I am, I am… screams the mind. I am going to ignore that, but I am sharing it with you, so you know what I am up against… lol)

Why would I want to avoid being treated, being talked of, being revered as a guru?

Because when you accept that (it’s a form of bribery, if you are aware enough to realize) you just shot yourself in the foot.

Because the only way to stay a guru (a guru really, not just in name) is to allow guruness to be destroyed every day and rebuild it. You have to show your vulnerable underbelly, your nastiness, your sleaziness, your un-guruness, often, and generously and consciously, intentionally.

When you do that, you are not a guru. Right? You expect your guru to be up there, on a pedestal, not down there with you in their nastiness, or even below you if you are one of those ‘holier than thou’ types… the ones that are most attracted to a guru.

Who would want to revere in a guru who is just like them… right?

So, to avoid all that, I am not a guru. I am a normal person who earns her vibration every minute of the day, exactly like you are supposed to.

The fact that this will make me attractive, or even acceptable only to a tiny fragment of the population doesn’t bother me the least. I’d rather work with people who are willing to change, than with people who give lip-service but are evil, slothful, nasty, and dressed in white robes.

Can you blame me?

PS: I wrote this article 10 years ago.

What made me re-publish it is yesterday’s Intention Training.

To my horror I found out that every single one of my students secretly thinks that they are smarter than me. That they know more, better, different than me.

So they don’t follow the instructions to turn on intention… and get to the vertical plane. The variety of ‘doing your own thing’ is surprising. If they brought all that creativity where it’s needed, they would be world class.

But they bring it to where it renders them stupid. Ineffective. And ground bound.

On the vertical plane all this comparing yourself to others to feel good about yourself goes away. You can be as smart as you actually are, and it will be OK. And other people can be a whole lot smarter and it won’t touch you. You’ll be untouched and untouchable…

But you can’t get there if you need to be smarter than me and do your own thing. It is a very specific sequence of actions… to turn on that switch.

Apprehensive of what it takes? I’ll let you take a peek for a song…

Spy on others as I train them
I can hear the wheels turning in your mind. You think you don’t need me to train you. And unless you are an empath, you have no idea what actually happens inside, and you won’t have the benefit of me telling you what you are doing wrong. And chances that you’ll do the right thing are between zero and none, judging from other people’s actions… None.

Anyway, if you are not willing to spend ten bucks to find out what is what, you should get off my site, get off my list. I don’t want you. I mean it. Ugh, I feel myself tightening…

PPS: The main reason for misery of humanity is the horizontal aka competitive plane, where people compete with others… instead of becoming the best they can become. This competition creates this horrible misery.

1 thought on “What do a light bulb and transformation have in common?”