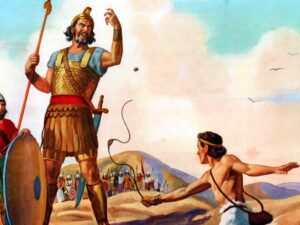 How and why what we do here is the perfect antidote to what ISIS is trying to do?

Whether it was David who was the underdog, or Goliath… the picture of using wits against blind stupid force is depicted well in that story… and besides that, when I looked how to illustrate this article, David and Goliath popped up… and I trust my guidance.

I will put the book by Malcolm Gladwell, in pdf format, in the subscribers area.

I’ve read half of an online article on ISIS, a really long article. Being dyslexic, I could not read it online… I have copied it and republished it for you.

And this is what they are doing: it seems that the prophet predicted the Apocalypse… what else is new. But this one is with a twist: this one you’ll cause… it is your job as a good follower. Cause it.

The strategy is to cause mayhem and havoc. The weaklings, not fortified by the prophet and the only god, will annihilate themselves.

And, if you look, it is happening. What is going on now is testing.

Testing how much damage causes how much mayhem and havoc, and how far.

Mayhem and havoc have their roots in fear and cowardice.

And the entire history of humanity is based in fear and cowardice. Putting trust in factors outside of oneself, personally hiding, lying low, fretting, and doing nothing.

Now, do they have a good chance to do what they want to do, I mean ISIS?

Yes, if you stay the same, if humanity stays the same.

Why? Because it takes capacities that never opened up, even though they are encoded in your DNA. In everyone’s DNA.

Living the life of a selfish little clod of ailments and grievances doesn’t make capacities open up, because they are not needed.

It is need, it is hardship, it is suffering that naturally opens up capacities.

People use that for grief, for being evicted, for having a fright…

Hell, compare that with stories of survival as on a remote island. In a cave. That will activate capacities that had lied dormant for ever… and make you use them, because you need them.

The nature of this new threat, unfortunately, won’t do anything similar… at least I don’t hope so.

Awaken and activate the capacities without the suffering.

I have been doing that for two weeks now. The number of capacities that people actually “actualized”, i.e. were able to notice is still low… about 20%, but as I get better at guiding people, I hope it will grow.

Now, why activating capacities is the perfect strategy against the threat that ISIS is?

By the way, people suggested I activate the few million members of the Islamic State… and because of the elevated capacities, because the killing of the desire to receive for the self alone, they will think better, and let you live…

Isn’t that exactly the same as you have always hoped? That evil will disappear and you can continue your little life?

No, I think you won’t get away with doing nothing this time, my dear.

It is time to become unflappable, a humanity that can stare a handful of vigilantes in the eyes, and say… “You? What were you thinking?”

So what is my, our strategy?

To activate as many of the human being capacities on the planet in the shortest time possible.

Through the very diverse group of my students.

A DNA activation, I don’t know why and I don’t know how, is retrospective, if an when it is activated with Source energy.

The meaning is: if and when a capacity is opened and activated then your children, your siblings, your aunts and uncles, your great aunts and uncles… and their offspring get the same capacity activated and available for use. All the way back to your ancestors back maybe thousands of years ago.

Is this true? I have seen it in action. My brothers children suddenly changed and became adventurous and self-trusting when I activated my capacities that are in the unconditional love activator… 19 capacities…

I didn’t decide it, the energy decided it. And maybe that is why that particular activator works so darn slowly… because it is attempting to open and activate capacities the recipient doesn’t know he needs to use.

So instead of bundles, nowadays I am going for individual capacities. It is more work, but at least you know what you got, so you can do the work.

I knew this was going to be an issue: you see, while you have your hand out, and believe that you can get everything you need from the outside, you won’t grow, even if I activate all 160 capacities.

You will need to do the inside work.

Some will, most won’t.

And you will do some, and you’ll get what you earned.

But even some can stabilize and transform humanity. People with capacities are like people with an infectious disease… they spread the goodness.

How? Is it done consciously? I do not believe that it needs to be conscious.

Actually, people with capacities that “kick in” in crucial moments in life, are stunned by the results… suddenly judgment dies as it is born, arguments die as they want to get out of your mouth, you have thoughts that you never thought yourself capable of, you talk when previously you’d be mum…

Not as dramatic and obvious as novelists would like us to believe (Flowers to Algernon is a novel that illustrates this process, exaggerating greatly. But it’s a good story, read it. I think I have it in the subscribers area in pdf format).

So working with these three could be enough, but I don’t think it is.

Working with all my students gives me a glimpse at the bigger picture, shows me the need for capacities I would not see if I only worked with the three GK students.

It’s going to be fun.

And the third strategy is to activate crucial core capacities to my subscribers that are willing to show up on my free webinars.

With these steps, with these three groups we can be sure there will be enough movement planetwide… With crucial catalysts on every continent, so we can “infect” every single soul to stand up for themselves, to become more, better, so we can just shake off this threat like a nuisance… and become the species we are meant to be.

We are meant to be activating all those capacities, otherwise they would not be there… would you agree?

So even if you are religious… your god would not create something and mean it to stay dormant forever, right?

PS: If your “desire to receive for the self alone” kicked in, and you are not resistant and angry that the people in the slums will have the same capacities as you, who are educated and hardworking… chill out.

Free will will sort it out.

Getting the capacities opened is only a potential.

There will always be poor and rich, educated and ignorant… leader and follower.

Free will will take care of that.

2 thoughts on “The perfect antidote to what ISIS is trying to do?”