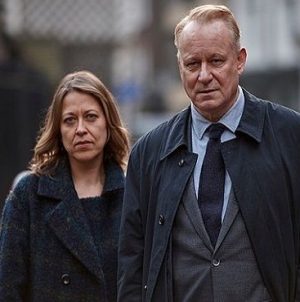 The mini-series I watched is called River… we could have called it Riveting… because it is. For me…

River is a police detective. His long time partner, Frankie gets murdered: shot from a moving car River didn’t see, doesn’t know who shot her.

River sees and talks to, converses with dead people, especially Frankie. The love is tangible between them, between River and Frankie. The story isn’t about being a psychic, afterlife… not any of that… please continue reading, without preconceived notions, or you’ll miss what’s important to you.

The story is about River’s investigation into her death, and into her life.


She says to him, the dead Frankie, to stop because when he finds out who she was it will be bad.

Without the dead being able to talk, say that there was something she never said, we would never know how the past completely ran the present, their relationship, and her guilt.

I am thinking of what she did that was so terrible that she took it into her death. I have never done that… but I have done stuff that I am not proud of… this is code for: I am ashamed of. I feel guilt and shame about, and regret. Before, I would never have wanted someone to know, being sure that they would stop loving me. I also kept people at arm’s length… and still do.

And although I have “taken responsibility” for my sins, watching the story unfold, and now for the second day, I can just cry. For the people I hurt. Verbally, mostly, but words hurt.

I passed on what my mother gave me… and the machine-like, zombie-like force to do what she did, did not allow me to be anything other than what my mother was… Quite a monster.

I have been “machine free” or “mother-free” for quite a while now, but yesterday, probably so that I can see how my students are… what it’s like for you, how you are run by the behaviors of your parents, I acted out the same place of anger, disdain, and lashed out. Ugly.

I literally could not stop… this is what I used to call “being jerked”… jerked like a rag doll.

I don’t think Hitler ever had a choice…

Why I am talking about Hitler? Because, in my “innocent” and ignorant little mind, if Hitler hadn’t killed my whole family, I would have had grandparents, uncles, an aunt… someone to love me, even though my mother didn’t love me.

But, of course, until this very moment I’d never thought that neither of my grandfathers was a nice guy, and I was probably better of not knowing them.

You, unwittingly, unknowingly, in a zombie-like way, abuse people in your life. And deep inside you know it. Deep inside you feel the guilt, the shame, the regret.

It is time to go and dig them out, dust them off, and tell the truth about them.

It’s time to look at your abusers with compassion. They didn’t really have a choice… being zombie-like, pre-programmed is how humanity is, on this stage of evolution.

So, how do you get past it? Because, believe it or not, unless you get past it, your vibration won’t rise, and your ego won’t allow the new DNA abilities to stay active. Because the ego is sure that if those capacities stay on, it will die… so it turns off what it perceives as threat. A threat to itself… the not-self.

The Unconditional Love Activator is a bundle of energies and feelings. It’s five DNA capacities, bundled… Ego cannot turn them off that easily. Just like Dark Side cannot easily deactivate the Heaven on Earth energy, because it is a bundle of 40 energies… Dark Side doesn’t have the key.

When you have the Unconditional Love Activator, infused in your water, you create the perfect safe space for you to do the work. You still have to face the ugly, your own ugliness, but because both of your selves are on your side, you can. It’s a safe space.

Your goal is to have compassion for the zombies that hurt you… and for your zombie self.

Your zombie parents, or the zombie rapist, whoever he was, was a victim too. They suffer the regrets, the shame, the guilt, just like you do.

Compassion is being able to see that their actions have caused them suffering. See them as you want to be seen: with love. See that they didn’t have a choice.

The moment you can bring compassion to your perpetrators, your own perpetrations can be accepted as wrongdoings, and you can put them to bed, to the past, so they stop being in the background spoiling your life, today and in the future.

The Unconditional Love Activator can do more than just this for you, but this is the most important job you can ask for… because unless you do this, and you do this in earnest, you will never free yourself of that shadow… Never.

PS: Recently two students had a breakthrough. They and I have been pondering what of the many things we did and they did cause the sudden turnaround.

Get the version where I speak out the difficult statements that are expressing the state of Unconditional Love… The connected version.

Get the Unconditional Love Activator

3 thoughts on “That sadness, that grief… what is that about?”