The more temperamental a group is, the easier it is to dominate them, to play them, to incite them to kill, go to war.

The Irish is a temperamental bunch, and the killing, terrorism, has been going on for many centuries.

Yesterday I asked myself: would the Irish self-destruct, stop their human evolution, remain a bunch of wildmen, without an outside interference. The answer was: probably not.

Incite discord between two groups, and let them kill each other instead of you. 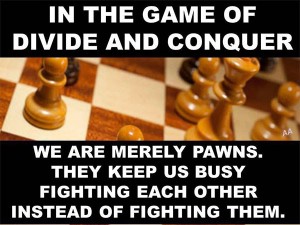 I first encountered it in the books I read about Genghis Khan: the Chinese used this weapon of destruction for centuries: commit atrocities, make them look like another group of Mongols, or other steppe people did it… start a war…

Worked well until Genghis Khan discovered it by accident.

It happens in scale large and small, all the time, everywhere.

It takes someone intelligent, astute to see… to see below the hood.

And then it takes someone who has the courage to yell: the king has no clothes…

Without you starting to pay attention to the underlying dynamic, to look and SEE below the hood, humanity will continue concentrating its efforts on warring, instead of the evolution of the human race. Drama will pull you out of your path… unless you see that it is incited, designed to take you off your path. Then you can stay the course, and not get distracted.

It is an unconscious desire of others to cause drama… the very few people I actually talk, outside of this work… they all do it. If you confronted them with it, they would say you are wrong, or maybe even nasty.

So the job is not to let them know that you know what they are trying to do, the job is to include their drama, and not move an inch to the left or to the right.

Agreement, feigned, is the best weapon of the intelligent. That is often NOT YOU, sorry to say.

But it could be you… if you could see what is going on, really, under the hood.

OKastuteness capacity, if you take the time to use it instead of knee jerk reactions, can be really useful here.

4 thoughts on “If it sounds true, it is probably false. If it sounds not true: it is possibly how it is…”