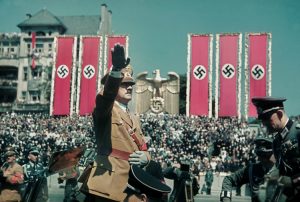 I am watching the series on Netflix, World War II in color.

I am watching it through the filter, through the glasses of the spiritual capacities encoded in the DNA…

You need to know some personal stuff about me: I am the child of Holocaust survivors. Out of a big family, only my parents, and three second cousins survived.

But I am also an empath, a true empath, and am interested in causing a world with no wars, no hate, no incompetence. The evolution of the human race… to the level of human being…

These are my unedited notes… written in the midst of the experience… I am sure I’ll regret publishing them… It is hard to stay detached… so I allow myself to root, hate, anger… get involved… Even though I know how it turned out… I watch it like a suspense movie. Very interesting.

My goal is to see something. To teach what I saw. So you can learn from it.


Some of what I say sounds downright racist… hell… I might just be racist… We shall see.

Th first thing that struck me is people flocking to the Nazis, like chicks flock to the mother hen… No second thoughts.

The second thing that struck me is the duplicitous, moronic, no integrity ways of all the leaders who were called the Allieds and the Soviet Union. Obviously no spiritual capacities, and no intention to get any. 1Politicians, as a rule, don’t have more than 10 capacities. Not that they don’t need them: they don’t have them. On the other hand, the brilliant fictitious character, Madame Secretary on the TV show, played by Thea Leoni (7 capacities) had 20 capacities… not found in real life. A real life foreign secretary Kissinger had 10 capacities. Hillary Clinton? 7 capacities)

The third thing that struck me is how ingenious, how effective, how brilliant the German were in their strategies, while their humanity, was missing almost as much as that of the British.

The Germans were definitely a more intelligent, more capable nation… and the capacities they possessed were all grouped in the area of technology, warfare, thinking, even creative thinking, focus of thought, being a leader.

The British war-makers worked from their head and completely ignored actuality, reality… heads up their asses. But some exceptional scientists, dramatically different from the masses, from the politicians, actually managed to get to the hearth of the matter, and win with brain, instead of brawn. Amazing.

The average German had the capacities of system and process in spade.

The French had camaraderie, and heroism.

I am alternating between sobbing and observing… must look funny for someone watching me.

OK, Hitler: 10 capacities working. Enough to come to power. Enough to dupe millions and millions. But not enough to create and execute a winning strategy of war. Impatient, jumping around, making blunders.

Believing his own interpretation of things, he fires his decision making, war experts… and loses the war.

What capacity was missing? System, process, resilience, flexibility, and astute.

Brings it down to human level, doesn’t it?

And what is Life Force, what is desire, ambition, and greed?

These are the questions I have been pondering, muscle testing, and answering on my current level of knowledge next.

And the last question is: could we call these capacities life skills?

I will do this in another article: it will be easier to deal with… I think. Although reading about Hitler… that is very educational.

Here is the link to the article that answers the questions I posed above:

PS: did my first impression offend you? I apologize.