I once had a boy friend who refused to have sex with me when I wanted it, saying that I was using him. When he wanted… that was OK.

This article is a little sloppy, stream of consciousness… let me know if it is too sloppy… please.

I just had an interesting conversation with one of my students.

I have been suspicious as to why she was less than enthusiastic in her course work for the 67 steps coaching.

So I asked, this morning:

…answer one question: why are you in this program? What would you like to get out of it?

Fair question, right? You need to know why you are doing something if you want to do it well.

This was her answer:


I am in this program because I want to be exposed to a new way of living or being. I think there is more to life than just 9 to 5. I would like to make a difference. It doesn’t have to be a huge difference. I would like to be a benefit to myself and least one other person. As it stands what I do either benefits me OR someone else.

Let me ask you something: is this a common way to relate to the world?

That either you benefit or another benefits?

This never seemed true for me, so I have no idea how many of you think this way.

This is a world view of the Either/or, or Orness…

But it is a world view, not the truth. Energetically, this is rarely true.

As an intention: it can be 100% true… this is what I call EVIL, the desire for the self alone… i.e. having what you want at the expense of another.

But in nature, this is rarely true.

Living that what you want for yourself comes from another, or at another’s expense is the fastest way to stop wanting, to stop expanding…

If you consider yourself a good person, then that is what you should do… if this is your world view.

I don’t even know… is that a religious world view? Where is it coming from?

People, animals, plants live in a give and take, you AND me world, where only a few species are willing to care nothing for continuity of life… some parasites, some bacteria, some viruses. 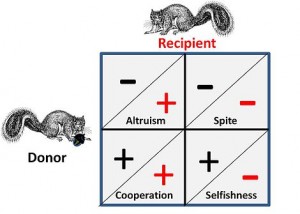 Not many, compared how many species exist that live in a world (world view) of non-competing, allowing the other to live too.

You can do the exact same action from both world views… but how you end up feeling is very different.

But if you have this world view of winners or losers, of life being a zero sum game, then you view yourself either a winner and hate yourself (because you are good) or be a loser, so to avoid being a winner.

What is zero sum game? A game where one must lose for the other to win. Basketball games, chess, most wars…

You can win while another is winning.

But you will play life according to your world view.

If you are playing life as a zero sum game, you are either the victim, or you victimize others.

Not a good life… even if you win.

So, what is the capacity that allows you to see life as not a zero sum game? To see the other’s view from behind his eye balls?

To be able to see that in spite of the fact that the other is winning, you are winning too…

The capacity I call “bilocation”. The capacity to be able to move your eyes anywhere to see how life or the situation looks from there.

I am using that capacity in the driftwood distinction…
And that is the same capacity that allows people to have intimate conversations, to persuade another, to sell anything… and make the buyer feel well served.

It requires a lot of practicing to stay on.

But even if it opens only halfway, you start to be a winner in most interactions… no kidding.