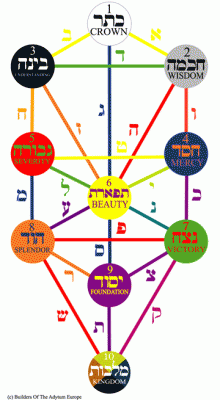 I just had a breakthrough…

I have been teaching you how to raise your consciousness, your level of consciousness, by allowing something or someone guide you to look at things beyond where you always look, and differently than you have always looked.

I consider myself always a student as well… so I have been listening to myself, and following my own teaching.

I attended a webinar a week ago by a business guru. He suggested that if I can show people a simple diagram of how I take them from where they are to where they want to be, they will be hooked on me… they will want what I have to offer. I had never thought that before…

I was formulating my diagram…

I felt like giving up, but I didn’t. Grit my teeth and stayed engaged.

I sat in my favorite chair, closed eyed, thinking of nothing much, I allowed consciousness to look. Consciousness knew what the question was…

I did some google searches. I looked what pages people are visiting now.

And then I saw it: I have been using the wrong words: people want to raise their level of consciousness, not their vibration. 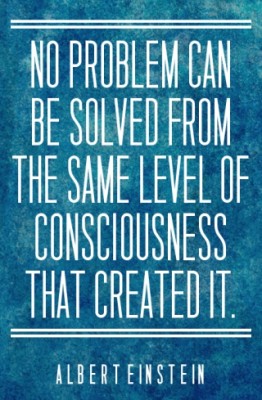 The 67 step method to raise your consciousness

And this is why it was such a brilliant stroke of luck, that I chose to use the 67 steps videos as the structure of the work I do: raising your level of consciousness.

Because all the 67 videos are going to be seen by you on your current level of consciousness, and you’ll look for answers, solutions on that same level… fixing.

Then I can ask you to tweak… that is a technical term for moving out of that fixed position of looking… and voila, your level of consciousness is starting to rise.

A very gentle method, but fool-proof. If you do it, you’ll raise your level of consciousness.

It is so gentle, that it is barely perceptible by you… very gradual. And then, from that higher level of consciousness, you’ll see something so stunning… that you’ll get excited.

Here is an example, my own.

I’ve always heard that excitement and fear have the same physiological “symptoms”… but this is actually the first time I am feeling it.

Not pleasant… Feeling incoherent… arms hurt, hard to breathe because of pain in whole chest area… have to check if it is an impending heart attack… the left side hurts.

Why would I be excited? After all, being on my level of consciousness, very few things, if any, cause this harsh symptoms.

And yet… I have been in the business of raising your level of consciousness, but because my site’s name is yourvibration.com, I am calling consciousness vibration.

I have been grieving, for years, that people are not searching for raising their vibration, and the ones that do, are airy fairy, not the kind of people who would like to work with me.

And when, today, I realized, that I call vibration what others call consciousness… I got excited and very scared… I can’t tell which…

It’s the weirdest thing that the map I publish, the map of consciousness… is called exactly that… But, like in many things, you are always the last person to see…

This is one of the main reasons to have a mentor or a coach… So they can tell you what they see, so you can, finally see what you have seen, but never realized that you saw it.

Consciousness saw it, not the conscious MIND… so it was ignored, considered as important as furniture… lol. not funny.

Let me summarize this:

But consciousness can be narrowed, and starved by your behavior. If you live a life impoverished, dead, fear-based, greed based, survival based, then you will starve your consciousness of information.

Now, here is the second part: your level of consciousness: the degree that you allow consciousness to guide you.

We could say, that your level of consciousness is the degree to which you live by what you know.

Ground bound, mind based, fear based… are the signs of low level of consciousness, of not trusting your highest “organ” that knows a lot more than you know you know. 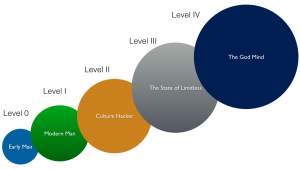 For now I am going to use Vishen Lakhiani’s illustration, even though it is inaccurate… but still demonstrates something that you might be able to grok.

For one: it is more gradual than the stages he uses. I’ll just redo it to how I see it, how I see it in my students… and replace this image with mine…

Most people I know want to get to the “culture hacker” level, where they can live the good life. But no matter what is your goal with your consciousness, the path is much simpler and easier than what Vishen Lakhiani teaches: you need to look at a lot of things with an ever expanding level of allowing consciousness to see.

No force will work, although the exercise to activate the Big Picture capacity is forceful in the beginning, because you need to train some muscles in the eyes.

I have found that the moment people consider their eyes as something to train, they start flying… they start rising rapidly.

The eye based capacities come bundled with another capacity, that without the eye movement will never turn on, or stay on.

Big picture comes with humility, and seeing the consequences of your actions, The Sight, comes with allowing.

Complaining that you have to buy something? That is what I do: I support transformation with energies… that is why what I do is effective, and what other people do isn’t. It’s that simple.