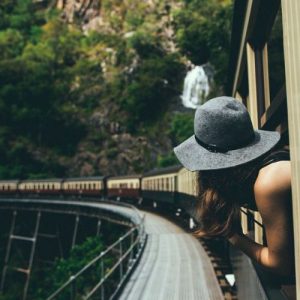 Life is like being in a train: you can look out on the left side, the right side, the back, the front… but it won’t change that you are on a train that will arrive to its destination, no matter where you look.

Most of us live this way most of the time.

Fulfilling? No. Enjoyable? It depends…

Ultimately we are plagued by a nagging sense that we are out of control, that no matter what we do won’t change anything. Some of us feel doomed. Some of us fight it tooth and nail… with bloody broken teeth and broken nails to prove it.
Download the pdf version of this article at the end of the article


What is missing for life to be fulfilling?

Some would say: raise your vibration, stupid!

What no one thinks is that the only thing that would matter with regards to your “train” life has to happen outside of the train.

What? you say. You heard it right. You have to get off the train and change where it is going.

And if you are really astute, you already know that you will have to do it quite a few times, to make sure you adjust the rails… 1

Hah, I said it, you need to get off the train and adjust the rails.

Now, even though the image of this courageous act is really amazing… in a movie, that you are watching, you have no idea how to do that.

More importantly, you have no idea what to choose as a different direction.

OK, here I need to issue a warning: unless you have some intangible capacities, this thing, this method won’t work for you.

Meaning: you’ll end up where you are headed.

What capacities do you need?

If you don’t have these capacities, all is not lost: you can have them opened, when you are ready for them.

OK: here is the big picture of the levels that you have to go through:

The actions leading up to and during the third level is where you’ll need the new capacities.

Now, let me address some questions that will come up, if you’re considering this journey:

One important caveat: you need to be willing to have been wrong. About everything.

If you blame anything or anyone for your life, the pull to keep on making them wrong for how your life is, for how you turned out, will make it impossible to move from the first level.

How do you do that? Give up making something or someone responsible for your life?

I am not an expert at that, I am sorry. But I am sure hundreds or even thousands claim they can do that. Try one of those offers.

Ultimately it boils down to this: can you choose happiness, riches, success, at the expense of having to be wrong? Wrong about whose or what’s fault it is that your life is the way your life is, that you are the way you are…

MOST people will choose to be right. Actually, the genes choose, but it’s neither here or there… you are the one who’ll continue the miserable trip in the miserable train that is heading where it’s always headed.

The destination is some version of “not worth a damn”. Not now, not ever. A pitiful trade for a little passing feeling of having been wrong.

2 thoughts on “Life is a lot like traveling by train…”