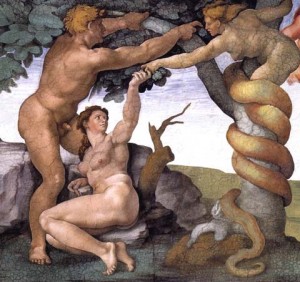 The Universe, as we call it, (all existence, all-of-it, are other possible names for it) is an incredible harmonious flow, from the tiniest part to the largest part, all flowing, all moving, ever changing.

Originally this included the species we call humans. Until something went wrong, and instead of consciousness, humans started demonstrating self-consciousness.

My story is, my interpretation of the biblical story of the Original Sin, sounds slightly different from the current Christian, or even Jewish interpretation.

The question that no one has debated until now, I think, is:

What did the serpent say to Eve?

Was it really about some apple, some tree?

Those questions created something new, self-consciousness, and started to kill self-awareness, and even dim consciousness.

Before that event life was easy and uncomplicated, life was to live, life was to rejoice, to create, to move with the flow.

From that point on life was about rules. Life was about fitting in, being well thought of, being smarter than another, competition, killing, stealing, dominating, tormenting, owning, gaining power over, who has the biggest “you know what”.

This is the reality we live in.

My life in and out of the flow

Let me show you, through my own life, how this may play out in the life of an individual:

I was born prematurely. I was born with the body weight of two pounds. There were no incubators in 1947, or maybe just not in the Jewish hospital where I was born in post-war Hungary. I wasn’t meant to make it, but I did. I hung in there. I was fed formula, and cow’s milk, and I became a colicky, sickly little girl, who threw up, had diarrhea, and continuous stomach ache, debilitating migraines, insomnia, double vision, dyslexia, and other stuff.

I liked to eat what I wanted, not what was served, so I got beaten every day. I was skinny as rail, but nothing bothered me. I was an explorer, climbed trees, distance peed with the boys, stole toys from kindergarten, sucked on lemons, ate lots of unripe fruits. The tarter the better.

I was infamous, a rebel, a rule-breaker. I didn’t fit in and it was mighty fine with me.

I was top of my class, even though I could not see the blackboard: I was very near-sighted, but because my parents “knew” I was stupid, they didn’t have my eyes checked until I was nine.

I continued to be like this, uncontrollable, for a long time. Beaten, despised, and top of my class. I competed in swimming, ping-pong, the uneven bars. In the mornings I ran to the swimming pool at 5:30, down the cobblestone street knowing that a false step would surely break my neck. I never took a false step, and I never slowed down.

After I graduated in 1971 from university, a new wave of “not-fitting-in” came: I even survived that.

I was an architect, misplaced, but unbroken. Until I did a few-year stint with structural engineering. That broke me.

I was in the flow, I got the knowledge from someplace other than my head. My head was empty, and I loved it.

But then trouble began to put its foot in my life’s door: I was hired to be the structural engineer of a very special museum extension: the architect specifically asked for me, and they hired me away from my previous firm. He asked for me because I was really an architect with an intuitive knowledge of structures.

I had a team of 10 people and I worked 14 hours a day. The firm had to maintain a team of three to check on my measurements: I didn’t bother to do any calculations, even though that is what structural engineers are supposed to do, calculations.

Although the measurements were OK, I was hated. They were harassing me. I was an oddity, I made them look bad. What took me a glance took them a computer and a few hours of calculations to get to the numbers.

Slowly I started to get self-conscious. They threatened to fire me if I didn’t shape up. I started to do calculations… and I destroyed my connection to my right-brain, my creativity, my life force.

I started to be lost, aimless, depressed, unmotivated, and greedy.

Not until I started to follow my calling again, socially unacceptable as it was, that I started to return to my connection and to my sanity.

How to restore the flow

And now, after having returned to being off the beaten path, I am attempting to assist people to re-connect to their harmonious-with-the-Universe nature, to step out of the mind and step into their inner sanctum, into their CORE, to use the tools human beings came with, the attention, the will, the soul, and the ego… instead of just the words and the resulting emotional sh*t-storm people live in.

It is an uphill struggle, if you ask me, but it is not impossible.

Some of my students connect for a moment or two, get glimpses of their hidden aspects, and those moments, those glimpses can grow into controllable, long stretches of harmony, and flow. Brilliance at will, if you really want to know the truth.

Others, the engineering type, mostly men, haven’t been able to get out of the mind,  out of the self-consciousness. Yet.

They live in the past, locked into that, and locked out of the bliss, joy, exhilaration of the moment, and brilliance that comes from the beyond when you are in the flow.

What’s next? I am not giving up. I am an innovator, and I trust that the jail-break is imminent and I’ll be given the tools.

Maybe the extreme weather, the diseases, the widespread misery are simply the symptoms of being out of sync, out of the flow… what do you think?

1 thought on “How Humanity Fell Out Of Harmony With The Universe? The Re-Interpretation of the Original Sin”