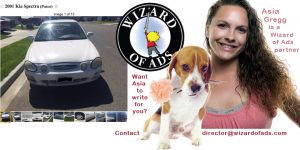 I clipped this from Monday Morning Memo… because it is so fabulous… A fast way to enlightenment.

Because you get your wisdom where you find it!

First things first: If you can’t imagine yourself tearing up the streets in this whip without feeling embarrassed, then get out. Your ancestral bloodline is anemic, and you are dismissed. The Spectra does not tolerate weakness.

As for the rest of you — put your helmets on, because I’ve got a metaphysical bomb to drop.

I’ve discovered the secret to happiness.


No it’s not religion, drugs, or donating to charity.

The Spectra is not a car, it is a key that unlocks the door to Enlightenment.

Buddhist monks take vows of celibacy and meditate on top of mountains for their entire lives just to achieve Enlightenment. If only they knew that The Spectra can cut them to the front of that spiritual waiting line faster than a handicapped person at Disneyworld.

It’s a legitimate-sounding fact that the 2001 Kia Spectra produced one of the most profound philosophical quotes of our time, back in the year two-thousand-and-fourteen A.D., by contemporary theologian T-Swift: “Haters gonna hate.”

Those brave enough to publicly grip the steering wheel of The Spectra are immediately illuminated with a divine light of realization: whether rich or poor; beautiful or ugly; intelligent or Republican; someone is going to hate on you, no matter who you are or what you do.

So screw trying to impress those people. Save some money and drive a 2001 Kia Spectra. Automatic. Like a boss. Because haters gonna hate anyway.

And that, my friends, is the secret to happiness.

At this point you might think: You’ve just told me the secret, why buy the car?

Well Neo, there’s a difference between knowing the path and walking the path.

To drive The Spectra is to walk the path.

This sheet metal muse inspires its owner with a baseless sense of stratospheric self-esteem. The amount of confidence it takes to drive it is equal to the balls it must’ve took the first guy to ever bungee jump.

The Spectra also comes with its own Invisibility cloak. It’s an unassuming blender. This car is so far under the police radar it’s like a submarine sneaking across enemy lines. Just like that time Mexico invaded Canada, nobody sees it coming.

The Spectra doesn’t run on horsepower; it runs on donkey power. Know who else relied on donkey power for transportation? The mother of Jesus, that’s who.

Like Eminem in 8 Mile; David versus Goliath; the Spartans at Thermopylae; and most likely your checking account balance, The Spectra has nothing to lose.

And only those with nothing to lose can afford to go after their dreams holding nothing back.

So, what are your dreams? Have they been eluding you? Then sneak up on ’em in a 2001 Kia Spectra. They’ll never see ya comin’.

The best part for me, that is hardest to get in my experience, is this: Talking about, knowing about something isn’t anything that matters.

To drive The Spectra is to walk the path.

Most of you need to learn that…