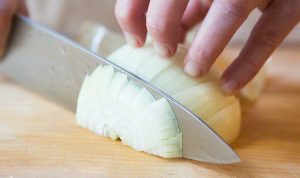 I mostly hated it, especially when he is elaborating on his non-cult cult rules… ugh. Just as unnatural as the diet cults he criticizes.

What is most striking in all the diet-cults, to me, is their ignorance of the fact that food, unless it is prepared in a tasty, mouth-watering way, isn’t nourishing for most people.

Food prepared and offered pleasing to the mind is not nourishing, not edible for the body.

I had two health calls in the past two days, and both people ate in a cultish way. In their mind they ate for health. What they shared were these:

I came away from both calls with the same feeling: unless I teach them how to cook delicious meals with the few ingredients that agree with them, they will not get better.

And even more important: they will not get happier.

The way some cultures cook is tasteless… the dishes are boiled, thrown together. I have traveled enough to see that.

Other cultures, like Japanese, are painstakingly meticulous in preparing their meals… I haven’t been in Japan, I have only read books. I saw that in Marikami’s books, I have seen that in Barry Eisler’s book. I can’t be sure, but I’ll risk that maybe this is the secret to their longevity?

What happens if and when the food is not tasty enough?

The same thing that is happening in France right now: they started to cook and eat like Americans, and they are getting fat… and soon we’ll hear of heart attacks, and cancers, and diabetes in a country where the numbers of these diseases, while they cooked traditionally, weren’t high.

Same in Hungary… I remember when it all turned… because I am old enough. 🙁

When my mother started to buy oil instead of cooking with chicken and goose fat. Someone suggested that oil was healthier…

And everything went downhill from there: because oils are not only NOT healthier, they are actually deadly for most people. But for the purposes of this article, they have one other contribution to the worsening health: they make the best dishes taste like crap… because the spices don’t dissolve in oil. The spices don’t bring out the fragrance of the spices.

So what did the country that started it all? They created those horrid sauces, those horrid ketchup, those horrid concentrated tragedies of explosive taste… because what they put it on tastes bad or bland.

You need to salivate before you eat for the food to become nourishment.

As a result, in the stomach you’ll have either acidic conditions, when what’s coming is protein, or alkaline, when what is coming is starchy.

If you don’t salivate, if you don’t chew, and if you eat the standard American fare, your stomach doesn’t know… and as a result it will

Indigestion and the bad breath is what it gives you on the short term, but that is just the tip of the iceberg… You continue to crave… sex, war, hating, speed, alcohol, smoke… whatever your favorite cravings do… while your body neatly stores the toxins in fat… because it can’t get rid of it. It comes fast and furious… faster than the liver can handle the onslaught of toxins.

Surprisingly it is not difficult to make food tasty… it is all in the basic moves that can learn in a few lessons.

I remember when I was 18, I was a maid in a British household… I cooked a few Hungarian staple dishes because they asked me to… I observed how they cooked… And I tasted the resulting food… ugh.

Nature gave us garlic and onions, in most cultures, to make food flavorful. They make any savory dish delicious.

Countries that cook well know that. 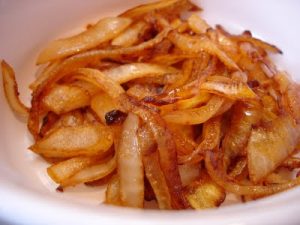 If you learn just one thing: how to saute onions for your dish, you’ll immediately increase the enjoyment value of your dish, and salivate, and slim down, and get your nutrients from your food.

There are more cooking moves, but not many. I have a book on cooking techniques from Hungary… where people started to get heart disease when they started to cook with oil… 1

I’ll try to find an online course to teach you, or if I must, I’ll teach you myself. It is that important.

As long as you eat with your mind, you won’t be well. Guaranteed.

Consider this: if you HAVE TO put any sauce at the table, including Ketchup, mustard, mint sauce, cranberry sauce, any spice mix, any condiment on your food: then it is NOT well made.

Your Chinese, your bbq, your chips/French fries, your hamburger, your sandwiches… if it is not good without mayonnaise, or ketchup, or even oil and vinegar… then it is not tasty…

Your pizza sauce, your tomato sauce, your Indian simmering sauce… all designed to cover up that the food is bad for you or that it is tasteless.

Learn to cook. Just the basics… it is easy… albeit it is precise… Cooking is chemistry. More like bomb making than you’d think. The Anna Karenina principle 2 applies here too: all good food is made with methods that are alike: every bad or tasteless dish is made with bad methods in its own way.

I say above to use the good food preparation technique with the foods that are good for you, or at least are not harmful for you.

But how do you know what foods are good for you? You, personally… Not your brother, not your friend, but YOU.

I can muscle test your food list for you. I am good at it, and the results speak for themselves.

I managed to bring my health number up to 70%… it used to be 3-4% by muscle testing the foods that are good for me, and even eating little of what is neutral for me.

I can do the same thing for you.

Let me muscle test the foods that you can eat
.
.
.

5 thoughts on “Diet cults vs. HOW to prepare your food that your DNA and your body intends for you to eat”