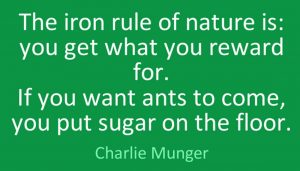 “The iron rule of nature is: you get what you reward for. If you want ants to come, you put sugar on the floor.”
~ Charles T. Munger

You could look at it straight… and see nothing.

You look at it in reverse, and a whole world opens up.


This is true to all of Charlie Munger’s quotes… they show their true colors, their true teachings in reverse.

So. let’s see… Look at what you get a lot of… I used to get a lot of pain. A lot of stomach issues. A lot of headaches. Too little money. Lots of disruptions. Lots of anger and frustration…

“If something is too hard, we move on to something else. What could be simpler than that?”
~ Charles T. Munger, Charlie Munger: The Complete Investor

We are taught not to quit. Never to quit. Blah Blah Blah

Let’s look at this quote. Consider for a moment that the “we” in the quote is the two richest men, self-made men, in the world live by it.

When something is too hard, they move on to something else.

Now, let us look at some of you: you picked something hard, too hard, too unlikely, too unattainable to go for.

It is like the uncatchable ball in my 1991 story… The instructor throws the ball behind herself, away from the “intended recipient” in this exercise.

The “recipient” flails his arms, jumps, maybe even yells, but really doesn’t go for the ball. The ball cannot be caught.

Now, why would this be true for you? and why on earth would you set a goal like that?

In the “Born Liars” book, excellent book, by the way, I learned that we dupe ourselves too.

It is often beneficial… like when we believe in a cure… for example.

But when it is your whole life that you are toying with, lying about, what is that about?

The workability “rule” is to put your energies to an area where you have enough talent to be in the top 5% of all the people who use that talent.

I have quit pursuing those aims. No regrets.

But you will set your aim at something that you have, at best, enough talent to be “also ran”…

While, I must confess, you have plenty of talents in the less populated areas of the gray areas… what Tai calls the “edge effect”, neither the forest, nor the meadow…

But you are reluctant to go there… you keep pursuing the uncatchable ball, making noise, flailing… like a clown.

My hunch is that being at the place where you can produce top 5% results in not comfortable. I should know.

It is NOT comfortable.

You are now nudged both from inside and outside… and now you’ll know what you are made of.

If your soul correction is too hellbent to make you lie… you’ll keep spending the rest of your life failing at the impossible to catch ball… and you’ll have an excuse: it was uncatchable. 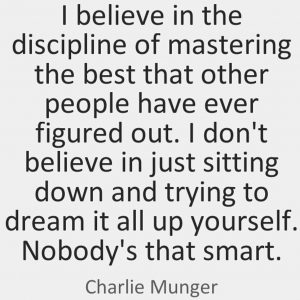 “I believe in the discipline of mastering the best that other people have ever figured out. I don’t believe in just sitting down and trying to dream it all up yourself. Nobody’s that smart.”
~ Charles T. Munger, Charlie Munger: The Complete Investor

Next time you hear someone say: the truth is within… run and don’t look back.

Whatever didn’t get in you, can’t come out.

I should know: I ask Source, whatever Source is, and once I get an answer, I have come to the habit of asking: “Do you know the answer?”

Most people are “garbage in, garbage out”… especially the vocal ones… the ones that try to teach you.
————– 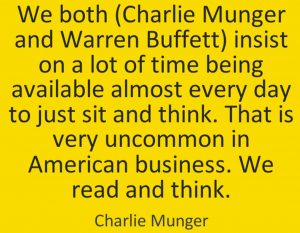 “We both (Charlie Munger and Warren Buffett) insist on a lot of time being available almost every day to just sit and think. That is very uncommon in American business. We read and think.”
~ Charles T. Munger

What he doesn’t say, is that what goes in gets pondered over almost instantly. I do it. I read and I ponder. I allow the new knowledge to find the related knowledge, so the new Sequoia tree can fold its roots into the existing root system.

Just because an idea sounds good, it may not be true, or may be a total distraction, a Dark Side attempt to pull you off your path…

The more you fit this pattern, the likelihood that you are also pretending to want to catch an uncatchable ball…

This is a lot like your risk factor for a heart attack… the more patterns you fit, the greater your personal risk. 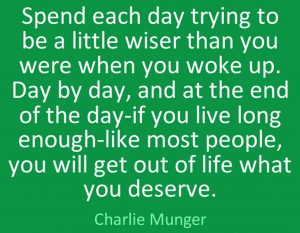 “Spend each day trying to be a little wiser than you were when you woke up. Day by day, and at the end of the day-if you live long enough-like most people, you will get out of life what you deserve.”
~ Charles T. Munger, Poor Charlie’s Almanack: The Wit and Wisdom of Charles T. Munger

If you are nodding, you are probably lying.

The ess, the evolutionary stable strategy, is to remain the same, and to either try to maintain, or just live… taking the level you are at, for granted.

Complacency, self-delusion, listening to the mind that says: “you can rest now”… or “it’s now handled” is everywhere, and I simply don’t know anyone who follows that “trying to be a little wiser…” advice.

Maybe the billionaires who said it.

I always thought that it was a jinx, but I am coming to see that the moment you stop growing, you are in fact dying… And in my case, it applies to every area of my life…