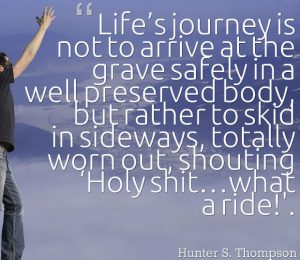 Not surprisingly, I hope, the difference between homo sapiens (thinking man) and Human Being is this elusive “thing”: beingness.

Beingness does not respond to words.

It is a whole different ball of wax. The secret is on the seed level… whatever that means, right? lol

You can give a lot to charity, but not be charitable. You can smile a lot, but not be happy. You can fake it but you will not make it… there is ONE of the many misguiding, misleading slogans.

You can observe it, and yet know nothing about it.

When a little boy goes to school: something happens inside. He is a big boy now. That is a beingness.

All give the illusory impression that the change outside created the change on the inside.

So people (ignorant? mislead?), gurus, teach you to do just that: change the outside.

And it is as effective, or ineffective, as pinning cherries on an apple tree: the tree will still bring apples… the beingness is “apple tree”. Have you seen a skinny fat person before? Nothing changed inside: the beingness: “I am a fat person” is the root of their existence.

Now, why would you want to attain to this elusive, intangible capacity to BE something? Why is this such a big deal that you should really want to have it?

Because the way you are is not able to give you what you want: peace, love, happiness, fulfillment. For most of you: you aren’t able to make more money, so you can feel good about your life. For many of you: your body is not your friend, not your ally. For some of you: your relationships suck, and you have no freedom.

And if you want to be honest with yourself: you have no idea why.

And no one has been able to help you change anything. Actually, all that help has lead to you feeling worse about yourself.

What is the issue?

There are two issues as I see it:

Now, given that the assignment I got from Source, (whatever the heck Source is, sorry Source… lol. xoxo) the assignment has been to experiment with developing some way that would take you to the place where beingness is in your ability to create.

Why does Source need me? I usually say: because Source doesn’t have a thumb… but that doesn’t help here.

Because the inner workings of a human have gone the wrong way, have gone counter to the Original Design, the design that is clearly readable to those that can read, it’s hardcoded in your DNA.

You are supposed to be able to create any of the 160 beingness states that are dormant in your DNA… the same exact ones I call “spiritual capacities”.

Here is a weird example: Seeing the Big Picture… that is a beingness.

Not a doingness, although there is a behavioral aspect to this beingness: people in this state of being are widening their cone of vision, looking at the interaction of many things, see fitting pieces where most people see nothing, because they never looked there.

For the past almost two weeks I have been doing a private experiment.

According to my behavior (Kolbe test) I am a Quickstart… meaning I have the courage and the inclination to start doing things without a plan. Instinctually… 3 But…

And this is what the experiment was about, this “but”

You can be a Quickstart (behavior, not a being!)

The experiment was to feel the pull to act fast (quick pleasure) but not get stuck there… bring Big Picture beingness to the jumping.

I will never become a planning person. I am bad at it, and it is no fun.

Jumping is fun, brings with it quick elation… Whew, what a ride! lol

Seeing the big picture, the beingness, bridges between a pleasure/relief bringing behavior (jumping) and success with a project.

The new beingness I have declared and now am learning to master is this: I figure it out as I go.

This is the name of the beingness: Quickstart with Seeing The Big Picture, “I figure it out as I go”

Which is to say: the beingness of moving, growing, blossoming needs to start with the Seeing Big Picture capacity.

Some people, when you point out to them a solution to their problem, that is outside of their cone of vision, will move their whole head, and if they can see what you can see, they will take an action.

But now the connection is severed… because they can’t have the two seemingly disparate areas of life in the same picture… One of my students, an artist, is in this place: but she doesn’t feel that connection: the connection between creating art and selling art… for her it is still separate and she doesn’t feel the joy of doing the right thing. Now she is zooming in on marketing… and have abandoned her main source of joy: her art.

Another student gets it and then doesn’t get it. The reality he doesn’t want, doesn’t like, wants to push away doesn’t quite change… even though he accepted my suggestion to look deeper. Why? Because the two pictures don’t combine in him to one big picture… they are separate.

You can “do” seeing the Big Picture… but each time you stop seeing it, you go back into despair, indecisiveness, or do the wrong actions.

Now, do you just go there?

Unfortunately you can’t. You need capacities and you need to need them. Trust, self-trust, and not surprisingly the “big picture” capacity. You also need to be able to recognize what you see… which needs you to have an astuteness level, an intellectual level that allows you to do that.

They say the average IQ in the United States is 100.

In the past years, the average IQ, the number, remained 100, but what it means, in comparison with years earlier, that people who rate 100 today would have rated 80 ten years ago. Meaning: the average intelligence of people living in the United States has dropped to 80…

You had to, consciously, turn on the television, read the newspaper, or pick up the phone to get distracted.

Today, it is on autopilot.

Ten years ago you had what you had… and more or less were happy with it. Your body, your skin, your relationships where what they were…

But how intelligent, how sharp can one be when one is in a trap?

If you said: not very… you were right.

You see, the world is going further and further away from The Original Design.

I am having a harder and harder time to bring people back in my workshops.

And yet, that is my assignment. “Straight from Source”.

And no plan will be useful.

One of the reasons is this: each plan is to create a solution to a problem on the same level of consciousness that created the problem.

Einstein said it, and I concur (To concur is to agree or approve of something. If someone says something you agree with, you can say “I concur!” 4

So I ran my last workshop without any preparation. Flying without a net. Figuring it out as I went.

One of my most important jobs in the 67 step coaching is to push people so they get off the fence… and put themselves in the position of figuring it out as they go.

And help them turn on the big picture capacity… when I see that they are really needing it.

Flying without a net… lol.