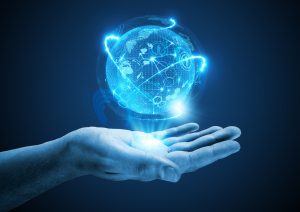 Does it matter whether this Universe with you in it is a hologram or not?

Great question, isn’t it? I am very proud of myself for asking it.

But if I get an answer, and I go “yes”, unless I find out what exactly I asked that was answered, I am as dumb and assuming as I was before I asked the question.

So, what way can it matter whether this/you are a hologram or not?

Had I asked you a different question: does it matter whether there is a god or not, you would have, already ready, your opinion.

These two are pretty much the same question.

When this morning I was pondering the Original Design… I asked a question that I have never thought to ask: do “they” whoever, whatever “they” are, who are on the other side of the two dimensional hologram disk…

The question, surprisingly creates a new context for life. For history. 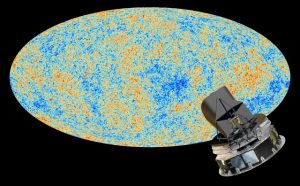 And all that DNA stuff seems to be -empirically- true. If it weren’t, then subtle inner changes, like being brilliant at beingness, etc. would show up in the DNA… but with the current tools scientists have, it isn’t showing up.

And yet, it is inheritable. 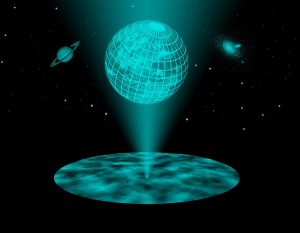 If it is inheritable, but not part of every man’s DNA… then it would be detectable… but it isn’t.

Which makes me come to a conclusion: there IS an Original Design, a design that did not evolve, simply was… it remained a design.


Which, against my best judgment, my education, talks against strict evolutionary process when it comes to Humans.

I am feeling naked. Exposed. Silly…

Now, if this is NOT a hologram, then what is it?

Here is the article that triggered this article 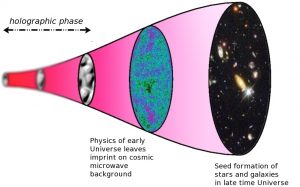 A sketch of the timeline of the holographic Universe. Time runs from left to right. The far left denotes the holographic phase and the image is blurry because space and time are not yet well defined. At the end of this phase (denoted by the black fluctuating ellipse) the Universe enters a geometric phase, which can now be described by Einstein’s equations. The cosmic microwave background was emitted about 375,000 years later. Patterns imprinted in it carry information about the very early Universe and seed the development of structures of stars and galaxies in the late time Universe (far right). Credit: Paul McFadden Source: 1

A UK, Canadian and Italian study has provided what researchers believe is the first observational evidence that our universe could be a vast and complex hologram.

A UK, Canadian and Italian study has provided what researchers believe is the first observational evidence that our universe could be a vast and complex hologram.

A holographic universe, an idea first suggested in the 1990s, is one where all the information that makes up our 3-D ‘reality’ (plus time) is contained in a 2-D surface on its boundaries.

Professor Kostas Skenderis of Mathematical Sciences at the University of Southampton explains: “Imagine that everything you see, feel and hear in three dimensions (and your perception of time) in fact emanates from a flat two-dimensional field. The idea is similar to that of ordinary holograms where a three-dimensional image is encoded in a two-dimensional surface, such as in the hologram on a credit card. However, this time, the entire universe is encoded.”

Although not an example with holographic properties, it could be thought of as rather like watching a 3-D film in a cinema. We see the pictures as having height, width and crucially, depth—when in fact it all originates from a flat 2-D screen. The difference, in our 3-D universe, is that we can touch objects and the ‘projection’ is ‘real’ from our perspective.

In recent decades, advances in telescopes and sensing equipment have allowed scientists to detect a vast amount of data hidden in the ‘white noise’ or microwaves (partly responsible for the random black and white dots you see on an un-tuned TV) left over from the moment the universe was created. Using this information, the team were able to make complex comparisons between networks of features in the data and quantum field theory. They found that some of the simplest quantum field theories could explain nearly all cosmological observations of the early universe.

Professor Skenderis comments: “Holography is a huge leap forward in the way we think about the structure and creation of the universe. Einstein’s theory of general relativity explains almost everything large scale in the universe very well, but starts to unravel when examining its origins and mechanisms at quantum level. Scientists have been working for decades to combine Einstein’s theory of gravity and quantum theory. Some believe the concept of a holographic universe has the potential to reconcile the two. I hope our research takes us another step towards this.”

The scientists now hope their study will open the door to further our understanding of the early universe and explain how space and time emerged.