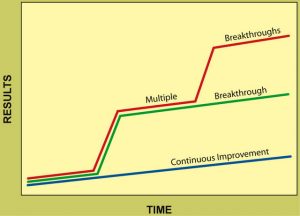 Most breakthroughs go by as if they didn’t happen. Why? Because a breakthrough not understood doesn’t create a new level of operating for the person. They are sometimes viewed as magic, a miracle… divine interference, but not something that was caused by the person.

A breakthrough fully understood creates a whole new level of performance, whether it was an organization, a science, or a person that had it.

With that said, this is the purpose of this article: to create for her a new level of operation, a new level of performance, through understanding what happened.

She had been paralyzed for months. She wasn’t able to articulate the reason, she just wasn’t doing her work, and her numbers were plummeting. Vibration, number of capacities, etc.

Here is what she said:

I have been putting too much pressure on myself to act, to make decisions, to generate some movement, when I don’t know in what direction. I was making the “ball uncatchable”. Your articles in the last few days have really nudged me forward. I don’t think it was my conscious intention to just stop, but I fell off into a twilight zone, and before I knew it, days had passed. I spent a lot of time looking at things.

I am now doing “naturally” those things I was pressuring myself about. The pressure was distracting, and the relief is great. I am now reading regularly and building. The building is necessary. I have to accept that maybe that’s just where I am right now.

I didn’t like the soup article so much, because I saw myself. I actually stopped reading partway though and shut it down. Ugh. I couldn’t take any more, but I went back and finished it. Great article. In fact, there were a couple of articles I couldn’t get through the first time; too painful.

I am in the middle of the Feelings book, working my way through. Not an easy book, but I can follow. Taking it slow, taking it in. I am trying to do as you suggested, to read for “getting”. Slow, steady, getting.

Now, one of the areas of contention, a disagreement between students and myself is around the software based needs.

Remember, there are three software based needs.

These are a hierarchy: without fulfilling the need to meet others’ expectation, the idea that you have expectations of yourself doesn’t even come up, other than as a lie.

And without fulfilling, meeting our own expectations, we can’t even think of self-realization, other than a pretense: to make ourselves look and sound holier than we are.

Now, what does this have to do with the student and her breakthrough?

Her distaste reading my articles were her own distaste for herself.

That places her squarely on the level of the second software based need: meaning, she has a self, she has expectations of herself… so she can be disgusted, bothered by, disappointed in herself.

When someone who is on the level of needing to meet others’ expectations, when they get permission to let go of pressure, they immediately take advantage of it, and slack off.

Like a child, like a dog, showing that they have NO expectations of themselves… they are just trying to keep others at bay… obeying, but not generating anything for their own satisfaction, because there is no self. Yet.

Now, let’s return to the student with the breakthrough:

There were two breakthroughs: one is probably invisible, but while she was pressured, felt pressured to do whatever she felt she needed to do: that pressure came from the need to meet others’ expectation of her. Namely, probably, her children, her boss, and myself.

So the second, very visible breakthrough happened: she started to do the things she had been unable to do because of the perceived outer pressure.

If you, like her, were born again… this time as a person, you are on your way to become a human being.

Will it be any easier?

No. The rest of the journey will be without major upheavals, I think. It is work, but it is self-directed.

I am not saying she won’t need guidance, but having a Self, guidance will be guidance, not pressure.