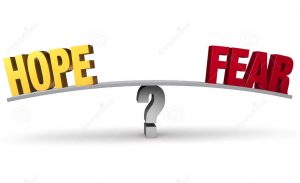 In my quest to find like-minded people, who want to better humanity, I am watching videos, and am exposed the feelings of the speaker, commentator, or whoever is in the video.

What prompted this article is a bout of weeping… for no reason.

I am sitting here examining the context inside which this happened, and I Have had no reason to be sad, to weep.

So I ask, somewhat late, this usual question: is this mine? The answer is NO. Does this belong to one of my students? no. one of my readers? no. to the speaker on the video? yes.

Now, this was today. But whenever I watch a sales video… or maybe even read a sales email…

I get the feeling of the person who wrote it.

Most often: hope+fear: A perfect prescription for misery. 1

Hope is bad for you. Why? because hope doesn’t let you fully own that you need to do the best you can, and the rest is not up to you. And the fear is a natural result of not being willing to own that whatever will happen is out of your hand.

Your job is to be honorable when you get the results, which are a feedback to what you did.

Cause and effect. Physical law…

Analyze the effect, make tweaks, and do it again. That is what someone who is honorable does.

Resigning, throwing your hands up, complaining, giving up… that is what you do. Why? Because being honorable was never taught to you.

A good chess player makes their move, sees the counter move of his opponent, looks deep, and makes another move.

And so it goes till the end of the game.

The only difference between a chess game and life is this: Life isn’t intelligent in this regard: it isn’t out to get you… a chess opponent is.

I hope the reason you are here is to learn to play the game of life better. To be prepared, ready, and play well.

My job is to point out all the ways you are not prepared, mislead, misbehaving, and therefore losing.

Winning isn’t the point, the point is playing.

Most people have given up so long ago, they don’t even know that they could be playing.

You were born to live.

Not a fixed kind of life, not to be happy, not to help people.

No. You were born to live. And if that is the purpose of life, wouldn’t it be intelligent to learn to live? Like a person?

Instead of being a puppet, or a rudderless ship, or a leaf blown about by the wind?

There are, as Tolstoy said, lots of ways to not live… and only one way to live…

OK, here is an email I edited to match what I want it to say… I received it today from one of the only marketers I feel affinity for. He feels like a straight shooter, like me.

Are you afraid of failure?

My usual response is, “So what? Join the club. Everyone fails. It’s what you do with it that matters.”

But recently I heard the perfect quote for these situations.

“Success is 99% Failure.” That quote is a little confusing. Here’s another one from him which makes it more clear.

“Success represents the 1% of your work which results from the 99% that is called failure.”

Failure is a stepping stone to success. It’s a natural progression.

Instead of failure being something to be afraid of, it is to be embraced.

When you were a child and took your first steps, did you ever fall flat on your butt? I’ll bet you did…just like everyone else.

What about the first time you got on a bicycle? This is embarrassing, but I remember the first day I got my driver’s license.

I only had a license for a few hours and was out with my buddies.

I backed into a parked truck in a McDonald’s parking lot.

Luckily, my parents weren’t angry. In fact, my father burst out laughing when I told him.

My mother bragged to him that “I drove just like her” earlier that day.

Accidents didn’t become a trend although I did have one more during my teenager days.

If you pick up golf tomorrow, do you expect to play on the PGA tour next week?

Or join NBA the first time you hold a basketball in your hands?

No. In sports, it is clear, even to you, that you have to practice.

In science, it’s about a process of experimentation until a new discovery is made.

In business, it is about testing different approaches until you find the one customers love.

In advertising, it’s about optimizing each step of your campaign.

Every offer isn’t going to be a home run.

Every email isn’t going to produce a landslide of sales.

And playing it safe…doing what everyone else does…isn’t the route to innovation and improvement.

Often the greatest improvements are made when you try something from outside of your industry.

In investing, they talk about managing risk.

If you invest money in CDs, you have very little risk. But you also get almost no return. In fact, once you count inflation, you’re often getting negative returns.

Stocks, bonds, real estate, and commodities like gold all introduce additional risks. But there are also greater returns available here.

But where’s the greatest potential return for your investment?

I’ve never earned a return in any outside investment like I have in my own business.

But that also means you need to take some intelligent risks in your own business.

Join the Monthly Mentor Club…the club where winners hang out.

OK, he has a monthly mentor club… I have the 67 step coaching program. I only accept people I can see that I want to work with…

The best screening tool has been the Starting Point Measurements…

1. your vibration (1-1000)
2. your overall intelligence, emotional, intellectual, spiritual, body, relationship, etc.
3. the number of spiritual capacities you have
4. your soul correction (your machine) I need your date of birth for this https://www.yourvibration.com/sc is a depository of soul correction articles.
5. do you have attachments?
6. the level of your health (1-100)
7. the level of your cell hydration (1-100)
8. your relationship to feedback and instruction
9. The level of discomfort you are willing to allow without the urge and the habit of “fixing” it… dispersing, leaking, it. This is your TLB score…

I am contemplating adding another measure… #10: how comfortable you are living in the matrix, being a cog in the machine

The more comfortable you are, the less you’ll be willing to do my program…

Click on the payment button to send me a donation to get your starting point measurements. I’ll send you my answer in email…

Click to get your Starting Point Measurements Report
To get this information, I have to connect to you energetically… And I find out more about you than just the numbers… I connect to your soul… and I connect to your personal hell… That’s how I make my decision, on that basis. My experience of being you.