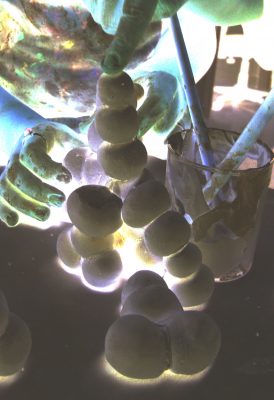 Words are tricky. You think you understand them, and you think that everyone hears the same meaning when they hear it. They don’t… maybe ever!

The main problem with the Tree of Knowledge: we learn our world through words, instead of experience.

And you end up delusional, making mistakes, and never happy.

This is the main reason for unhappiness. The words create an illusion of being reality… but they aren’t… and moreover the inner map of reality they create is vastly different from reality itself.

In the book I am reading, a physicians’ teacher instructs the learning doctors: “Don’t think, try” or to make diagnosis “based on what they saw rather than what they had been taught to expect.” He also said: “no facts, no theory”

This was in 1766… but nothing has changed in these centuries. Doctors still do the opposite, and so do you.

The culprit is not just going into your head thinking the answer is there, while you are missing facts, “no facts, no theory” but also that you are using your eyes wrong.

When I say eyes, I actually mean eyes-plus-attention.

There are two ways to look in life, using your eyes:

So you see that moving to the Tree of Life is mandatory if you want to have a good life.

Problems, almost always, are caused by your previous actions.

Let me repeat that: YOUR previous actions. Actions that were hasty, actions that were actions based on a narrow cone of vision, an agenda, an impulse, on a rule you created.

These actions took you to a dead end. A point where you are clear there is no winning on the path you have chosen.

It happens all the time, your case is not unique.

It’s important that you get that. Because unless you do, you’ll think you are on your own. Or that no one has thought of a solution… Or you’ll go in your head trying to find a way out there…

Going into your brain for a solution is a lot like staring at a hammer hoping that staring will make it do the hammering… without a nail. Stupid.

So where should you go?

Outside. Look at the whole construct you built with your previous steps.

If you keep your eyes fuzzy, and see the whole field in one glance, the previous error will show up. Then, gasp, you remove the faulty step, and look again. Look until you removed all the faulty steps that lead you to the dead end. Get back to the first faulty step.

As I said, faulty steps come from your narrow cone of vision, ignoring or just not seeing the game of life many steps ahead.

This, like chess, will need practice. Also, intellectually stronger people will get there faster, but everyone can get there… You screwed yourself up, you can unscrew yourself.

If you look with fuzzy eyes.

Cats are great teachers. They walk around with fuzzy eyes, seeing everything and seeing nothing in particular… Until they start stalking their pray: then the cone of vision becomes narrower…

You walk around with spotlight eyes/attention, and bump into everything and everyone.

Learn fuzzy eyes: your results, your blood pressure, your digestion, your mood will thank you for it.

In yesterday’s webinar we looked at your life through upsets.

Upsets indicate the specific way your life is bankrupt.

And following the methodology above, we started to peel back the layers. We were attempting to find the first wrong step… that started your life to go in the wrong direction, in the direction of a dead end, a dead life.

Why does it work? I don’t know. It does, and that is all that matters to me.

There was a step where you did the wrong thing, or didn’t do what would be the right thing.

For many people we are looking decades later… and yet. Tracking life back to the wrong step, determining the right step, will alter your life in the present, just like in the movie “Back to the Future…”

You change something relevant in the past and the future is a whole new situation.

Your upsets are like a string of pearls, originating from the first mistake.

Life has a way to present you with opportunities to right your original wrong… but the emotional upset covers it up.

In most cases the core issue, the wrong step, was you being a putz… a weakling, not standing up for yourself. The technical term for that is “undelivered communication.”

Often the undelivered communication was saying: “No, I am not going to do that.” or “No, you can’t have that” or “No, you haven’t redeemed yourself in my eyes.”

And second most frequent “mistake” or core issue is expectations. Expectations are the mother of disappointment.

If you were disappointed in your core incident, then your life is a string of disappointments.

Hundreds of incidents are on that string strung up. Really a whole lot!

I still haven’t quite figured out what was the mistake I made:

I expected to be treated as a person. I still do.

But given how selfish humans are, how only their self-interest matters to them, if I respond to being disregarded with despair, and tight lips, they won’t even notice that they are disregarding me, disvaluing my contribution, dissing me.

So one thing is owning that I have expectations, and that I am setting myself up for pain. The other is: communicate.

So what can I say? I could just simply say: “That hurts”

Most people when you tell them that what they did hurts, wake up and at least notice.

It is unconscious and unintended on their part. If you treat yourself as furniture, you encourage others to treat you like furniture.

I think I have been treating myself as furniture… hm. Big despair. Tears.

Owning it is the job. Saying: I did that, and no amount of justification will be enough to undo it. Only owning it.

Once I do, I can ask the next question: what strategy have I employed to counter being disregarded?

When I look, I have chosen to be surly, and be harsh, maybe even rude. Yell, call names. Without ever saying what my issue was. Having the embers of resentment flare up every time I feel I am disregarded or treated like a furniture. Often.

My whole coaching style is the result of that original incident… when I didn’t say “That hurts”.

OK, scary, but I will say, when YOU treat me like the furniture, as if I didn’t have feelings, “That hurts”… because it does. I promise.

This article will be most useful for the people who were at yesterday’s class, because here in this article I took the process one step further.

If you want another session to brainstorm on what strategy you employed for life… let me know.

I am more than happy to do another session. Just look how much I got out of it myself.

By the way: it hurts not to have a mentor or a coach myself… Someone for whom I matter as much as you matter to me.