I am reading a book, Habit Stacking. I think all non-fiction kindle books are poorly written… and I hate them. No joy of reading, even if the information is good. This one is no exception…   but the topic is needed.

In my programs, both in the health program and in the “good life” program, you will need to develop new habits. But… to develop a habit by itself is an uphill struggle, and to maintain it is virtually impossible.

Quote of the Day

If you never venture beyond what you know… You’ve spawned your own limitations.

I have been practicing “habit stacking” without giving it a name, successfully. What I am learning is that I can take it to a whole different level. And I can stack all desirable habits into stacks.. groupings, and things will get done…

Do what’s difficult when it’s easy… but it’s easy to say, hard to accomplish. Because what is difficult only shows up when it is already not easy… when it’s needed, what you already gone too far not having done it.

So… habit stacking to the rescue. 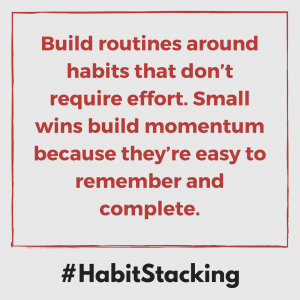 This is how it goes: find a habit you never forget to do, like going to the bathroom, having your morning coffee, or watching television/Netflix.

Now stack a new habit to it.

Here is a simple example: I used to listen to the 67 steps on my computer. Then, when I remembered, I used to walk.

Now, I have the wireless mp3 headset with the chip with all the 67 steps. I will NOT listen to it, unless I am walking. And I find that I walk every day. Victory.

Here is another one: I used to skimp on brushing my teeth. Now that I go and walk every day, I brush my teeth… I would not want to expose the people I meet randomly to bad breath.

Here is a third one: Every night when I pee before I go to bed, I also brush my teeth…

Here is a fourth: Every time I feel like having a beverage, like coffee, I also drink a glass of Energized, coherent water while I am preparing it. My hydration is thanking me for it.

As I said before, you can create an entire list of habits, each taking a minute, two minutes, and make it like a ritual.

I read every night… in bed. I have been since I learned to read. I NEVER turn the light off without reading a little. But lately I have been reading longer… When I feel tired, I breathe through it, and read another hour. I have been sleeping better, and I have upped my reading to 3-4 whole books a week. 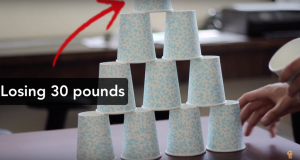 I take my supplements right after breakfast, and before my first cup of coffee… Like clockwork. This way I won’t have acid reflux.

I am planning to add a new habit: before i go to bed, spend as much time as needed to create a plan for four actions that forward my life… actions that without planning I probably won’t not do.

I am excited about this one. I have been trying to have this for seven years, and it doesn’t stick… Maybe with habit stacking I can make it stick.

I am putting the book into the subscribers’ area of the site.

PS: I have been using the 67 steps program to habit stack. I dropped  38 lbs, started to work out daily, my hair grew back and it is now almost black, I am reading 3-4 books a week, I have some relationships other than clients, I feel a whole lot better, etc. etc. etc. All based on habit stacking: starting with an invisible habit built on something I was already doing, to a little bit bigger and a little bit bigger. It works. One other thing that changed: I am a lot kinder… knock on wood… lol.

And here are some interesting things others have said about this.

In 2007, researchers at Oxford University started peering into the brains of newborn babies. What they found was surprising.

After comparing the newborn brains to the normal adult human, the researchers realized that the average adult had 41 percent fewer neurons than the average newborn. 1

At first glance, this discovery didn’t make sense. If babies have more neurons, then why are adults smarter and more skilled?

Let’s talk about what is going on here, why this is important, and what it has to do with building better habits and mastering your mental and physical performance.

Before we talk about how to get started, though, I wanted to let you know I researched and compiled science-backed ways to stick to good habits and stop procrastinating. Want to check out my insights? Download my free PDF guide “Transform Your Habits” here.
The Power of Synaptic Pruning

Meanwhile, someone else who has never played the piano is not strengthening those connections in their brain. As a result, the brain prunes away those unused connections and allocates energy toward building connections for other life skills.

This explains the difference between newborn brains and adult brains. Babies are born with brains that are like a blank canvas. Everything is a possibility, but they don’t have strong connections anywhere. The adults, however, have pruned away a good deal of their neurons, but they have very strong connections that support certain skills.

Synaptic pruning occurs with every habit you build. As we’ve covered, your brain builds a strong network of neurons to support your current behaviors. The more you do something, the stronger and more efficient the connection becomes.

You probably have very strong habits and connections that you take for granted each day. For example, your brain is probably very efficient at remembering to take a shower each morning or to brew your morning cup of coffee or to open the blinds when the sun rises … or thousands of other daily habits. You can take advantage of these strong connections to build new habits.

The quickest way to build a new habit into your life is to stack it on top of a current habit.

This is a concept called “habit stacking” because you stack your new habit on top of a current habit. Because the current habit is strongly wired into your brain already, you can add a new habit into this fast and efficient network of neurons more quickly than if you tried to build a new path from scratch. (Note: I’m not the first person to figure this out. 2)
Habit Stacking Examples

To use habit stacking, just fill out this sentence…

Here are some habit stacking examples…

To get started, simply write out a list of the current habits that you do each day. (Don’t forget about all the boring everyday routines.) Then, write out a second list of the habits you want to start. Finally, pick one habit and look for the appropriate place to stack it.

As a final note, you need to make sure that you stack habits of an appropriate size. Your new behavior needs to be small at the start. You can worry about escalating and improving later.

Now, I have looked at people who teach this, and I have to tell you, it’s expensive.
But…

The method is eerily similar to Kaizen, or the small steps method to achieve big big big goals.
If you are in my 67-step coaching program, $17 a week, where it is really you who decides what, in addition to doing the 67 steps, you want to learn, practice, being guided in, you can gently and effectively start changing your habits, and create habit stacks that can stick.

If you are not in it, but are interested: prerequisites to be considered: your Starting Point Measurements, and 30% cell hydration.