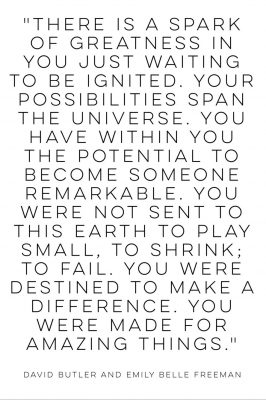 Each great thing that was ever built started with something that had the greatness as potential only.

I was spending quite a few months depressed, going to self help programs, 12-step, Werner Erhard and Associates, etc. … having 3 days worth of work a month to live on.

I couldn’t think of anything to do… I was too entrenched in being an architect. At some point, I did an exercise from the “What Color Is Your Parachute” and found that what I wanted to do, what caused me pleasure, is “put ink on paper and communicate.”

I went and apprenticed (free) with a small printer for a while, and learned some stuff, bought a letter press with some letters, wrote advertising in mail order magazines… to sell some pyramid schemes… and then when I really needed some money to earn, I wrote a letter to the two throwaway magazines in my area, asking if they had a job opening for publisher’s apprentice.

I was trained by another salesperson. We visited a few stores in my town–typical advertisers in that paper. We sold 5 small ads that day. I say “we”, but I think it was her. That day she completed my training. Next day I walked back to the business area of my little town, and found that by the time I got there, the woman who trained me the day before had driven there and sold them, or attempted to. I had no wheels, and soon I also had no hope.

I worked 20 hours a day 7 days a week… I was bossy, I was certain, I was “dynamic”, I was disrespectful… 5 months later I was offered the choice to resign, or… it was blackmail. I resigned. No-brainer.

That same evening I called all the advertisers in my care, the typesetting company and the printer with the same question: Would you take a chance on me for one issue? They all said yes, so next day there was a brand new magazine born, printed and delivered.

I made money with the first issue, and with every issue thereafter. More than $400 a week. 🙂

That magazine, over time, became 90-thousand circulation strong, and I published it for 11 years.

Now, there are two lessons in this story: 1. I first looked what it is that I love so much that I would do it for free (putting ink on paper and communicate) and 2. I was willing to fumble through phases that didn’t seem to go anywhere, and I was rewarded through small corrective steps, with a business I loved.

When I watch internet marketing, I see many thousands who never get started. They got attracted to the visions of greatness (millions of dollars) but are unable or unwilling to start where one needs to start in fear of starting at the wrong place.

I have had coaching clients that were so afraid of making the wrong move, that they never got started… that is until I made them do stuff…

I have had coaching clients that wanted to do internet marketing, but hated every aspect of it… and sucked at it too… of course.

Remember, childhood was to learn skills, without the significance. At least in most countries… of course, in the US kids must perform early on, sports are not skill builders, but opportunities to be big… which teaches us early on that we were supposed to be born with the skills we need, and if we weren’t, then we are doomed.

The same applies in business. You need to play first in the sandbox, and build some easy structures, without the significance. Write an article here, a blogpost there, a salesletter here, make a video there, copy and rewrite an ebook, just to practice the structure… Just to get a feel what you like to do. What you are good at.

Every guru you meet started that way.

My current favorite, Eben Pagan, wrote an ebook, full of typos, and that’s how he started his now 20 million dollars a year empire, 7 years ago. He wrote about something he knew something about: seduction. Something that he was personally very interested in… he desperately wanted companionship…

He has made it big. With a topic like that. He learned as he went. He had mentors, teachers, mastermind partners every step of the way. It wasn’t a straight path… not in the least.

You can do it too. Just start getting that every tree came from a seed sometimes as tiny as a pinhead, and then grew. It went through the phases… It didn’t come out a tree at once. It was a seedling for a long time.

If you would like to join a group that is all about Knowledge, strategy, and execution, I am about to form one…