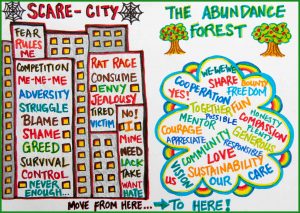 What you find in books, articles about abundance all come from the Dark Side.

Please consider that there is a Dark Side. It will explain a lot…

The Dark Side is created by people with their words, with their visualization. Mind stuff. Some people did that with intentional misdirection, others people: too stupid, too unaware, too shallow to even look… just saying and writing second hand bullshit.

While I was working on getting to a worldview that is most accurate, I studied, deeply, quite a few disciplines and “modalities”… philosophies. For way more than 10 dark years… lol.

Kabbalah’s worldview is that the Truth/Light is filtered down to humans through emanations, a fancy word for “emission” or coming from Source. The closer an emanation is to the “Creator” the more its truth value, the more it is on the side of Life.

Remember, paradigms are like concentric spheres, separated by one-way mirrors. From the higher paradigm you can see the lower, but from the lower you cannot see up, cannot even know about the existence of a higher paradigm.

One of these worldviews, Theta Healing, has a 7% truth value. But the woman who created it is quite “hooked up”… she sees some things eerily accurately. Some things. 93% b.s.

She talks about planes, which is as good a word as paradigms to express the emanations from Source, Truth, Light, or whatever it really is. That we may never find out.

She puts every darn thing that human imagination can create, the mind stuff, on the fourth plane.

The fourth (and maybe the fifth) plane is Plato’s Cave: the interpretation of the shadows.

No direct connection to reality… only the interpretation of it. 1

The common element of everything that lives on the “fourth plane” is that it is made of words, by words.

Words have power… on humans. So the fourth plane is a power center, and its effect on humans is tremendous.

The fourth plane is NOT on the side of Life… it is very very very far from Source, from the Light, from Truth, from Life. How far?

Let me measure the truth value of the fourth plane: it’s 2%.

The fourth plane is the mind: Plato’s Cave.

Now you see that a book, a teacher, a teaching having a 7-10% truth value is amazingly high, given that humanity tends to live in their minds… or as the Kurds say: in the bull’s ear. In the 2%.

Even some of the best teachers teach stuff that is a fallacy, aka a mistaken belief, stuff based on unsound argument.

The essence of the teaching of favorite and popular teachers:

I have been really fortunate in that quite a large percentage of the people who ask for their Starting Point Measurements are healers, practitioners, coaches… leaders in the world. I can see where they are duped themselves.

I hate to tell them what I need to tell them: they are disseminating the energy of the fourth plane, they base their whole methodology and teaching on a 2% truth-value method.

Why do people who use fourth plane techniques ever produce results? Because the fourth plane is very powerful… it is like a power center… except that it is the Dark Star… The Death Star.

Depending on the recipient’s own energy and worldview, it either works on them or it doesn’t.

It’s all in the words. The words that paint a future cause the results…

Here is a guy I am studying…

Yesterday I started to read the first of four books by a dude (I’ll decide if I want to use his name later… not yet.)

I have been watching him ever since my one-time Russian friend raved about him. I am ambivalent about this dude: sniveling cry-baby on one hand, wise beyond his station on the other.

His vibration, mental acuity, worldview, number of capacities available, really, all her numbers are lower than what you would want in a successful entrepreneur/writer.

Make himself sound attractive, vulnerable, human size, unthreatening. Rare ability… makes his results go through the roof. Of course he is not authentic at all, so he hates himself.

I’d rather be me than have all his money and have all that darkness. He is a great example of why things people teach don’t work.

Three distinct layers to this:

So, what does this mean to you? What does it mean if you want to journey from scarcity to abundance? Or from wherever you are… to abundance?

In the previous abundance article I wrote that the first and most important step is a shift in attitudes towards yourself, towards money, towards other people, and towards work.

No shift, no change.

So what causes a shift? Not understanding, not an insight, but an actual shift?

It is a conscious action that comes from the insight that causes an actual shift in your attitudes.

The action you are looking for is the kind of speaking that is action, not mere words.

Most speaking is cheap… yapping. Babbling. Describing. Justifying. Explaining. But some speaking is action…

The words that are actions are requests, promises, and declarations. (you could claim that agreements belong here, but agreements are really requests and promises)

Requests and promises are easier to start with than declarations.

Each person has a different level of integrity… most people’s integrity is very low, talking about their history of no connection between speaking and actions.

What you want to do is make it more difficult to face yourself in the mirror if you don’t do what you promised, than actually do it. Or if you are really smart, get an accountability partner you are afraid of…

So what should you promise?

You may have to ask lots of questions to get to clarity, to get to a promise that you can fulfill upon and will take you to the shift in attitude… Why it’s so hard? because, unfortunately, this is not something anyone I know of teaches. On how to make a promise (or a request) that is clear, concise, and the perfect action for you to accomplish what you want to accomplish… to shift your attitude. It’s subtle…

I will teach this in detail, and coach people in it in the Abundance course, but for now choose what is just beyond of your reach… just a little stretch. Teach yourself to stretch, and enjoy success. Your TLB will grow, and your self-love/integrity will grow. And the attitude you target will change subtly.

In the comments section of this article you can ask me questions, and I’ll answer them to the best of my abilities.

Just know: without knowing you, the answers won’t be of much value. Unless you see that the promise fits you like a glove, you won’t commit to it, you won’t make a promise.

An interesting tidbit: if you have been a liar all your life, full of empty promises… it will take a while for your Self to be able to hear that you mean business.

If you have, on the other hand, some integrity, and the promise is a good promise, you should experience a breakdown after your promise.

For example in 1997 I made a declaration that I wanted to live till 120 so I can make the full difference I was able to make. The context was to have a life not about my life, health not about my health, but about something bigger.

This declaration was the beginning of breakdowns in my health. They were, in hindsight, necessary, because, unbeknownst to me, I was very ill at the time… repairable, but ill.

Now, mine was a declaration. Promises are not as heavy handed… so the breakdown will be smaller.

The purpose of the breakdown is dual:

Your job is, if you want to go from scarcity to abundance, is to do what you need to do to free yourself up to fulfill on your promise.

Or, alternatively, admit to yourself that you won’t. If this is the case, stop yearning for abundance: it won’t be available to you without actions that change your attitudes. Guaranteed. So don’t torture yourself. Be good to yourself. You have what you have: make the most of that.