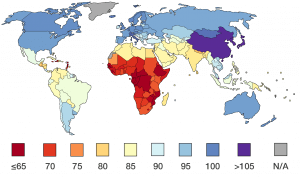 Warning: lots of footnotes in this article! 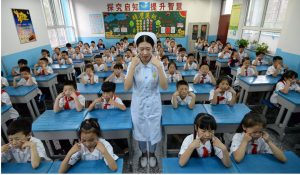 The kind of smarts Jewish or, for example, Chinese or Korean, people manifest is LEARNED.

In the argument, nature or nurture, some ethnic groups have taken the side of nurture. 2

There is one thing that they have, by nature, less… they have less predatory genes turned on than other ethnic groups. Why? I don’t know. How do I know? Muscle testing. Why is it so? Maybe because in their history they spent most of the time in patient servitude.

Between Patience and the number of predatory genes there is a strong correlation.

Patience is very useful if you want to… ever… amount to anything. I am talking about the patience you could call persistence, consistency, tirelessness, preparation, process. The other kind of “patience” I call procrastination, waiting until you feel like it.

I now have an honorary Jew as a student. You become an honorary Jew when you demonstrate patience and brilliance, cooperation, and ambition. The desire to build a huge foundation of knowledge and skills.

So if you aren’t born with abilities, skills, knowledge, smarts, then how do you get those?

If you weren’t born into a culture that naturally and as a matter of fact cultivates those traits, how do you catch up, how do you become an honorary Jew without the big nose? 3

Before I go on, I want to teach you something: hatred, jealousy, and envy are very useful and guiding emotions. Almost all bad feelings are, but for now, let’s address these:

All of those emotions tell you something about yourself. Tell you of your frustrations, tell you what you would like but don’t have but could.

If we consider the sayings some parents say to their children as valid:

…and listen to it not as a child with a child’s magical mind, but with an adult’s mind…

…you may finally hear the truth: your brain is flexible, even plastic, and you can mold it to be able to do what you wish it to do, with patience, persistence, consistency, tirelessness, preparation… i.e. a process.

I have some clients for whom this process, especially consistency, is a huge threat to their world view. Or to their identity.

Identity is not born with: it is created, put together, the result of your particular take on events in your life.

This is how it goes: something happens. To you, at least in your world, it is happening to you, you feel you are the cause of the happening, the center of the universe. It feels unpleasant, or maybe even tragic.

So you ponder how to avoid it the future, and you invent a habit, a new way of being, that seems appropriate at the time.

The birth of identity

One of my clients went through a trauma when he was around six years old… he lost his father and his mother at the same time, not due to death but due to abandonment. He decided that it was his fault.

He invented the identity of the happy go lucky boy, with not a care in the world with a boisterous laugh. He became an escapist adult entirely focused on impressing others, while inside he is dying. Dying for satisfaction, dying for direction, dying for a life worth living.

Being the happy go lucky person with the boisterous laugh doesn’t jive with building abilities, skills, knowledge, or taking things seriously, investing himself, committing to anything, hard work, persistence, consistency, effort over time.

The voices in your head

“It’s not going to work,” the voices in his head suggest, “just do your brilliant brainy persona, that is who you are!”

Of course two things happen at the same time: the same old, and dying inside. They are like the front of the hand and the back of the hand. Inseparable.

This little boy is still craving mommy’s love, but mommy is not coming. And even if she did, what happened at age six cannot be made right, decades later.

It’s time for him to rein in (not reign!) the unconscious tendencies of the identity, and become a man.

Each and every person who has big desires and lives a small life, has a similar story to tell.

At an early age they decided on an identity that is diametrically opposed to, mutually exclusive with practicing capacities that build character, and a foundation on which any future can be built.

I am learning to help people who have a strong dependence on outside guidance and encouragement… even though I myself never got and never needed any. So they are different from me, but I can provide what they need: encouragement, opportunities to shine, and a tight ship. All and at the same time, as a team of guidance.

In the novel, White Fang, life and the humans provided this for the young wolf: discipline and reward, so he could evolve into a wolf-being… just like you can evolve from a human to a human being.

It takes a lot of doing, a lot of practice, that at the time doesn’t make sense, and may even be painful.

My work with you is often painful, often doesn’t make sense, and often looks hopeless.

I am starting to realize that the last but mandatory ingredient is faith.

Your environment doesn’t provide it. You don’t yet have it inside you. If you are going to have any, it has to come from the outside. You need it if you’re ever going to win in this game we call life.

I have realized that faith, at least in the beginning, has to come from me.

I have to remind myself a thousand times a day that holding the faith for you may be my primary function in your evolution.

I think this is what Werner Erhard meant, when he said: I paraphrase “I can stand in front of what-is-not-working (yet) longer than others.” 4

Now, having faith in a world where not many others do is unusual… but possible. I am not talking about the magical thinking faith that comes with rose colored glasses… in the face of human nature, or reality. No, I am talking about seeing what is possible, what is probably with right treatment, right communication, right actions… like in this little video on growing a carrot

Standing there, and keep standing there is what faith is. It’s not words, it is a beingness… And although it is not innate to me, not even natural to the judgmental Virgo, or the superior “Forget Thyself” person, I can hone it, strengthen it, because that is what is needed. Me evolving hand in hand, side by side, with you.

There are two types of coaches, the Rainmaker type… they need clouds, rain clouds, to even take on a client. And the type I need to be, I’ll call it, for now, “evolutionary coaches” who take you from where you are to where you need to be to have a life you love and a life you live powerfully.