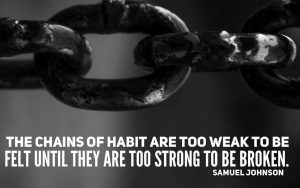 What do I mean too late? I mean this: The chains of habit are too light to be felt until they are too heavy to be broken

This saying sounds like the god honest truth, doesn’t it? But when I muscle test, it is only 20% true…

Why is the truth value of something universally accepted as truth?

It is true, because it takes effort and intention and commitment to break bad habits. And we, humans, are not very motivated to change any habit, let alone a habit that gets us pleasure… in another name, payoffs. But when people can see, when people can own that they pay with their lives, a lot more people are interested and are willing to make efforts…

The biggest hindrance is the goodies… What goodies? you ask.

Human behavior is driven by invisible dynamics. Invisible, because someone needs to point it out to you. And dynamic because the best description of it is that it’s like a machine, or a mechanism.

Invisible dynamics earn us goodies, goodies that we pay for with our lives.

All payoffs are some version of “desire to receive for the self alone”…
All payoffs satisfy the insatiable hunger of the part of us that we could call the dark wolf.

These goodies are temporary, transient pleasures that seemingly cost us nothing… But somebody pays the price for them… another person or our better self. It cost us self-love, self-respect, our health, our finances, and affinity to others.

These payoffs cause us to be split, kind of schizophrenic… A schizophrenia where one hand doesn’t want to know what the other hand is doing.

Your resistance to changing your habits is really a resistance to giving up the goodies, the poisonous fruits of the desire to receive for the self alone, the temporary and transient pleasures.

Nature, life, wants you to have a low “about-me” score, so you have room to consider life, nature, and others… to the degree that your about-me number is high, to the same degree you cannot even see that there are others deserving a life… Life is all about you.

In human society you only get miserable, unsuccessful, unpopular… in nature you die… because in nature you need to consider where you step…

Desire to receive for the self alone makes you a perpetrator… you are against others’ right to have, be, do.

The more you insist on fulfilling your desire to receive for the self alone, the higher value you place on the goodies you get as a payoff for robbing others for what is their due: their own accomplishments, their right to be an individual, to live their lives their own way.

But, of course, for the perpetrator it is all pleasure he is entitled to.

What is perpetration? When you cause another to have less life than what they would have without you doing what you are doing…

What was first, the chicken or the egg?

Each soul correction is “designed” to have a different but typical attitude toward others, toward something not working, toward life.

This typical attitude is like a machine… and it is the hidden payoff that keeps it running. The payoff is both the grease and the fuel for the machine.

The Playground is a year long course to enable you to start dealing with reality, instead of unreality: the valley of the death…

That is the essence of the work in the Playground. Every partner call, every webinar is about distinguishing what happens in reality where there is nothing wrong…

But my students haven’t had the courage to see all of the invisible reality. Why? My newest information is: because what they would have to see is fundamentally wrong for them.

Seeing a parent’s violence, a spouse’s greed, a child’s disrespectful or inane behavior, etc. as something that shouldn’t be, something that is therefore wrong.

Say you… but it is not wrong in reality. An animal mother letting their offspring die, instead of dying themselves, carnivores picking the weak of a herbivore for dinner, snakes biting, dogs and wolves howling, elephants stomping, all that is normal in reality, not wrong.

Or you being an addict: it is not wrong, it is just not very good for you.

When I did my first 12-step program, I picked as “higher power” instead of a customary god I didn’t believe in, I picked “whatever works”…

This was back in 1988… about a month after I declared that my life thereon was not going to be about me… like until that fateful declaration.

This “higher power”, choosing to look if something works or not, makes life work or not, gets me really what I want… has been my secret weapon in my growth. Still I had a hard time learning stuff about myself that neither worked nor did I like them. It has been hard, and it’s been a “trip”… from total misery to almost total joy.

You don’t want to see the ugly. The nasty. The disgusting. The criminal. The unfair.

And the dark wolf, the ego, will do whatever it needs to do to protect itself from being seen… because all that, all those behaviors, thoughts, inclinations come from the dark wolf.

You pay with your self-love, your affinity to people, your loved ones in particular, your health, your money… the quality of your life.

You organize your life around the insatiable appetite of the dark wolf… and you feed it and feed it while you are starving yourself. You are starved for self-respect, for dignity, for love, for self-love.

When we remove the illusion, that you have to give up the goodies in life, all pleasure… the deal is a lot simpler: you really either feed the dark wolf, of you feed the white wolf.

You really either feed the dark wolf, of you feed the white wolf.

Layer upon layer of lies and pretense cover it up even to yourself. Or especially to yourself.

In the Playground you, thus far, you have managed to skirt it, avoid looking at it… to my dismay.

In fact it is so bad, that even when I tell you, exactly, you manage to not hear it.

In another advanced course, the “Instant Coherence” workshop, you get a whole lot more personal time from me… and thus far the participants i have worked with have been able to hear, nod, and not do anything about what they saw about the dark wolf. Mortifying to me…

To me it is eating food that you said was disgusting… and you keep on eating it… smack your lips, chuckling or pretending to be sad…

In essence, what I have learned about you is this: you prefer feeding the dark wolf and give lip-service about what you would want if decided to feed the white wolf.

Why you don’t decide? Why only lip-service? Beats me…

I guess we live in a world of humans who want only the instant gratification of the dark wolf, and none of the stuff their memes tout as inspiring.

I’ve promised that I will either succeed or die trying. Most days I wish I could die already.

PS: as it often happens, an email just came in to show me something about you.

She is a Playground participants… A few minutes ago I wrote to her:
Every single of your incidents has this racket (invisible dynamic) running. With your husband, with your son, with your horse, with friends.

What is attacked is your picture of yourself… who you consider yourself to be, your precious “I”.

In the Playground we look at incidents where life doesn’t go your way… So incidents are when you are annoyed, frustrated, angry, disappointed… as a result of something “wrong” happening.

Yes! This hit a spot!

But just thinking about letting go of this attitude or the expectation of being attacked creates fear again. Maybe of being vulnerable if I let my guard down? I don’t have to let it go yet, do I? It’s enough to just start seeing and owning it?

Gotcha! You don’t want to let go of the goodies… that come with the misery.

But if you consider the whole thing as feeding the dark wolf,

You don’t have to let go of the goodies, you only have to feed the white wolf…

But what would feeding the white wolf look like? You have no idea, do you?

You haven’t even looked there, maybe ever.

That is the second half of the work we do in the “Instant Coherence Workshop“.

The digging is the first part. The identifying what the black wolf does, exactly. Simply owning it could often be a beginning of a new life…

For example, being an addict is a black wolf strategy to make you avoid life, make you avoid doing work in life, avoid effort, avoid feeling real feelings.

Owning that you are an addict, with no freedom of your own, owning that you live on a short leash from your addiction, that you allowed only very brief periods where you can just be is a potential turning point for most people.

I may be getting addicted to a type of fiction… I’ll look. I’ll test it. And I’ll choose…

Addiction is always doing one thing instead of many other things that would work better.

Until you own who you are, until you can choose yourself to be exactly how you are, and how you are not, you are not going to be able to choose anything else… and choosing is hard.

It is not choosing between options. No.

It is choosing what you have. What is. Unless you can choose it, you cannot un-choose it.

Choosing is hard, and yet it is just the first step. Choosing takes time. This is the reason I have the Instant Coherence Workshop delivered in two parts.

You are not ready for the second part, until and unless you are ready…

The first part that everyone just loves is revealing the dark wolf.

And only when you are disgusted enough with the dark wolf will you be eligible to work with me to define the white wolf for yourself. There is no telling ahead of time if you will or will not opt for the white wolf…

But if you don’t know what the black wolf is doing… you’ll never really get ready for the white wolf.

Let’s dig out your dark wolf…