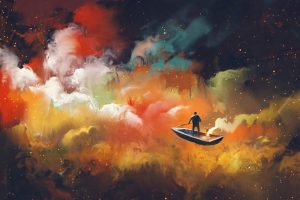 Self-awareness is the rarest of all the human virtues. Why? because it is all inner… and unless you have it you won’t even know you have it. And unless you grow it, you can’t change.

This is one of the things I measure in the Starting Point Measurements.

The numbers I get are between 3% and 20%, with 20% is being rare: I only found, so far, one person with that level of awareness.

So what can you notice if and when you are self-aware?

You notice your feelings and your emotions and then interpret them. Explain them.

We (and psychologists) have established that emotional intelligence is crucial to the quality of your life. Your life experience.

Unless you know what you feel, unless you really, astutely identify it, you will react to what you think you feel… and the two are not even similar.

It is one thing to have a large vocabulary of emotional words. But it is yet another to see below the surface, and see the true motivation for the feeling. 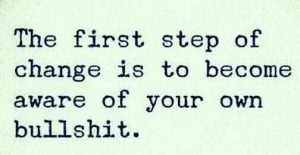 Everyone has an opinion, and we know that. But you probably don’t know that everyone also has a racket. A way to get, extort, strokes: i.e. a way to get nurturing strokes from others.

Any response is good enough to fulfill the need to be noticed… good or bad… depends on what your life circumstances taught you… plus your bend according to your soul correction. 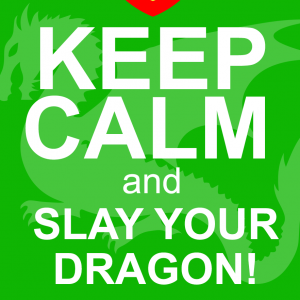 I favor the “bad” strokes for myself: unless I did something that my parents didn’t like, I was invisible. And being invisible feels like you don’t exist, you won’t get sustenance, because being noticed feels necessary for survival. So I misbehaved, and got strokes. I am always bratty and sometime I am bossy. That is how I extort strokes. Let me explain…

Sounds really weird, but when I wasn’t beaten up any given day, I KNEW they didn’t love me.

Love and being noticed are the same thing for a child. Getting attention means love…

The child who won’t let her shift-worker father sleep because she needs to be noticed, so she makes noise… has a Bratty racket. And unless she gets AWARE of it, she will continue extorting negative strokes… as her only means of getting strokes. And complain, weep, etc. about the strokes she extorted, saying she deserved better.

Anything that can open your eyes to how you are REALLY in the world, and what strokes you aim for is good for the purposes of increasing your self-awareness.

For example in 2007, if I remember correctly, I bought the Healing Codes. I found out that I had an issue with kindness. I had been getting strokes for being unkind… I have a Bratty racket. Obviously.

Kindness, doing good, never got me any attention, so I became bratty. But I didn’t know people wanted, hoped for kindness from me: it wasn’t part of my “behavioral makeup”… and guess what: it still isn’t. But becoming aware of it, I can now be kind at will… although it still doesn’t come naturally, and it doesn’t get me any strokes. 🙁

But if you asked them, they don’t know that yet. They probably consider themselves helpless or helpful. Or nice. Or stupid. Or abused.

There was almost a moment in my life where I got aware that I need strokes, and that it is MY JOB to give them to me.

It wasn’t a long time ago.

Magically, at the same time, I started to be perceived as a lot kinder that I was before. I experienced myself a lot freer, and “gasp”, playful.

I am still overbearing, which is a bratty way of being, but I am a lot less at the expense of another… a lot less. The racket didn’t disappear: you can’t fix a racket, you cannot change a racket, you can only be aware of the trigger that brings on the racket: being needy of a stroke.

And having a choice.

Being able to give yourself a stroke is what gives you choice, not suppressing the racket: that doesn’t work.

I have found an article from 10 years ago. I didn’t write it. But I liked it enough to save it on my hard drive.

It’s from an online “dear abby” type of column.

In it there are examples of low self-awareness. Can you identify the rackets in the examples? Remember: Helpless, Bratty, Helpful, Bossy are the four main types…

If you do, email me, or post a comment. I am curious how well you can identify something in others that you probably cannot identify yet in yourself. 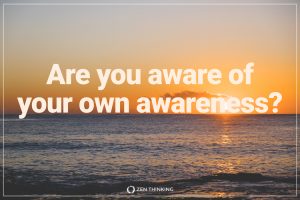 PS: By the way, I just went to the kitchen to make myself a cup of coffee and I noticed extreme anxiety welling up. I muscle-tested and it was mine. My “inner child” got all worried that I am going to say good-bye to all the strokes brattiness gets me… and I will die from no strokes…

So beware: if anxiety comes up: it is a good sign that you are starting to pay attention and maybe get close to who you are being that earns you strokes. OK?

OK, here is the article I want you to read and express your view on the rackets shown in it:

Question:
How can I make sure that the way I view myself is not too far removed from how I am perceived by others, or how I really am?

Once in a while I come to the realization that a friend or family member has an opinion of themselves in a way that is completely opposite the way that I perceive them. Recently I have experienced that same jarring dissonance in one or two ways, and want to find ways to make sure I’m not deluding myself about myself.

One example: An old friend is in his early 40s and has a low-paying government contracting job. He lives with his parents to save money, and as far as I know does not pay rent or contribute to household expenses.

He has, in total, perhaps a couple of thousands of dollars in savings to his name. He has no traditional kinds of investments or savings (CDs, an IRA, 401(k), bonds, etc.) Instead, he has put any extra money that he has into a microloan lending site (Kiwa.org).

When he gets a loan paid off, he lends the funds right back out again. Sometimes he has lost money this way. Anyway, he likes to call himself an “angel investor”.

Whenever I hear him say that I just have to roll my eyes. I see that he likes the respectability of this label, but he does not even live life as a financially independent adult.

A more personal example: As the mom of a young child I like to think that I can provide helpful advice to new moms (when asked!). I find myself weighing in (I’m talking about in real life with acquaintances and friends, not online on sites like AskMeFi) on topics whether or not children should have TVs in their room to how to deal with a toddler’s tantrum at the supermarket. But then I worry that instead of sounding like a wise been-there-done-that resource, I come across as a judgmental know-it-all.

I know it’s not really possible to truly know how you present yourself to the rest of the world, and that if I’m talking to two people at once, they might easily each come away with totally different impressions of me, depending on their own experiences or prejudices. But is there some way of thinking about this that can help me give myself a reality check about my own perceptions of myself vs. how I present myself to the world?

Thank you all in advance for your thoughtful responses.

Answers by the visitors of this site, https://ask.metafilter.com:

4 thoughts on “Self-awareness… what is it and why is it crucial to have it?”