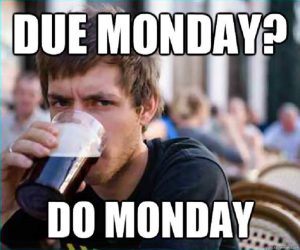 It’s really hot here. I don’t use air conditioning, and I don’t sweat. So I am really hot. And I am still digesting a lot of things… and it’s not a good idea to write about half baked stuff… or not often.

I don’t feel like writing. But I feel like telling you something, so I whipped out my headset and made an audio… a podcast if you will.

I learned this method from MY mentor, Robert Plank… you can talk a lot faster than you can write… and it gets you over the hump…

It was inspired by this article and this TED talk.

and below is the article:

Procrastination isn’t shameful or a character flaw. Instead it’s rooted in a very human need: the need to feel competent and worthy, says educator Nic Voge.

This post is part of TED’s “How to Be a Better Human” series, each of which contains a piece of helpful advice from someone in the TED community; browse through all the posts here.

“It’s 11 o’clock. You’re in your dorm room, and you have a paper due in a day or so. You sit down at your desk, you open up your laptop to get started, and then you think, ‘I’m gonna check my email just for a minute; get that out of the way.’ Forty-five minutes later, you’ve checked a lot of email,” says Nic Voge, senior associate director of Princeton University’s McGraw Center for Teaching and Learning in New Jersey, in a TEDxPrinceton talk. “You’ve done a really good job of that, but now you realize, ‘You know what? I’m pretty tired. I’m kind of exhausted, and that’s not conducive to writing a good paper. What do I need? I need to go to sleep.” And you do — only to wake up and go through the whole cycle of delays-and-excuses the next day.

Is this you? Rather than a college paper, maybe it was a report for work, graduate program application, peer review, or some other important thing that you kept kicking down the road until the road ran out and you had to deliver.

You probably scolded yourself for your behavior. And wondered, “Why am I so lazy /weak-willed /disorganized /unmotivated /hopeless /[fill in other belittling adjective]?”

Well, Voge has good news for you. “Procrastination isn’t shameful. It’s not a sign of weakness. It’s not a flaw,” he says. “It’s actually pretty predictable; it’s something we can really expect if we understand the dynamics of motivation,” At Princeton, Voge develops, designs and directs academic support programs for undergraduates. He’s seen procrastination in all its forms, and he has also, he confesses, “mastered the craft and art of procrastination — the mind games, the rationalizations, the justifications.”

There are many theories about why we procrastinate. Some have said it’s about the inability to cope with difficult emotions; others, that it’s connected to faulty time management or perfectionism. Voge, however, believes it is rooted in our self-worth. He explains, “The paramount psychological need that all of us have is to be seen by ourselves and others as capable and competent and able … and we will actually sacrifice or trade off other needs to meet that need.”

To be clear, the need to be seen as worthy or worthwhile is not the problem. Where things go wrong is that some of us depend heavily on external feedback — in the form of good grades, praise from bosses, parents, in-laws or other authority figures, or the acceptance of prestigious organizations — for those feelings of worthiness. Voge says, “People who procrastinate a lot have a kind of simplistic equation in their mind: their performance is equal or equivalent to their ability, which is equal or equivalent to their self-worth as a person.” Or, as he puts it: performance = ability = self-worth. The reason we’re so terrified about performing poorly on that paper, application, analysis, etc. is because we feel our ability rests on it — and our value as a person.

In the performance = ability = self-worth equation, the only variable we can control is how much effort we put into our performance. When we procrastinate and put in less effort, we’re doing it as a form of self-protection, according to Voge. That way, if we earn a bad result, it doesn’t mean we’re not talented, able or worthy; we were just too busy or distracted to do our best.

Think about the murmurs you inevitably heard before exams in high school or college. Voge asks, “What are people saying? ‘I only studied three hours.’ ‘I only studied two hours; my computer froze.’ Everyone’s explaining how they’re not ready. Why? Because if they don’t achieve, then they have this built-in excuse not only for themselves but for others.”

Anyone who has ever procrastinated has experienced that feeling of stuckness. “Many people describe procrastination as being stuck at or against a wall or an obstacle they can’t get over,” says Voge. “We are often agitated, we can’t sleep — but we [also] can’t work.” At those times, we find ourselves pulled between two equally strong and compelling forces: the drive to achieve and the fear of failure. We come unstuck only when the fear of not getting things done overrides our fear of failure.

How do we break the cycle? Voge highlights three strategies:

1. Be aware of what you’re doing and why.

“We know from the research on procrastination and overcoming it that gaining knowledge and being aware of self-worth theory in these dynamics helps people over these things,” says Voge. “To understand the roots of procrastination helps us weaken it.” Your procrastination is probably not coming from a place of self-loathing or self-sabotage but from a need to protect yourself.

Know when you’re procrastinating. Sometimes it’s obvious; there is absolutely no reason for us to do the laundry before we write that grant application. At other times, it’s more subtle, so you may need to check in with yourself: “Yes, removing old files from my computer desktop will give me a less distracting workspace, but is it essential that I do it right now? Or am I just postponing writing the application?” Pro-tip: If you have to ask yourself whether you’re procrastinating or not, chances are you are.

Get familiar with your “greatest hits” of wasting time. Most of us have specific fall-back activities that we do when we’re playing the delaying game. What’s yours — house-cleaning, napping, shopping, reading email, catching up on Netflix? Learn to recognize it so you can nip it in the bud; it’s much easier to prevent falling down the cleaning /napping /shopping rabbit hole rather than pulling yourself out. Voge says, “The greater awareness we have of our tendencies and our motivations, we’re more likely to overcome them.”

Our progress towards completing any activity is affected by “approach” motives (reasons why we want to do this thing) and “avoid” motives (reasons we don’t want to do this thing). With activities that we have no hesitations doing — let’s say, eating something that’s delicious and healthy — it’s because we have many “approach” motives and very few “avoid” motives.

Many procrastinators have the mistaken belief that the reason they’re putting off a task is because there’s an underlying reason they don’t want to do it. “Often, that’s not the case. It’s simply that their fears dominate or overwhelm their ‘approach’ motives,” says Voge. When you’re playing solitaire instead of performing a competitive market analysis for your boss, it could be because your “avoid” motives — in particular, your avoiding the project because you’re terrified you’ll fail — outweigh your “approach” motives.

When this happens, think of all the reasons why you want to do this activity. It might help to remind yourself of how completing it fits into your larger goals, objectives or mission. Then, if it seems especially big or intimidating, break it down into manageable pieces. When Voge found himself procrastinating writing his TEDx talk because it seemed so daunting, he decided to create an outline so he could write his script section by section. Warning: Just resist turning that outline or to-do list into an invitation to procrastinate further.

We need to undermine the ideas that brought us to procrastinate in the first place, says Voge. “The equation that we carry around in our head is flawed … your ability is not equivalent to your worth.” He adds, “Our worth derives from our human qualities of kindness and thoughtfulness and our vulnerabilities.”