Yesterday I wrote about seeing reason, seeing the causal relationship between things.

I confess that it is a hard thing to see. Not just me, but everyone. Cause is in the invisible realm of reality… it is there, but it is rarely seen.

The Butterfly Effect comes to mind, that says through a string of invisible cause and effect happenings, a butterfly flapping its wings in Japan will cause a tornado in Arkansas. According to Wikipedia: Butterfly effect: In chaos theory, the butterfly effect is the sensitive dependence on initial conditions in which a small change in one state of a deterministic nonlinear system can result in large differences in a later state.

So it is not easy. But… and this is what this article is about, most people lack even the curiosity necessary to see causal relationships: they don’t care.

If you don’t have a capacity, you also lack the capacity to see what would it entail to exercise that capacity.

So why would it be that students buy the activation of a capacity and not even ask for suggestions on how to co-creatively keep it on?

If you cannot think, and seeing reason needs thinking, then you won’t see the difference between fact and fiction, between reality and the story.

If you are in my Playground, your job is not more and not less, than to see the difference between reality and the story.

See the difference between “it’s wrong” and “I made it wrong”.

80% of my Playground participants can’t see that the wrong, that the drama comes from them. For them it still feels part of reality… but, of course, there is no drama in reality, no wrong in reality… in reality things only are… They are neither wrong, nor right.

Strong wind is just air displaced by temperature and pressure differences in the space… and the wind destroying a dwelling is just cause and effect… not a tragedy. Tragedy arises only in language. Not in reality.

Seeing reason, the fully open capacity is so rare that one could say, it is superhuman… even though every single person has that capacity, not active, in their DNA… so it is part of the human design. 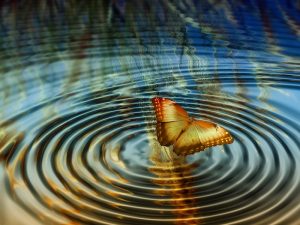 The really rich self-made billionaires do most of what they do in the invisible… they see reason… and they act consistently with what they see. What causes what…

You see whatever you make up, and you act on that.

Your results are different. You don’t see the causal relationship between things, you see the tip of the iceberg… and you act on that.

So you always work on a symptom, like the medical establishment you love to blame. They are like you: they don’t see the cause.

Sometimes, as a teacher, you have to pile on what the students are not getting, to drive up the reason.

This is exactly what I have done. I didn’t understand why people are not getting the distinction: there is nothing wrong in reality… so I added another one: your human design: you are either to wait for an invitation when you act (if you are a Generator according the Human Design) or you are to act on your idea and inform others about what you are going to do.

But, of course, before you can use that information, you need to see what the heck it means to wait for invitation.

These are actual examples my students haven’t looked at… because they aren’t getting the causal relationship between acting according to your design and your results in life, the quality of your life…

Because seeing reason, seeing causality, is missing. Missing for them, missing for you.

Or seeing the relationship between your lifestyle and the diseases you contract.

For example, people whose eating style is to eat by appetite will get sick, and incoherent, sleep poorly, and be in a bad mood if they eat anything when they don’t have an appetite for it. But unless you know appetite, you will… and knowing appetite in a world where you have all kinds of urges, is hard. Urges are not invitation… while appetite is. Urges are loud, intense, while appetite is quiet and smooth.

As I quoted yesterday from “Leonardo and Gabriel”, the book by Tim Tigner,

“The guide God gave you is called happiness. You please God when you do today what will make you happy tomorrow. Happier over time.”

All quick wins are transient, temporary, and will make you less happy tomorrow.

Lots of people are stupid in the way of “stupid as the stupid does”. They have potential to be intelligent, to make good decisions, to do life well, but they don’t.

Lack of reason will definitely make you do stupid things.

The way to make good or at least better decisions is to start turning on capacities by starting to create situations where you need them.

If you could just learn to make decisions on what to do, when to do it according to your design, including eating according to your eating style design, your life could become a whole lot better. And you would make much less mistakes.

Now, that alone should make you want to do it.

Here is to get your eating style

Get your Eating Style Measurement
And here is to get the “Seeing Reason” activated for you.

And here is to get your Human Design profile. You just really need your type… and your strategy to make decisions.