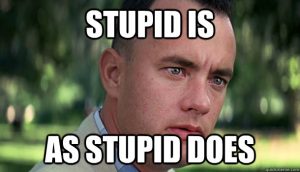 Yesterday’s “Trapped” article made some splashes and produced some “no echo” dead silence.

It spoke to rule-making, and defined stupid in a new way.

It separated the label “stupid” from the person and placed it on the behavior.

Stupid, as a label on a person, is a future tense “sentence”… sentence as in “the judge sentences you to a lifetime of stupidity”. No appeal… Final decision.

Meaning: no matter what you do, who is doing it is a stupid person, and THEREFORE what you ACTUALLY do cannot produce the result you want.

You don’t need any more proof of language not even approximating reality, that sentence, that meaning is all you need to see that if you are trapped in the customary language, especially your “self-talk”, and take it at face value, you are doomed. Doomed to the attitude of “no matter what I do”…

There is a hidden and thinny thin benefit there: you don’t really have to do anything once you start applying that attitude, that doomed attitude. There are some goodies: no need to make any effort… and you may even be able to hide the fact that you are that… stupid, lazy, inept, uncoordinated, ugly, fat, whatever the self-talk labeled you as.

Now, in yesterday’s article I cut through the bullshit, and said: 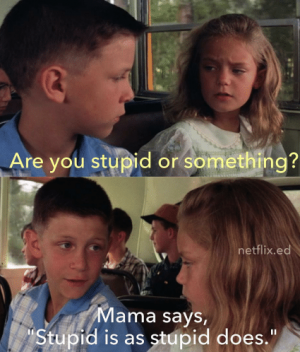 2. Ideals. Ideals, by their definition, are unattainable. They are pie in the sky perfection, flawless. Flawless does not exist in reality. It is beyond the realm of possibility. The earth wobbles. The weather changes. You are cold and then you are hot.

But for those who are trapped in measuring themselves or their lives against some ideal, reaching those ideals is a must… and because it is impossible they are miserable.

Having ideals, unattainable “goals”… is the perfect way to do stupid things, and not amount to anything. The higher that gap between your desire number and your ambition number, the more you are trapped in this particular nasty trap…

It is what it is… as long as you have these things, these shoulds, and these rules operate, you can count on action stupid.

One person, underachiever, of course, got it and experienced, suddenly, a new freedom.

Thank you for the article “How you are trapped ….. your standards and ideals. Rule making…Wanting to succeed every step of the way

I saw through reading the article I am one of these rule making people. Especially after the call with my partner my machine-move completely took over.

First I went into despair as some kind of false belief penance for my perceived wrong behavior when there is no wrong in reality. Reading the article I saw: what I did was Just stupid in action.

I accept I messed up, may be suspended from the course, and I am where I am. Nothing wrong – It has really freed me up: there is joy there and I am grateful ……

I have struggled with this acceptance by judging myself and being miserable as if suffering were a Right way to be in the eyes of the world –  because I am wrong in my behavior. My religious Catholic upbringing where I was taught to fear every perceived wrong behavior and never I questioned it

Thank you for not suspending me: this is the best news.

Spectacular, isn’t it? Suddenly it sheds light on why on earth would my students pretend to be remorseful when they are really gleeful…

They got off the hook.

They are, the being off-the-hook people, who say: “no matter what I do”…lying through their teeth. 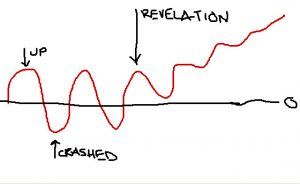 I remember being around eight years old, my mother was beating me (as usual) and my father came to the room, and said: “Don’t beat her head, she is already stupid!”…

For decades, long decades, half a century, I tried to prove to him that I wasn’t stupid. And no matter your IQ, no matter how many skills you have, how many languages you speak, how hardworking you are, you are going to be doing stupid things when you least expect it. 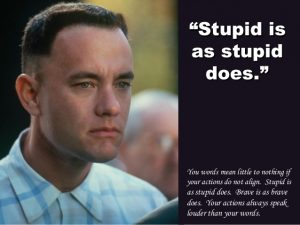 Finally at age 49, I decided to embrace that I was stupid.

I looked at my life, and I said: hey, I do stupid things… So might as well say: OK. I am stupid.

And that could have made me miserable for the rest of my life. Instead I decided that I was going to look for people to emulate, who did really well in life, even though they didn’t get good grades, didn’t have many skills, didn’t speak many languages… didn’t read, didn’t have an education, but yet they were doing spectacular things. 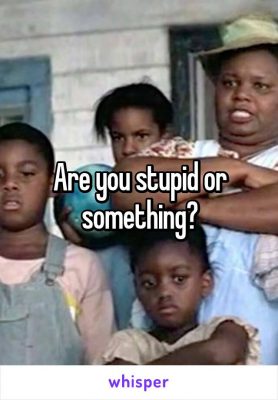 I picked Barry as my model.

Barry’s father died when he was 12. He promptly quit school and never went back again. He washed glasses in bar, he mopped the floor, he worked.

When he turned 20, he bought a small bar from his savings on Lexington Ave and 40th street… the bar is still there.

A few years later two older guys invited him to become managing partner in their club, and he accepted. He married one of his barmaids, and was on his way to become a multi-millionaire.

I knew him when he already had four clubs. I did his advertising… in my paper. He was simple, but he was shrewd. He operated a tight ship with maybe four-five fundamental pieces of principles… He was consistent, maybe even boring. Hell, he was boring. He knew, through trial and error and through observation of other businesses what didn’t work, and he distilled life and business down to four-five elements…

He wasn’t witty. He wasn’t anything to write home about. He didn’t know five-dollar words. For all intents and purposes, he was a moron. But he felt fulfilled, he was rich beyond rich, and I aspired to learn from him his beingness.

Once I asked what his secret was.

I remember we were in this apartment building waiting for the elevator. As we entered the elevator he said: My mother, every time I had some doubt, said to me: “You can do it”

He said it with a certain sing-song voice, like a mantra.

He unstuck me from some self-inflicted traps many times by saying that now TO ME over the phone: You can do it.

I am in love with that sing-song sentence: You can do it.

You see, I wanted to be all I could be, but was trapped. I started to pay attention to the doing… and that always unstuck me… and it still does today.

Here is an example, just from today.

I have an enlarged heart with a hole between the two chambers… Heart murmur is what clued the doctors in some 32 years ago.

I have been having symptoms that tell me that my heart is not doing well.

My little brother had a triple bypass a few years ago.

Both my parents died from heart disease.

I have been looking at my life expectancy, and it doesn’t look good.

So this morning I heard Barry’s voice in my head: You can do it. Really?

Really? That was what I always say when the voice speaks. It always comes when it looks hopeless… But just hearing the words, “you can do it”… I start looking not where it’s hopeless, but outside of it.

So this morning I did that… and I saw. I saw the cause of my heart troubles, and I also saw what it is I can do about it.

Whenever you think you are stuck, your cone of vision is narrow, and your field of vision is filled completely with what you can’t do, what cannot be changed, what you fear.

The world is big… and you can expand your cone of vision, or start to move your head if you can’t.

I am going to test this heart remedy idea… that removes plaque from the blood vessels. When I am done, I’ll publish my findings.

Almost everything I have ever “discovered” is due to Barry… and his sing-song “You can do it”.

I am OK with being stupid… I am even OK with doing stupid things… As long as I am not stuck there.

OK… Now, you should ask: what made the “dead” silence of the people who reacted with deafness?

It is simple but not easy to understand if you are not like them:

If you want a free ride in life, justified by your labels, you won’t want to hear that you can do it. You don’t want to pay for the ride…

Of course they pay too… with their mediocrity, with a life that would be worthless to you… but that is the life of the second-hander, the moocher and the looter.

I am very lucky I only have four of them in my course. Their percentage in the population at large is 90%.

Hey, to each their own. It takes all kinds to make the world work.

PS: Watch the movie Forrest Gump. It may change your life

2 thoughts on “Stupid is as stupid does… is it good news for you? what does THAT say about you?”