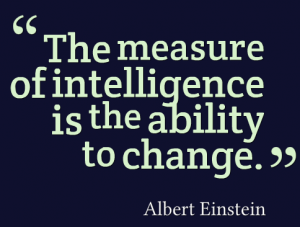 “Adaptability as a skill refers to the ability of a person to change his actions, course or approach to doing things in order to suit a new situation. We constantly change our lifestyles because our world is changing always. … That is an example of adaptability.”

But what happens if you don’t recognize that it is a new situation… when you look at everything exactly the same way as before? Then you are stuck.

What the sideways view can teach you…

Homo Sapiens look through their own eyes… and are stuck with the view. 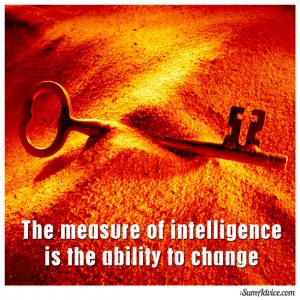 Stuck view means: stuck reaction, stuck attitude, the inability to learn the lesson from both successful and unsuccessful actions, from the results.

And this is the current state of humanity: homo sapiens. Hasn’t moved higher in tens of thousands of years…

One would think that this is what nature meant for you to be… but it is not so.

Nature, Life has been trying to teach you lessons, but you are not willing to learn. Or not able…

Almost all my students are stuck there… stuck with the complaint and the resulting behavior: they have been unwilling to learn the lesson.

As long as you recall the incident always the same way, always looking through your victim eyes, nothing will every change… This is just how it is…

As long as you don’t change what you see… you remain that little kid who was offended, felt like a victim, and remained a victim.

Once you are stuck with one self-righteous view, you’ll build on it more of the same, to justify your victim stance…

I did. You did. This is the culture of homo sapiens. Not learning from the plentiful lessons Life, society, offers.

The Playground, a program I have been developing for 32 years, is designed to take homo sapiens to human being level of evolution.

Why? Because it interests me. Because it is in line with “you are either growing, both as an individual and as a species, or you are dying.” And because Life wants more life… neither stagnation, nor less life… MORE LIFE.

Almost everything Life wants of you is counter intuitive… What we, homo sapiens, call intuition is not intuition at all, it is what our thinking gives us… the mind.

Homo sapiens means, translated to English: wise man… and according to my own view of the species: it really means: thinking man: a species that lives through the mind… not in the present moment. Through some wisdom from the past… which is, is proven not very wise indeed.

Even if it was true when the first person who said that said that, truth repeated is a lie.

Some principles, like “truth repeated is a lie” can stay truth in someone’s mouth who has no idea what they are saying, because it is a principle. But 99% of what you repeat, what you read, what you learn is not a principle… and is already a lie…

No intent to lie is needed to be a liar… it comes part and parcel with being a homo sapiens… a repeating meaning machine.

And truth telling is part of integrity: if you keep repeating lies, you are a liar yourself.

Yesterday a “Starting Point Measurement” client argued about their integrity… while everything she does for a living is talk lies… Untruth. Tree of Knowledge b.s. just like almost all self-improvement, spirituality teacher.

The average integrity, currently, on the planet is 1%. Meaning: 99% of what people do is not in integrity.

Now, as I said the Playground is designed to take participants past this barrier, by changing how they look at life.

In the Playground you are asked to overhaul your whole existence, including your diet, your relationships, your attitude, your whole life.

And most likely, it is not for you.

A new group is starting today… so this is not really a sales letter… Unless you have been sitting on the fence about the playground for a long time, I am not even willing to talk to you about joining the group.

If you are, on the other hand, have been sitting on that uncomfortable fence…

Please accept me into the Playground
You need your Starting Point Measurements for me to decide if I take you or not.

PS: When you want to know how intelligent is someone: look at their behavior when they get feedback, coaching, or some other hint that they didn’t do as well as possible… because the measure of intelligence is the ability and the willingness to change.

Some soulcorrections focus on avoiding domination, and therefore they never act on a feedback: they are utterly and miserably un-intelligent.