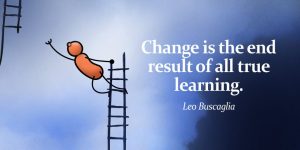 Change is the end result of all true learning ~ Leo Buscaglia

I found this site, Quotation Celebration, by accident.

And, unusual for me, I signed up to the notification list.

This quote came in today’s email.

It is the perfect quote for where my students are at: unless there is a change, nothing has happened. You got some mind candy, some insights, maybe some new rules to resist, but it is all useless.

The goal of life is to become the most and best you can become… and that comes with changes.

Change doesn’t say there is something wrong with you, even if you have been sure that that is what it means. I used to think that… I have written about it… when I thought that when it says on a product label “new and improved” it meant that it was no good.

I don’t remember when I changed my mind, but thank god I did…

If you look what my courses, my articles, my products are about, they are all about causing change.

We could see that my “job” could be called “Change Agent”… but of those, there are countless of those… They try to change the world, the circumstances, other people, the culture.

So in that regard, I am not a change agent…

In the last 24 hours I had an insight. I forgot what triggered it, maybe it was a comment? I can’t remember.

But I saw something that I used to know, but forgot.

What allows someone to change their behavior, their attitude, is a future… a future that is impossible with how they are now.

And that future has to be attractive enough.

I am most motivated by who I don’t want to be… but if I really look, I have a future, a vision of a future, I just don’t talk about it.

It is very difficult to invent a future that is attractive enough, strong enough, to keep me going.

Finally, after three years of having no downstairs neighbor, the apartment there is occupied by some relative of the landlord.

So the landlord came around and granted all my privileges (granted in my lease!) to the relative… and I have a strong emotion about it: hate, anger, resistance.

In spite of the recent adjustment of my predatory genes, from zero to three, I am still not confident that I am able to stand toe to toe with my landlord, who has 10 predatory genes, and considers me with extreme condescension, contempt, and superiority.

I am afraid of her… just like I was afraid of my mother, or any woman in power.

I have not been thinking of changing into someone stronger, instead I am thinking of sneaky revenge, and moving to someplace where she is not. Just like 34 years ago I moved to another country to get away from my mother… Weakling… that is me.

So if I considered that I want to change, that I want to become this proud, strong, resilient woman who YOU think I am, who I probably could be but am not, I would have to learn something…

And how would you know that I learned it?

The quote says: You would see the change. Not in what I think… but in what I’d do… who I’d be, what I’d have.

In the What’s the truth about you workshop I ran twice this past week, that is the goal. To cause you to change what you do, who you’d be, what you’ll have. So my job in that workshop is to help people get to a place where they can see who they could be… and allow that future to change them. 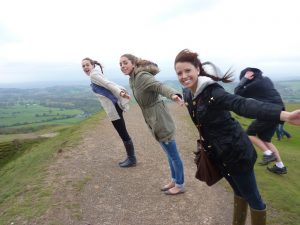 How does the future change you, you ask?

The future is like a strong wind… you need to lean into it to get to it.

In that regard, the future gives you the be, do, and have of your present moment.

If it doesn’t, then it wasn’t strong enough. The wind…

And if it is not strong enough, it will leave you with insights, and a lot of talk… but no change.

PS: As a teacher of sorts, I endeavor to become all I can become, if that is what I ask of you. tough, if you ask me. If it isn’t tough, you haven’t started your journey yet.

There are many people, including Leo Buscaglia, whose soul correction is “Sharing the Flame”, who don’t live inside and out, what they say they are about. But that does not make the quote not true… You can have a possibility, a wind, a future you walk into, and never succeed… and yet, walking into that wind is what gives you your life.

Some decades ago I invented for myself a future as a defiant answer to someone who suggested that I was never going to amount to much. I worded that future like this: “There is no way I am going to be ANYTHING LESS than magnificent.”

Now, have I ever fulfilled that future? Hell no. I haven’t. If a future can be fulfilled, then it is not big enough.

So I have been living my life in falling short… and yet, I am happier than I would be had I invented something that is inside the realm of possibility…

There is no such thing as magnificent… The horizon recedes as you are going closer to it.

There is no arriving. But even to continue the journey, you have to change… or you are lying…

Meaning: they didn’t, they haven’t learned what they so boastfully claimed that they have.

Because only permanent change counts.