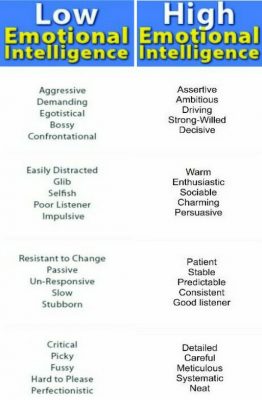 Emotional Intelligence is a buzz word, an expression, that no one explains, and yet, everyone pretends that they know what they are talking about.

No such THING as emotional intelligence… it is made up.

And yet: some people maneuver life better than others, have less upsets, upheavals, self-hate, than others.

They take obstacles differently than others. They are OK with themselves, and they don’t worry about what other people think about them. They are not attention, approval, drama seekers. They just do what they do… and let others do what others do.

We call those people emotionally intelligent.

I guess you are reading this article because you are not like that. 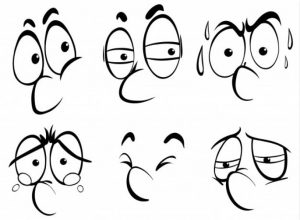 In this article I mention Partner calls… Let me explain: they are part of my program, The Playground, where participants pair up and have a call every week, 50-90 minutes long, going over a few upsetting, unsettling incidents in their lives, following a script.

But whatever I am saying here applies to you even if you are not in the Playground. Actually, the Playground is not for everybody…

The source is always

Why you need a coach

I have the good fortune to listen to all the partner calls… 236 just this year, if my count is accurate.

What am I seeing?

Unless you see reality, see yourself accurately, unless you manage to bring emotional intelligence to your partner call, the call will not get the desired result.

What is the desired result?

The goal is to get you free and clear. Innocent. Without the past influencing you in how you see the present.

Why is this important?

Just like in the cartoon Peanuts, where Lucy tells her manager: I thought I had it, but then the past got into my eyes…

Unresolved means: you still have drama there… or lying… or misidentifying what actually happened.

Then the past gets into your eyes, and suddenly the current happening becomes an incident, and you are on your way to misery… anger… feeling slighted… etc. really in the blink of an eye.

Everyone has past incidents.

Even I have a few, even after having been in this work for nearly 40 years. Incidents that were too painful before to deal with… like my parents dying, and such.

So I have my own Partner calls now, and this past Sunday I managed to tackle some painful unfinished business from the past.

Your social conditioning often stops you from even looking at the incident or finding the original, earliest similar incident, where you may not have even been there.

One of my students has a father who used to train dogs… and was cruel with the dogs when they weren’t doing what they were asked to do.

My student was just an observer, but whatever and whenever he was supposed to do something, he was, in his mind, that dog who was cruelly punished…

He is lucky he didn’t become a cruel person himself: I have known of serial killers who grew up with similar influences… He is lucky, we are all lucky…

It’s taken him 14 months to tell the story on his father… Until you get to the incident that made you who you are today… no one can help you to get clear and free. Innocent again.

The question is: do you know enough to judge accurately, assess accurately, what is really happening in the incident from the sideline.

Some of you: yes and I doubt you are reading this post. Most of you: probably not. Especially not your own emotionally loaded incidents.

You are probably looking at other people the same way as you look at yourself, with the same narrow judgment.

These are just from the two partner calls from yesterday and today.

Most humans have no idea what emotions trigger their decisions, what moves their puppet on a string strings jerk you into… and unless and until they do, they cannot become free of those triggers.

One tool I’ve been having in my arsenal is the Predatory Genes Adjustment… Having too many or too few predatory genes effect your behavior and pull on your strings.

Dear Sophie, I am feeling so much better after having the reduction of p.genes from 10 to 3.
Things that bothered me before, petty things, just do not any more. I feel better, in a subtle but very real way. Thank you for the truth and insight.
Helen

As my longtime client wrote who also asked me to adjust her two sons and husband’s predatory genes:

apologies for taking a while in getting back to you. It’s been an interesting couple of weeks; ever so subtle, yet almost earth shattering!

I’ll start with my son

The first day after the predatory gene adjustment, he came back from school and declared to me “Look I’m standing straight again”. For about two years he had been hanging his head really low, and me often giving out and warning him that he’ll have major problems if he doesn’t take care of his posture.. And just like that! I feel like crying, I’m so happy about that alone!

On the third day, I spied him teaching his younger brother how to throw a fly fishing rod on the front lawn. They went on happily for a good 10 minutes and it was only the rain that drove them in. The big deal with this is that I can’t right now remember my son ever teaching his brother anything at all like that.. really quite unlike him.

And even more so because it was about fishing, his most current passion that he would quite happily keep completely to himself. His little brother often copies him and wants to do exactly what he does, and nothing has annoyed him more. He has actually said it many times “can’t fishing be just for me and can’t he do something else?”.. So you can imagine how gobsmacked I was observing them on the lawn that day!

And lastly, just this morning I had denied their access to computer as a consequence to some behavior.. my older son immediately protested and got angry. I kept ignoring his rants and raves until he started actually trying to cry. I told him that this most definitely wasn’t the way to get things, and soon he went quiet for a while. Then he tentatively asked if there was something he could do to get his access back, to which I replied “I don’t know…maybe”. So he got up and, after a half an hour I found out, he did all this; cleaned the kitchen, picked toys and rubbish in the living area, emptied the ashes from the stove, brought the compost out, picked up all the clothes off the floor, cooked breakfast for himself and his siblings AND, hear this, the dog had pooped on the floor and he cleaned it?! I mean.. WHAT?? Never on earth could I have got him to do that before! ? Brilliant!

Well he’s been in pretty good mood in general. He still has wet the bed about 4 times or so. We talked about if he was interested doing the course a couple of times. The first time he just listened and said nothing. This morning I brought it up again, just explaining a little more what it is about.. he reckoned he hadn’t had anything “bad” to happen in his life yet, so I told him a little about my first couple of incidents, after which he immediately told me about something that happened when he was 3 or 4 in the creche and I hadn’t known about.. Well he sort of shrugged it then, although he’s not downright saying no either.

Ok.. a long email.. well my story is a bit shorter, I think.. (I won’t copy her story here… it is too personal… sorry)

So the predatory gene adjustment is a method that works, but there is still a long distance between changing genetically to changing consciously… especially if you don’t know what needs to change.

My Playground is, so far, the most effective way to learn what pulls the strings, what triggers you… and, of course, the program is not complete.

I have recently read the book The Art of Hunting Humans.

I have given a copy of it to my Playground participants… because it has a lot of the stuff I haven’t known myself, stuff that is important. I cannot personally teach everything… especially not until I become so good at it that I can teach it… The book contains principles I have never contemplated, and so I am a beginner in them… therefore I am not ready to teach them. yet.

I have found that spending all that time listening to one thing doesn’t mean I cannot also listen to the Big Bundle at the same time… My secret weapon.

I am working on getting young again, so I cannot jeopardize it for a whole 6-7 hours…. lol.

So I’ve embedded the Big Bundle in the recording. This new audio serves two purposes: while I listen to the book, I also have the Big Bundle to keep my consciousness awake, so I don’t listen with my minds. I’ve noticed that my mind doesn’t wonder as much… and I get a whole lot more out of the book than when I tried it without the Big Bundle.

To my dismay, my students don’t listen to the book… or not fully …or not at all. I only know three of them who have obviously read the book or listened to it, because I can hear it in their Partner Calls.

If you have the Big Bundle, and would like to get a copy of the audio (6 and half hours long) please download it and listen to it… a few times. I am on my third listening, and my hunch is that I will need more than three times.

Understanding is the booby prize. You want to listen for recognition of your own and other people’s behavior. Priceless.

If you already have the Big Bundle, the combined audio is already in your account, just look at the sidebar… the same site where the Big Bundle is… The activators’ site.

And if you don’t have the Big Bundle: what are you waiting for?

You want a special deal? 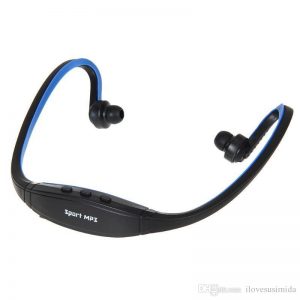 I have 10 sport mp3 headsets… and because the player doesn’t remember where you stopped the listening, I chopped up the original six and a half hour audio to 20 files. That is what I’ll put on the chip with the sport mp3 headsets… when you buy the Big Bundle…

I only have 10 headsets in stock. If I run out, you’ll have to wait for your headset.

Order this deal before Sunday, November 3.

Go get the Big Bundle

If you already have the Big Bundle but want a headset with the audio, there is a buy button on the page of the combined audio…

3 thoughts on “Emotional Intelligence and your experience of life”