And why do you need teachers?

But no one teaches you how to let go, how to become free… again.

Most soul corrections, in fact the whole of humanity, with rare exceptions, spend their lifetime compensating for some inane incident that a more intelligent species would have shaken off… no big deal.

But not the Bandar-log, the just out of the monkey evolutionary phase homo sapiens… no, they are not intelligent enough. Even monkeys are more intelligent… don’t be offended, I’ll explain.

No, homo sapiens finds its excuse for not becoming all they can be, for abusing themselves and others, in their rear view mirrors.

Where they see abuse, slights, no power, injustice, embarrassment, fear, hurt, powerlessness, no acceptance, what have you… and…

they are intentionally, willfully, re-creating the same thing in their lives…

My version was trying to fix it.

It was as if the sun came out for the first time.

I remember driving on the Garden State Parkway (NJ) and I saw sky, trees, for the first time. The very first time.

Suddenly I didn’t need to concern myself, 100%, with the road, with what I was thinking, being in my head: my cone of vision suddenly opened up, and I could see the whole world. It didn’t last long, a few days, but I knew it was significant.

I knew that I saw the future, and the future was beautiful and worth working towards.

What happened before that trip down on the Garden State Parkway is that I got a glimpse of, for a fleeting moment, that there was nothing wrong, what happened wasn’t wrong, I wasn’t a failure, and therefore the future was open. Wide open.

This was in 1987. This was already my second such glimpse into reality. The first one was two years earlier.

Fast forward to today, 2019, I am now free. There is nothing in my rear view mirror worth looking at, and therefore the future can be so good, it is even surprising.

One of the things that strikes me, still, as unbelievable, is that things that were wholly impossible, not even worth dreaming about, are “threatening” to become reality. Threatening, I say, because they are in promise form… but previously, until just now, they didn’t even live as a promise… So something is happening, and this is what this article is about.

Turned out that I did not double bill her… But I looked at her whole history with me, and I saw that she suspects being slighted all day, all night, 24/7, and she is ready to lash out when the suspicion looks justified.

Driving with her attention wholly at the rear view mirror. 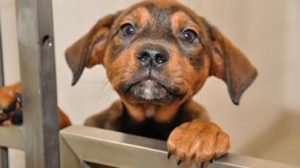 Here is the story: Kicked, beaten abandoned as a pup

If you think you have insurmountable problems and the world is closing in on you, let me tell you about a dog named William.

PS. Try not to let your past hold you back any longer. And when it does, just think of William.

Really. A dog named William is way ahead of you, kid. He is happy, because he isn’t looking in his rear view mirror to find out what’s going on… He is looking at where he is at.

No. He looks into the present, and the present is always interesting.

Learn from William. He is a better teacher to you than most of your past.

Because there was nothing ever wrong in your past, and none of it can be fixed anyway. It was what it was. Today is a new day…

Of course, homo sapiens need to learn to tell wrong from what happened. Reality from story. And that is what the Playground is about. Learning to tell the difference. So you can be like William. A happy being.

The Playground is a program, and I am very selective of who I allow into it… After all I want to enjoy spending time with you for me to have any self-respect.

Go check out the Playgrond
I pick and choose who I accept… If I don’t pick you, you get 100% refund, promptly.