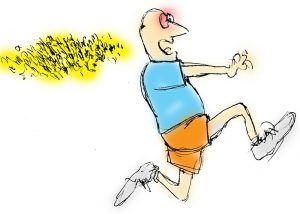 I made the HOE, the combination of all the Heaven on Earth energies some seven years ago. HOE, the word, I knew then, would make sense some day.

But why hoe? I’ll explain in a minute.

Some good ideas are still good ideas after a week… this one, combining the Big bundle and the HOE wasn’t such a bright idea…

Ever since I started to use the Big Bundle with HOE, I am sleeping worse. So much so, that I stopped listening to the audio on the headphones while sleeping. But I had it on the mini speaker in the bedroom… and although the Big Bundle is not very effective if it is played in the background, it still made me notice how busy my mind was, how much I dreamed, how much of my night I spent in thinking, or maybe having thoughts.

Then last night, I was sleeping plus… meaning I was sleeping while consciousness was diagnosing one of my students, that he never does anything unless it is a reaction. No matter that this way his life isn’t going anywhere. Then still sleeping, I tried to figure out which Bach Energy it was… And then it dawned on me, that this whole mischief is caused by the combination of the Big Bundle and the HOE: the Big Bundle tells Consciousness to wake up the brain to what’s going on, and at the same time the HOE is a potent homeopathic principle based energy medicine: putting what’s going on, emotionally, habitually, thinkingwise, on steroids… so it is unmistakable.

Homeopathic means cure something with just like it. A lot of ancient healing methods are based on that principle. You don’t need to know the cause, you observe the symptoms, and find something that causes the same symptoms, give the suffering person a little bit of that, and the two things battle it out. If you live, you live. If you die you die.

So when you give, say Agrimony to a person who is cheerful while they have all the reason to be sad, they’ll get conscious to how inauthentic and fake their cheerfulness is, and how much they use it to not have to deal with the real issues… the issues they need to deal with if they want a better life.

This new version of the Big Bundle has created the perfect storm.

The environment where, if you pay attention, you can see the next Bach Flower hiding under the current one, the top one, under the obvious one.

The Bach Energy, the one I struggled with all my life, is the White Chestnut… the busy mind. I have been an insomniac all my life…

For example, the student whom Consciousness was analyzing in my sleep: it is Rock Water: dogmatic discipline, self flagellation. How do I know? I just muscle tested it.

I asked the question: what is right under the top layer, which is, for him, as I have measured earlier in the week “no matter what I do nothing is going to change. No matter what I do is lying to get away with not doing, not giving, with stinginess. A big middle finger to the world. I won’t give you wood, even if you give me heat. haha.

Our iniquities, faults, our character defects form an underwater iceberg.

Your Bach Profile shows the visible part… not the seed level. The people I have measured all have a visible Bach Profile of “no matter what I do”, except two of them had impatience, and one the toxic Yew: the middle finger.

You can go through your whole life having those attitudes and not know that that is your base attitude for life. Even though you live your life that “no matter what you do, nothing is going to change…” The two impatience people are both business owners, while the rest are employees… neither of them knew they were impatient. If you look, it is nearly impossible to imagine a person who started and runs a business with the “no matter what I do” attitude that makes one avoid taking any constructive step, any constructive action in their life.

Yesterday I chatted with another student, who wrote:

“This week I am all over the place with the new big bundle, even now as I write this, I feel unwell, confused a bit sick and tired and not sleeping well. I feel like I have a head cold

I know my awareness about the way I have been acting in my life is very different now and I can see so much more.

Also, I have been practicing being humble around people and I can see they are being nicer to me.

I know since I have been using the big bundle, I have become fearful of you. I have become afraid of you and I was not before I started using it.”

His top layer is: “no matter what I do”… but to see more, why he was suffering more than the other students, I looked what is the next layer, the first invisible layer that is hidden under the top, and it’s Agrimony: pretending to be cheerful. Typical mask for his soul correction. The cheerfulness prevents him from looking at himself where he may see something he doesn’t like, and the cheerfulness hides the bad stuff from himself, so he doesn’t have to take responsibility for it. It hides hate, hurt, anger, vengeance, some nasty stuff.

In many cases, Agrimony is not only cheerful, it also appears to be generous. It is also a pretense… no real generosity there: there is an “in order to” component, a hidden agenda.

His soul correction is “Removing Hatred”.

I have a disproportionate number of people of his soul correction in my life: I am going to have to look at why that is.

Now, other than it is interesting to learn about other people, why would you, why should you be interested?

Especially because when these layers are revealed to consciousness, you have to experience unpleasant states, like this dude, or like myself. Or another student, who feels the flu is coming on… Or my headaches… didn’t I mention that?

Yeah, headaches. All that thinking… lol. Or who knows why.

I didn’t have a headache before this for 10 years…

Most people want enlightenment, high vibration without ever considering that what it takes is staring the bad stuff about yourself square in the eye… and owning it.

You don’t have to change it. You just have to own it.

It’s not wrong, and you don’t have to fix it. If you like hating, being angry, feeling slighted, feeling puny, feeling powerless, feeling like a victim, then please be my guest… but tell the truth about it. To yourself. I already know it about you.