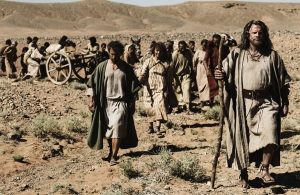 Kabbalists say: the bible is code. They, of course, mean: the Old Testament, the 5 books of Moses.

If the Bible is code, then it is not a story… or if there is a story there, it is itself code: meaning an illustration of a principle.

Egypt stands for slavery. Slavery to whatever people are a slave to: riches, significance, sex, entertainment, desire to receive for the self alone, their racket, the racket with which they extort goodies from others, justify their nastiness, their domination, their haplessness.

Extorting sympathy, or whatever they extort.

So what did Moses do with this bunch of slaves?

He made them march around in the desert for 40 years. None of the original slaves remained alive. One would think 40 years were enough… but no. Even the little ones were more concerned with what they didn’t have (the sign of having a racket!) than with the vision and the idea of The Promised Land.

And then Moses, himself wasn’t allowed into Canaan…

Or take the incident in the Bible of Moses going up the mountain to get the Word of God, but it took too long for the people! So they built a golden calf, and started to worship it.

Moses came down with the tablets he put the Word of God, but found the people already turned away admiring the golden calf.

He broke the tablets…

This serves as a cautionary tale for the teacher whose students find other things to admire, want to follow, pine after… It’s all in a day’s work… ahem.

So the story of Moses and the Israelites is a cautionary tale for any leader who wants to lead slaves to freedom.

It tells the leader that slavery is in the genes, not in the memory of the people. Obviously this is MY interpretation, given that I can, with Source’s help, that I have been able to manipulate your genes: open up capacities, adjust your predatory genes, create audios that talk directly to your genes.

We are, in the Playground, the program that is like the 40 year march in the desert was for Moses, we are on the last leg of the process. The elimination of the slavery genes.

But it didn’t work for Moses, did it?

If we look at the story, it didn’t quite turn out to be the fairy tale as it was supposed to, did it?

If it had, the bible would have stopped there… but it didn’t…

Why? Because the genes, the altered genes, left alone, without new stuff to learn, the genes turn back to how they were before.

My favorite non-bible based story to illustrate how this works is this:

You decide to get new furniture for your living room and your dining room.

You drag the old furniture to the curb for the trash collectors, and you feel really great about it. New furniture new you new life.

But when evening rolls around you want to sit down and eat your dinner, so you sneak out to the curb and bring in the chairs and the dinner table… and then you want to watch television, so you bring in the sofa and the armchairs…

And you end up where you were, maybe a little tired.

So unless the new furniture is delivered even before the old is discarded, you’ll end up not needing it.

But how do you do it?

Motivational speakers, the vision board masters, the mind movie nuts, are masterful at this part of the story… and wholly and completely incompetent, not even interested in taking the old furniture out to the curb.

They lay it on thick with the dream, the fantasy, the imagination, leading people to experience and love the future they cannot create with the genes they have… other than in their minds.

Result: the infamous desire trap… It is all laid out, this is where this new furniture goes… and this is how we’ll enjoy watching television… but no new furniture, just the idea… the old furniture is still there.

The mind is a funny thing: it makes what it envisions more important and more real than reality. And therefore, desire-trapped people never make the effort to bring their desire into reality.

The world of slavery, the world we live in, has thousand and one ways to keep you in bondage, tethered to the impotent desires, caged in the desire trap.

I have one student whose biggest contribution to this work we do is his unparalleled tendency to fall into the desire trap AND climb out of it.

The story (by Portia Nelson) they teach in all the 12 step programs is a great illustration of how this goes:

© 1977 Portia Nelson, There’s a Hole in My Sidewalk: The Romance of Self-Discovery

Whether you know it or not, that story is about you… and you are most likely in chapter one of that story. You live in that hole in the sidewalk, and you have wallpapered it, you have made it your home.

My students in the Playground live in different chapters, some, the student I have mentioned before, is in chapter three, ready to move to chapter four.

But the big question is: what about chapter six? What will be your life about?

What is the future that makes it worthwhile to be walking free and unrestrained, without your favorite hole in the sidewalk?

Is that future inspiring enough for you to work towards it? Make that future your new home?

The webinar I promised to the buyers of the 53 invisibles course, back in the beginning of December was a webinar workshop where we would do two things:

I am going to republish those articles, one a day… Read them. They are going to prepare you for the webinar.

The webinar is only for people who bought the 53 invisibles course.

If it is necessary, we’ll do more than one webinar.

By the way, participating in the What’s the truth about you? What’s missing free workshop is a great preparation for this new webinar… In fact, I’ll make it mandatory… That’s a thought!