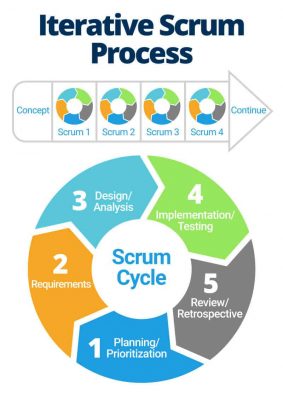 Thinking of life as an iterative game changes how you play it… Life. Positioning yourself for the future carries more weight than ‘winning’ in the moment.

I read that yesterday, and it immediately clicked with me…

My methodology, my approach to life, to work, to transformation, to everything, is iterative.

Even in architecture: I was attracted to iterative design… the growing house… starting with just a tiny house that was designed with the big house in mind.

Iterative means: I start with an incomplete execution of an idea… and I improve on it after lots of testing, and go through this cycle several times.

Can you do the same? Yes… if you use the iterative approach, game designers use a lot.

Iterative game design is the process by which a video game is repeatedly proposed, prototyped, play tested and reevaluated prior to working product release. Iterative game design operates on the following principle: It is unrealistic to create an ideal product on the first try.

I design processes, programs, courses, methodologies, energies, not games, but the process is the same. Software developers use the same.

The concept of the minimum acceptable product comes from iterative thinking.

In fact the process of building a successful life, successful in every area of life, is iterative. Health, relationships, work, money, procreation (children)… everywhere.

The iterative method is not additive. The masses either think that you can jump all the way to the top, that you have  Pallas Athene jump out of your brain in all armor and power… or alternatively you grow something, linearly, add to it a little bit when you can.

Neither methods work. The iterative method is counter-intuitive in that at the start of each iterative cycle, after the test drive, you tear it down again, to almost nothing, and build it from scratch.

A software company that never practiced that because its owner is not intelligent enough, is Microsoft. The office is a bloated behemoth… building documents that are also bloated.

I even use iterative cycles in my expanding certain capacities with Freecell… pattern recognition, controlling my attention, widening my cone of vision, seeing the future as if it were here…

Instead of always starting a new game when I lost… I play that same game again… to see what I missed, what I can learn from it.

here is a video that explains how iterative process works

The other approach, the approach of the 99% is trying for a home run every time.

Obviously there are a whole lot in the middle… people who want home run but get discouraged and don’t go for it any more… they have given up. But their attitude remains the ‘going for the home run’, regardless.

What is the reason the 99%-ers, the not-successful life people, want to hit a home run out of the gate… every time, is their precious ‘I’…

Your precious ‘I’ fancies yourself better, way better than you are. Moreover, the precious ‘I’ tells you that unless you are treated as that inflated view of yourself, everyone is wrong.

And also, unless you can and do hit a home run out of the gate, the thing isn’t worth doing.

Your precious ‘I’ doesn’t want you to be just a normal human… making efforts, gaining ground, to become anything.

Becoming is hard work. And slow.

If you are in a hurry at any phase: you’ll fail. you’ll produce something that won’t fly. Won’t hunt. Won’t do what you wanted it to do.

And someone, or the culture is somehow suggests that you can take shortcuts, that you can jump, that you are special and therefore you can get all there is to get from, let’s say, a phone call, webinar, book, that there is to get… no need to buckle down and listen again, take notes, and take some actions on what you learned.

I got a new insight about the ‘Bach energy’ of ‘no matter what I do’ yesterday.

When your dominant Bach energy in your Bach profile is ‘No matter what I do’ then what I wrote above describes you to a T.

In my work everything, every single thing has to be done iteratively.

I first connected to Source back in 2007. It took me four years to be connected long enough to consider it useful.

There is a big gap between getting connected and doing things while connected. To be able to take the attention off the connection, and do something and trust that you are connected… that the connection stayed on.

None of my students can stay connected. Why? Because they don’t practice consistently… they don’t use the iterative method.

So unless you have the willingness to produce a little results and little more result tomorrow, and you do this every day, you can get to home run looking results… at the point when what you are producing is finally good.

if you are a 99%-er, you won’t… Because any result worth producing takes the process of bad–>bad–?little-better but still bad—>maybe somewhat better and not as bad any more—>maybe has some hope—>semi-rotten—>you can attempt to sell it and be prepared to issue a lot of refunds… etc. etc. etc.

Every student and client I deal with is a 99%-er. Why? the 1%-er are busy producing.

Could they not use my services? Yes they could, but they don’t know it exists.

When you talk to a 1%-er, they know they could grow, but they don’t know how. Ultimately they are too busy producing…

Recently I wrote an email to my teacher/mentor, who I have never spoken to, and of who I am very afraid of. I never sent it. I wrote it and it is still saved… and not sent.

He has expressed dislike, distaste for people who deal with the intangibles as I do.

And add to intangibles me being an empath and therefore seeing what is invisible to him… that his business partner will take him for a ride, unless he makes a legally binding and better contract between them.

He, my teacher, is busy producing, and hopes that other people will hold their own in his dealings… which are not many.

He is a lone ranger, and as a lone ranger hasn’t sharpened his observation skills enough to hear/sense bad vibes, bad intention, intention to use him, etc.

Maybe. 1% or the 99%-ers is willing to change its spots… as in the leopard and its spots.

On student is showing signs that he may be one who will, eventually, become a producer.

Because to become a producer, you have to act on your own ideas, and iteratively need to bring them to reality.

To find out where you are at in this regard, and what is missing for you to become a producer, a 1%-er, I recommend that you get your Bach Profile measured…

Go to step 2
There are 42 Bach energies, 38 from Edward Bach, 4 from me. The energies are bundled in the Heaven on Earth, that comes both as a remedy or an audio that can be infused in water.

The Bach profile is measured and sent to you through email as an attached jpg file.

PS: In mathematics, at least in Hungary when I went to university, around 1966… the process was called ‘successive approximation’.

When I look, it is almost exactly the same as the Anna Karenina method… you lose what isn’t good… and you are left with the good… exactly.