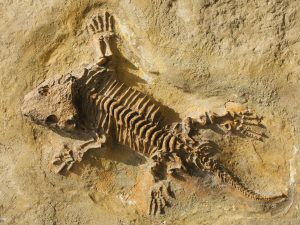 Whether Darwin said that anything like that, or he didn’t… doesn’t concern me. The principle is true, whether a famous person said it or not.

This is true both in the micro and in the macro. Both for a nation, an ethnic group, a species… or a person, a family, a company.

In my work with people I attempt to cause an evolutionary shift, almost as significant as the first fish that walked out to dry land.

Evolutionary shift? Yes. It is not just change, it is not just adjustment, good advice, things to remember, but it is to become a whole new species: human being.

How is it going?

I have no idea… My job is to cause something that normally, if the conditions are right, would happen in more than a billion years…

So the job is to do it now: do an accelerated ‘course’…

Like the 4-minute mile… when it was broken, within weeks a slew of people, hundreds? broke it… And before it was broken it seemed like a glass ceiling: unbreakable.

So is, really, with this evolutionary shift.

And the whole world argues against the opposite.

Is it likely? No. Is it possible? yes.

I discover new things to say daily… by what i see that I hadn’t seen before.

So what does this ‘being adaptable’ mean in terms of this evolutionary step?

Well, I can’t imagine what it took for a fish to start breathing through a lung… but in essence, most of it was physical.

To go from home sapiens to human being, most if not all the changes need to take place inside, on the level of thinking, looking and attitude.

The attitudes are hard to change, especially if a person is

1. is intellectually slothful
2. has a narrow cone of vision
3. has an inability to connect the dots
4. has a low level of intellect… low level of thinking ability
5. has low level of controlling the attention

One of the most important differences between the two levels of human evolution is how the individual relates to others and to Life.

In essence, boiled down to the smallest molecule of change, homo sapiens’ fundamental seed level is based on ‘or‘ while human being’s seed level is ‘and‘.

Unfortunately slogans don’t do sh*t… Singing: we are one… ahem. horse kaka

It is an ‘and’ capacity, and literally not available for homo sapiens.

The rule of homo sapiens: I want you to do well, but not better than me.

Said in another way: homo sapiens live in a world of scarcity dreaming of abundance only for themselves. Even real sharing is nonexistent.

So, as you can see, my work is cut out for me. And you: if you choose to participate in this ‘grand experiment’.

I have a Playground that has been ongoing for 20 months, and I don’t see that I have the energy to start a new one. The participants are still working through what they need to work through.

I am starting a series of workshops, 3-4 hour long events, later today, where we’ll take a slightly different approach to penetrate the invisible layers to get to the seed level and see if we can change that.

Unless the seed level changes, nothing above it can change.

For example, unless you change the seed level of a pear tree, it will remain a pear tree, no matter how many things you change, the soil, the fertilizer, hybridizing, splicing in another species… the tree is still a pear tree.

So the change needs to be on the seed level, on the level of the DNA… not by gene manipulation, but by using epigenetic shifts to change it.

As you go through the work of confronting your ‘desire to receive for the self alone’ in your life, your cowardice, your avoiding nature, your entitlement, your neediness, you open up, by virtue of epigenetic shifts spiritual capacities, that alter your seed level.

I just listened to two participants working through two incidents each, and double-checked if they have really opened up capacities, as I say. They have.

Now, capacities are tricky. Unless these participants make their behavior needing those opened up capacities, those same capacities WILL close.

This is the reason this process takes so long: between the sessions participants don’t set themselves up to ‘need’ those new capacities, so the capacities turn off.

In my previous life, when I was a Landmark participant, the coaching we ultimately got from the leaders was to put our life into the seminar or course we were taking, not the other way around.

The other way is to try to wedge, to take time, to engage with the seminar or course when you have time.

When you set the seminar as the largest container that your life is, everything that occurs inside that life is because of the seminar, inside the context of the seminar, and the likelihood that the insights become breakthroughs, that the capacities that open up stay open doubles…

It is an uncomfortable concept for most people. They feel they would have to surrender their autonomy to the seminar, or to me. And their either-or seed level kicks in, and there goes their transformation.

The people who have been unsuccessful at my courses all demonstrate this unwillingness, this scarcity mentality.

If you are like that, this will be your number one barrier to enter ‘the kingdom of heaven’ so to say.

If doing work with me is a power-struggle for you, you may very well stop now: it is not going to work.

You can still register in today’s workshop. The What’s the Truth About You workshop is today at 4 pm EDT, that in New York time.

It’s our first, but I estimate it will take 3-4 hours to get the results I need you to get.

You can buy one session, or you can buy three. If you buy three, you get it at 30% discount. That option is in the ‘upsell’.