A few weeks ago I had an idea to pair two of my Playground participants to do a project that would benefit them both.

One is a skilled and prolific ‘Idea Machine‘ who is really lousy in communication. He was writing 10 new ideas for his customers, all business owners. But he was not able to ‘sell’ the ideas, even though they were free: he did it for practice, to keep his brain in top shape, for his own reasons… to get better at it, to reduce his about-me score… lots of reasons to do things for other people that take effort.

The other has an aspiration to write letters that sell… so he can leave his menial day job.

My idea was that they could team up and one would write the ideas, the other the emails that sell the ideas.

It was a non-starter.

Each of my participants went to their usual place: one went into desire trap, imagine himself rich and powerful, a emperor. That is were he always goes. His vibration dropped, his about-me score went sky-high, and his intelligence plummeted.

The other resented the idea to do something for free. That was his ethnic, cultural bias: he won’t do anything for free… Even if he is still lousy at it and needs tons of learning, tons of practice… No… he won’t do it.

Contrast this with me: I learned everything while I was doing it for free.

I could charge, but when you charge, you are supposed to do it already well… And the pressure is tremendous. When the pressure is too high, you cannot really learn. This is one of the reasons to heed the principle “don’t try to dig a well when you are already thirsty” it won’t work. You’ll be accident, error prone… Guaranteed.

My 26 years with Landmark Education cost me tens of thousands of dollars, and approximately and about ten thousand hours of assisting.

I learned more useful things for my life in assisting, working for free, than in all the courses put together.

Assisting is taking on a job, inside the company, without pay. In return you learn the job and you are also, mostly, managed.

I could, probably, continue for a whole page telling you what I learned to do. The skills. 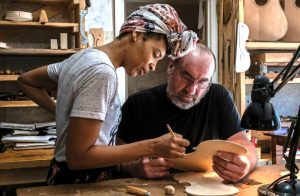 There are no schools that teach those skills. No books. No online courses. Schools, most schools teach ABOUT, but not it. Only doing will give you skills, and no one’s life is set up to do all kinds of doings that have nothing to do with their life, right now or maybe ever.

You have to go to where that skill is necessary for the work, and take that work, and pay for the learning with your time and effort…

Some people take on apprentices and get paid for it.

Because beginners muck up… waste time, materials, and the owner of a business wants to be compensated for that.

Gary Vaynerchuk, an online entrepreneur, says that people should pay him to work for him, work with him.

I am even more ‘rigid’ in this regard: I stick to my principle: if I wouldn’t do for free, I won’t do it for money…

It seems that that number, I call it the bridge, needs to be at or under 10%.

Your precious ‘I’ tells you that you are too good to do that, that you are ‘worth’ more, that you should be ‘paid’, money or respect or both… And then you end up holding the potty in the morning… I forgot the origin of that expression, it is a Jewish joke about a dreamer, fantasist, who dreams about all kinds of things, among others chocolate… but when he wakes up he find that his hand was massaging poop in the chamber pot.

Yeah, that is what the precious ‘I’ does to you…

Most things that you need to become a rounded person, to have an edge in life, to command respect and high pay, to stand out can only be learned through doing… A year here, six months there…

In today’s Talk to me webinar, we’ll attempt to turn your biggest complaint into a purpose statement.

The webinar is at 4 pm this afternoon, EDT, that is New York time. It will be, probably, about 2 hours long, maybe longer, depending on how it goes.

I prefer participants whom I know… so at the minimum, get your Starting Point Measurement in hand, know your soul correction, etc.

Register in the webinar