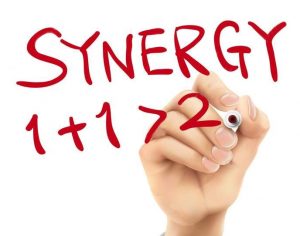 nergy is when two or more otherwise inactive or insignificant elements are combined to great effect.

A clothing outfit… each piece is just a piece of clothing, but together they look like a million bucks.

Or the heated mattress and the blanket… neither of them will stop the cold from killing you, by itself, when it’s a really really cold night, but together they keep you toasty hot.

Or tea and milk…

Once I distinguished these, I hope it will be easier to see, using your Sight capacity, to see it everywhere.

In this article I am going to show examples that are not as easy to see as the ones above.

My brother who is two years older than me, suffers from joint and muscle pain from rheumatoid arthritis, he says. My mother had that, in her hands and in her back. I assume it hurts like hell.

The pain made him more ready to listen to what his little weird sister has to say… ahem.

I have recommended the Big Bundle, and it did nothing to lessen the pain. Then I recommended to add sesame oil, morning and night, strait up, not in some food, to his regimen.

I don’t know if he is doing it. But when I muscle test, the combination of the two healing modalities can do the trick… if used, of course.

Neither one of those, by itself, can do the heavy lifting.

It’s like one person has a hard time to lift a dining table, but two can… got it?

I am lucky, I don’t have to do why it works… my hunch is that the sesame oil douses the inflammation, the heat, and then the Big Bundle can summon the body to clean the area up… Not a very scientific explanation, just my hunch… it makes sense to me.

He started to use the Source Light Energy healing of the pancreas. Now she is cancer free… Synergy at its most powerful.

One of my students is working on developing his story-writing skills… Stories, written right, sell. His copywriting skills… and his humor skills. If done right, these three skills can make him able to sell just about anything… As long as he pays attention to what stories would resonate with his audience. This is his weakest. Once he gets somewhat good at that… he’ll be on his way to make a full time living doing the things he is good at… synergistically.

When someone asks him: what’s special about you, he should say: I combine my strengths to a killer sales machine… fantastic, isn’t it? He doesn’t even have to get really good at any of those… just fairly good.

My teacher, Ben Settle, is combining his skill to write copy, his sill to know what makes his crows click, his persona he has developed as a crotchety loner, and his ability to produce at a lightening speed. And lastly his ability The Sight… to be able to see a future he is building, and not lose sight of it. Made him a millionaire, and other millionaires line up to get his advice.

One of the most important capacities, in my view, are The Sight, currently not for sale, and the ability to hold more than one thought in your brain at the same time.

When you don’t have the capacity to hold more than one thought in your mind, your mind’s view, in order to look anywhere else, you need to put it down… and guess, out of sight/out of mind… you lost the big picture.

I can turn it on for people, because it is a DNA capacity, but for now, I want people who have activated The Sight, to use it, so they learn how to keep it on. At this point half of the students that I turned it on for, have allowed it to turn off…

When I look at the people who allowed The Sight capacity to turn off, what I see there is no ambition.

And ambition is dependent on having a vision for your life, a direction, something that it is worth for you to go for.

So we could safely say: ambition, vision and context are synergistic… and ultimately give you the quality of your life. This is one of the reasons I measure it in your starting point measurements.

I call vision there inspired/inspirability… by the way.

I need to order my grocery through instacart… and the minimum purchase is 35 bucks, so I shop at one or two stores, and therefore I have to cook with what I can get. the other restrictive features are my eating style and allowed food list

Given that I am on a slimming diet, I have decided on a filling soup. I started out with salmon soup. It has yellow onions, garlic, sesame oil, pink salmon, black pepper, marjoram, salt, spinach and water… Occasionally I add a tin of sardines, without the oil it’s packed in.

None of the ingredients is special, particularly appetizing, but the combination is superb.

I have also made a version where I replaced the spinach with asparagus, and another one where instead of salmon, I used ground lamb as the protein source.

I actually manage to eat nothing else all day, and have no sense of deprivation.

If you want to follow in my footsteps, make sure you observe your eating style and your food list… or you won’t get the same benefits I get. One size doesn’t fit all.

Now, if you are having a difficulty to even seeing that you could have a great life, if your context for life is that it should be different… then maybe the first step is to get somewhat skillful at creating context.

In and by itself it won’t make much of a difference… but when you add being able to hold more than one thought, and The Sight, and the willingness to work towards something to want… the synergistic effect of the parts will gel into a powerful tool.

Learn to create a powerful context
I’ll keep it active until I get enough clients. then I shut it down.

To illustrate true ambition, check out this article
https://www.technologyreview.com/2020/06/12/1002838/avi-schiffmann-17-year-old-guide-building-pandemic-protest-tracker/