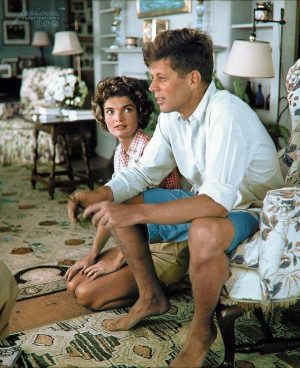 I have been in deep thought since yesterday…

“Adoration of a President-to-Be” –

Following their engagement, John F. Kennedy and Jacquelyn Bouvier went on a trip to to the Kennedy family home in Hyannis Port on Cape Cod with a reporter in tow to capture their newly engaged bliss.

An entire issue of Life Magazine was dedicated to their engagement photos. It was published on July 20 with the headline “Senator Kennedy Goes a-Courting.” It’s clear that Jackie loves John in these photos, but she later explained that her love wasn’t meant to be taken as putting him on a pedestal:

Now, I think that I should have known that he was magic all along. I did know it — but I should have guessed that it would be too much to ask to grow old with and see our children grow up together. So now, he is a legend when he would have preferred to be a man. 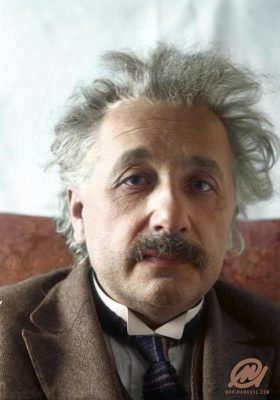 We tend to think of Albert Einstein as this vaulted genius who handed down theories and equations from on high, but he was nothing like that. Einstein didn’t see himself as God’s gift to intellect, but as an artist whose medium was science. In 1929 he told the Saturday Evening Post:

I believe in intuitions and inspirations. I sometimes feel that I am right. I do not know that I am… [but] I would have been surprised if I had been wrong… I am enough of the artist to draw freely upon my imagination. Imagination is more important than knowledge. Knowledge is limited. Imagination encircles the world.

By combining knowledge, imagination, and inspiration Einstein was able to open himself up to discoveries that many scientists and heavy thinkers would likely ignore.

We had our second session of the ‘Growth’ workshop yesterday.

Growth is all about the foundation. From WHAT you grow… not so much into what you grow into… the from what already defines that.

The seed level, or simply the seed contains all the genetic information, whether it’s a life, a project or a tree.

But nothing exists in a vacuum, even if you think of in vitro projects, like Jurassic Park… eventually they will need the agreement of environment, support, climate, soil, and in the case of a project, people.

So to no one’s surprise, the second session of the growth course was all about the people that surround you, who will be the environment of the life, the project, the diet, whatever you will birth in this course and even after that.

Now, if your guess is that this is easy peasy… you would be mistaken.

This is the hardest element of a project. Any project.

Jim Camp, the most feared negotiator ever,  wrote his famous book “No” to give away his secrets to success. One of the most important things he said there: people make decisions emotionally and then justify it with reason… and so far you have heard this a thousand times…

But what he said this meant is this: what creates the emotion, and what is your role in that. He said that you need to create a vision for your adversary, your opponent, the other person, and they will buy what you have to sell, they will agree with you, they will support you and your creation, project, diet… what you have.

So until yesterday I had no idea that people, you, can’t create a vision for another unless…

And therein lies the trouble: homo sapiens, as it turns out, ‘feels’ with their mouth… with their words, and the moment the words are there, you are not in touch with, you can’t feel the other.

People, in the course, picked a person in their lives, and endeavored creating a vision for them. One person even picked me…

The vision answers the question: what do they want?

The accuracy of those visions, the degree to which the vision is a match to the person was, on average 10%. Puny.

With a 10% matching vision you won’t create allies, you won’t create support, in fact you’ll create concept fighting concept relationships that leave both parties cold. They can be married couple, mother/child, business partners, salesman to potential buyer… no real connection.

Big learning for me.

In the course, Feel your feelings, I was teaching how to feel your own feelings… but it is clear now that it is equally important to teach to feel wordlessly, not just yourself, but the other as well.

The secret piece of the puzzle is a single DNA capacity, I call The Sight. With The Sight you can see wordlessly. You can see with your right brain, with your heart, with your own feelings.

To the degree that you live your life through words, concepts, to the same degree you are out of touch with Life, with people, and even your own self.

You can’t keep The Sight capacity active… because if and when you live through words, you don’t need it, you won’t use it.

It is not an accident that in the latest experiment, the person who uses it to the highest degree is an artist, a painter.

This is true for business, relationships, everything.

Political leaders, politicians are advised to use rhetoric to whip up the feelings of the audience, and then sell them some stuff that they don’t really need, that is probably deadly to them.

I know, I know, I am an equal opportunity observer of people.

This morning I spent some time looking at some pictures and their commentary, and picked out two for illustration of this article, to show how people are not seen as people, they are seen as a role only… through words.

Study these two pictures above and try to feel into them.

If you find it hard, then maybe you should do the ‘Feelings’ workshop and learn to get in touch with feelings, yours and others… and start living as a real human… at last.

Go to step 2
OK, and here are the two pictures and their commentaries, from https://historydaily.org/67-colorized-photos-captured-way-more-than-expected/

PS: When a guru type person, marketing guru, copywriting guru says: Message to market match, or market research, if they are good, they mean to tune into the emotional world of the potential customer… not what most people understand, the type, the role, the words. Without struggling to understand what they meant, I would have never gotten to the conclusion I have gotten… and neither will you.