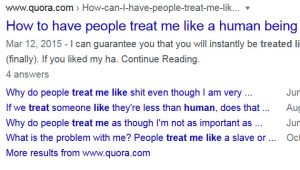 Your relationships… inside and outside… are they people, or are they cardboard cutouts?

Here is an idea most of you will be uncomfortable with:

People you have in your life are either there because 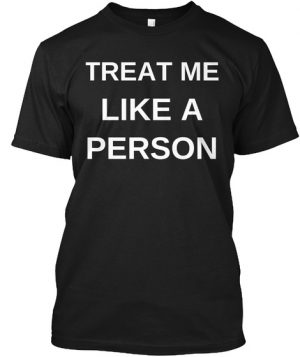 When I observe my students and my clients, they put most of their effort into pleasing, looking good for 1 and 2… and are suspicious of #3. ‘Why would anyone want me?’ And this is even true for people whose narcissistic tendency number is real high.

People, everyone, I think, misunderstand narcissists: nothing is more horrible than being torn.

I have one friend who I know face to face. I am a loner, don’t judge.

Originally I worked, diligently, on building a relationship with her, because I wanted something from her… But with time I came to like her and maybe even love her, warts and all.

Her narcissistic number is 91%. So a lot higher than my student’s. But if you watch her behavior, it swings back and forth between self-righteous indignation, ranting, being right about everything, and taking people to shop or do shopping for them during this epidemic, caring for them, keeping in touch, having a number of people depend on her kindness.

She is torn inside. 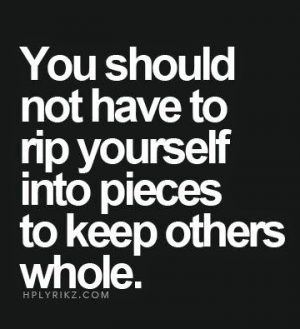 I don’t need anything from her nowadays other than the relationship, companionship, weekly chat. I genuinely like her for herself. And I not stingy letting her know what I think about her. Good and bad… We don’t agree about most things… by the way.

I think I am the only person who relates to her as a person, and not as if she were her role: helper. This includes her daughter and granddaughter… for them she is her role.

We all need people: humans are built to need people. Even loners need some people.

I had a long conversation with my landlord last night, him standing on the steps, me sitting on the steps. It was intimate. I caught that from time to time we occurred to each other not as our respective role, but as people.

Rosh Hashanah and Yom Kippur are coming, and decency comes out to play…

The cynic in me is saying that… 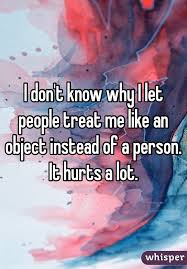 But if you’d observed our 17 year long relationship, you would say that too… he is a person who has 70% narcissistic tendencies, and he has been perpetually pissed that people don’t give him what they want, what he is due, what he deserves. So he yells. Like my mother used to. It’s taken me 17 years to overcome my fear of him.

Now, let’s turn the tables around. The people in your life want to be liked, want to be liked for who they are, not for what they do to you… and you never give it to them.

I have recently made tiny changes in my business, and I am not even consistent in that yet… it’s not automated, and sometimes I drop the ball on it… but…

The tiny change I made is in the area of #3: I acknowledge when someone makes a purchase… and let them know when to expect an answer. I don’t relate to them as a BUYER (role) but as a person.

I have seen (actually felt) them softening towards me: they experienced being treated like a person by a person. 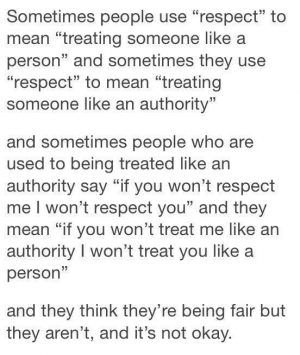 This is the rarest experience today on the planet.

When people relate to you like you are a thing, a role, a doorman, or just a buyer, you feel a slight (or strong) pang of hurt… don’t you? I do. And it is not very likely that I’ll want to do it again.

And no amount of sweetness, servility, nice words wash it away when you finally come around to give them attention.

Actually, being praised for no reason, dishonestly, for effect, is as transparent as glass: you are sucking up to them because you want something. Either a thing, or because you want to be considered better than you are, maybe?

Real respect: seeing the other as a person, is not loud. Not using big words, not gushing, not showy. It is more in the eyes than in the words…

People can feel if you look at them, talk TO them (even over email!) or not.

Of course, for most people this would be the first, on both sides of this great divide.

If your ‘about-me’ score is too high, anything above 30%, you literally cannot see them as people. Most people’s about-me score is higher than 30%… and your people’s too, customers, family, co-workers, lovers. But when you actually see them as a person, something dings in them. Suddenly, for a moment, they feel seen.

Some 15 years ago I participated in a week-long off-site training camp for aspiring trainers. 15 years is a long time, but I still remember as if it were yesterday: the underlying theme of the camp was ‘I see you’.

It is both terrifying and uplifting to feel seen. 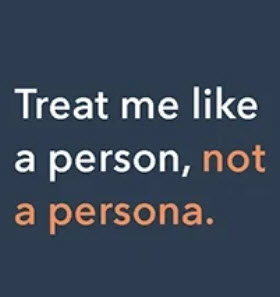 People, you, build a persona, that you feel must be impenetrable, and then you crave being seen, being known, being loved.

One last thing… if you have a really big gap between your two selves, the real self and the self that you show the world, you may want to make everything and everyone wrong… One of the interesting ways you give that to the world is by spewing destructive energy… and lowering everyone and everything in vibration, including your water’s.

Now, pay attention: other people in your environment, in your household do the same. It is unconscious, or semi-conscious.

I have a vengeful personality. I occasionally indulge in vengeful fantasies. I don’t act on them, but I bet I have acted on them unconsciously, muscle test says: yes, I did.

And so did you, or your family. 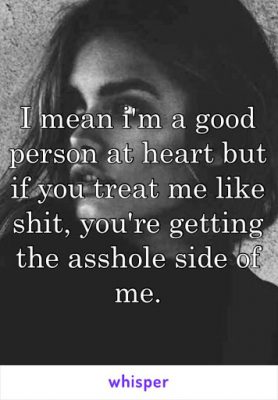 It’s Dark Side leaking out.

Occasionally my students tell me the truth… how offended they were, how angry they were… They haven’t told me that they wished me dead, or other vengeful wishes, but from their results I can glean the truth: they have.

Owning that you wished harm or death on another is incredibly cathartic and freeing.

No one who matters is fooled by your pretenses, including yourself. All you are buying is self-hate. Is it worth it?

How do I handle this issue?

I identify it. I own it. And I talk to myself about it. I ask if it is worth my life to give it to hate and destruction? And I always come away freed up.

Some issues return with some regularity. And every time I handle it. I say: I choose myself, not the hate. I choose to take care of myself, instead of wishing the other harm. Them being harmed does nothing for me… So I just stop wishing them harm, and return to taking care of myself and my business.

It takes as long as it takes. But it’s worth it, because the price you pay, hate, self-hate, lowering your vibration, lowering your results in life isn’t worth it.

Self-knowledge, self-awareness, and being able to hear the underlying, unconscious self-talk are the things that you need with this, for this.

The other day I offended someone on the phone. I tracked his emotions for about an hour thereafter. A few days later I apologized. The dude answered that nothing happened, but he lied. Had he told me he was offended but he forgave me, would have been a healthier behavior… lowering his narcissistic tendencies, and his self-hate.

Self-hate makes you do a lot of things that harm you. Fat people, addicts, lazy people, chatterboxes, all victims of self-hate.

Get out from under it… it is simple, although not easy.

I started to scratch the surface of this issue in the ITCH workshops, but there is more to it: and that the more is in communication. Communication with yourself. And that is the big big missing that I can see.

In the ITCH workshops I taught what are the WORDS and attitudes that say something (respect, love, adoration, etc.) is due to you, how you attempt to extort them from others, how you withhold the exact same thing from others, and how it makes you a puppet on a string, powerless, and miserable.

Temporarily. There is no chance you can get rid of your ITCH, but you can get a good life, maybe even a great life inside the machine created by the ITCH… it is actually a matter of communication… and that is what I’ll teach in the Live webinar workshop.

If you would like to learn to diffuse self-hate, vengefulness, being offended, anger, come and get on a webinar with me. This is your opportunity.

If you haven’t completed the ITCH course, or the Playground, this is your buying link to the ITCH workshop and the live session.

Get your ITCH course
And if you have, and know what is your ITCH, then you can just buy the live session… email me for payment link

This offer is running with a special: get a hefty discount if you buy it before my birthday, September 4 midnight

This is to celebrate with me that against all odds I’ll reach the age of 73. I didn’t think this was going to be possible a year ago…

Use coupon code BIRTHDAY on the checkout page to get the discount.

I’ll schedule the LIVE course on a Saturday afternoon my time (New York) to suit most readers of my articles. Most likely September 26. 4 pm New York is early morning in Australia, 10 pm in Continental Europe, 9 pm in the UK, 1 pm in California and 10 am in Hawaii.

At this point I don’t have any students in the Far East.