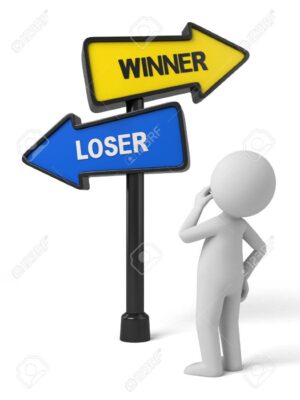 If you observe, every long running TV show went through a sudden change a year or two ago.

The plots got steeper, the camera movements swifter. Why? Because we live in “attention economy”. The rarest resource, the most un-renewable resource is people’s attention.

You need to be sold not to click the channel changer, to stay there sitting and watching. Your attention represents high dollar value for the TV company, for the advertisers, for the actors, etc.

Nothing happens unless somebody sells something…

…goes the saying, and it is true. When somebody sells something, that also means somebody bought that thing.

Winners are in predominantly sales people, because they make things happen. They sell themselves, they sell stuff, they sell ideas.

Everybody loves to buy stuff, but most people don’t want to sell… They feel it is below them. They feel people should just buy their stuff without them having to sell it.

Every person is a combination of winner and loser. it is a percentage measurable issue, just like your vibration. Just like your speed of reading, your math grade, or your health, these are all measurable, and can be expressed in a number between zero and 100… Hundred being all you could be.

Nobody is stupid, nobody is ‘smart’… it is also a percentage issue.

Nobody is a good salesman or a bad salesman… it is all a percentage issue.

If you are 1% better than others, you get most of the glory.

As long as you view the world as a black and white, all or nothing issue, you are on the losers’ side.

It takes work to improve in anything, even just one measly percent.

So most people look at the world as winners and losers, black and white, and use it justify that they do nothing. They use that black and white systemic judgment to get off the hook and stay off the hook. And conveniently be miserable for the rest of their lives, hoping that someone or something will descend on them and rescue them.

Nothing and no one is coming to rescue you.

You need to wrestle your attention back and start improving your results in the areas that are important to you.

Instead of being the one sold by everyone and their brother, you could be the one selling yourself on becoming faster, sharper, bigger, on becoming a winner.

My winner webinar will begin in two hours… you can sign up and get the live webinar, or if you are late, get the replay. Here is the link to sign up: https://www.yourvibration.com/dimewebinar

If you are one of those 50 people that tried to sign up to listen… but the link was wrong… I apologize. It is fixed now.