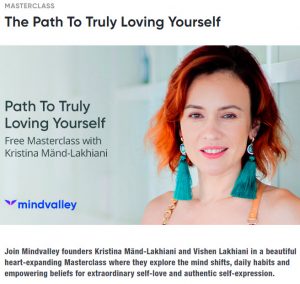 I have been observing that someone from Tallin, Estonia, a former Soviet Union country, has been spending time on my site.

And then in yesterday’s email, Vishen Lakhiani from Mind Valley announced a new masterclass: Unconditional Self-Love.

I don’t know what his wife is going to teach on that masterclass, but I know one thing: it will be, most likely, really beautiful, nice, heartwarming, and utterly ineffective. Why?

Answering that why is what this article is about… what they won’t teach you at Mindvalley.

I remember when I first learned that there is a way to use language where it has power.

Power is the speed at which one moves something from A to B.

Mood, object, crowd, solution… they can and need to be moved… and most people’s experience of life is that they are powerless.

You don’t have power over what someone does, says, or thinks.
The weather
The pandemic
and a whole lot more

But you have power over

what you think
your attitude
what you do
who you associate with
where you live
and very important: what you say and how you say it.

But for your word to have power, you cannot use it if it were cheap.

Yesterday during the Amish Horse Training workshop I noticed that the students who have even just a sense of sacred do a whole lot better in growing themselves, in making something of themselves, so they don’t remain inconsequential, just another fledgling human.

The ones who use their words for babbling don’t. They clean their nails with the sacred sword, stir the soup, and complain that they have no power. They expect it from others, from circumstances, and don’t recognize because they don’t hold the word sacred.

Word, as a tool, has its moves.

The powerless ones talk about, write about, it is all about. Their use of the word famously demonstrates that they don’t consider their words powerful, that they live life as an effect, not as a cause.

It is probably not their fault. You have to see first before you can act.

I first saw that I had power over some aspects of life when I was 38 years old. Before that I lived like a recovering victim, angry, miserable, hoping to escape my shadow, and unaware that I had any power at my disposal.

And at age 38, then and there, I used the power I discovered to make a major move in my life: move to yet another country.

Unfortunately this discovery wasn’t rooted enough, I didn’t quite understand what I had… and it took me many years to climb out of the ditch I fell back into, again and again. Even today, occasionally, once or twice a year, I fall into that same ditch… But now it takes me only noticing it and a short conversation to climb out… not time at all.

Luckily I had a support structure that was continuous: the courses company where I had my first awakening, Landmark Education.

I saw the potential, I saw in my mind’s eye how, like a spaceship, I can lose all the ballast, all the unnecessary weight and ‘common knowledge’ and take my life off and start living like a human being.

And slowly but surely I learned how to use language, how to use speaking to cause things.

I learned to lend my words power. I learned to become powerful because of all I can cause in language.

Word can create… when it is wielded by someone who uses it as a sacred weapon, a sword. 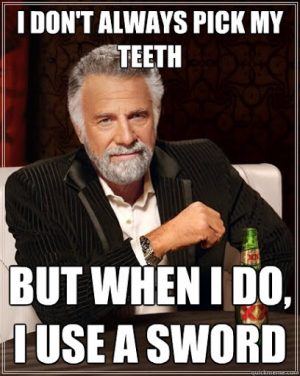 When it is wielded as a broomstick… it has no power.

Even the same exact words that have immense life-altering power when i say, lose their power when someone with no power to their word say it.

My word creates, because i have a sacred relationship with my word. I honor my word as myself.

Obviously what came first is honoring myself.

The famous dictum from the Bible, love your neighbor as yourself, is like a seed that falls onto hard ground: people do not love themselves.

You, who you think you are, and who you really are are not in sync, not in agreement, not at peace. not in love with each other.

Self love that could be extended to your neighbor is almost completely non-existent.

And it is all because how you use your word to babble.

Our outgoing president in the United States is a good example for that… lots of words, not substance, no person, no power. Inflaming, yes, powerful? No.

The last president in this country that I know of was JFK, the famously assassinated Kennedy.

In my work I call the relationship between you and you, integrity.

It is possible to increase your level of integrity, little by little, honoree word by honored word.

Most people who you can observe have only referred power.

Their money, their social or societal standing seems to refer some power to them.

I literally don’t know anyone with real power, although some of my students are moving in that direction.

The path one of my student took is a good tale to tell.

Her first actions were due more to the effect of the energized water than of integrity. She started to become active and walked, exercised, and returned to some of the lost energy due to slothfulness.

Then, after a lifetime of no or minimal connection between her word and her actions, she promised me to make some collages.

I forgot why… but I remember that she promised. And she delivered.

And she continued doing elaborate collages with hundreds of pictures, for months. she started in June, and little by little I can see her becoming powerful, mastering more than any other student I have EVER had.

Why? because without integrity nothing works.

Integrity is what is the main difference between homo sapiens and human being. Integrity and responsibility. Responsibility is the capacity to own what belongs to you. Your word, your actions, your results.

Integrity and Responsibility are like a power team. They become available at 200 vibration, although availability doesn’t mean they are ‘used’…

And most people are.

Because to use both integrity and responsibility, you need courage. You need to be able to say: fear, fear, so what? And move towards what you want to do.

When I observe this student, it is obvious that she is starting to love herself. It is tangible.

I am working on a new course that can take you from no integrity to a level of integrity where your word starts to get power.

Don’t be mistaken. The way to change your life, the way to grow, the way to make your life a life you can love and can live powerfully is through WORD. Your word. If it has power.

This course will be delivered in a different format from all my other courses: as a course.

Thus far all my courses have been workshops. But if I want to help more people to step into their power, to become all they can be, or at least more they are now, I need to create a course that doesn’t need me to be present personally.

The last such course I ever created was an Internet Marketing Course in 2010… And it was an amazingly popular course with hundreds of buyers.

I remember the fortnight where my integrity took a large leap.

I was in a seminar, and we got a homework… and I took on to be a ‘coach’ and call everyone to make sure they don’t forget what they promised.

There were four promises:

Take a cold shower every day was one. I forgot the middle two… and the last promise was to share at least once a day with someone who would appreciate what doing that seminar was doing for you.

And for me… to call every person every day.

In 1988 even local calls cost money, and even inside state calls cost even more money.

I was poor… so it was not reasonable for me to promise to spend my paycheck on calling people who mostly didn’t want to talk to me reminding them of their promise that they weren’t doing.

I did everything I promised… It was a real stretch, but it altered my life. Forever.

Once you taste it you don’t ever want to let it go. Self-Love.

Without that fortnight it could have taken me ten more years… I say.

Anyway, I don’t have anything to sell today, but if you are interested, I have an energy, both in audio format and in remedy format that is a shortcut to that self-love… The Unconditional Love activator.

It was the first activator I ever created.

The format was borrowed from the Theta Healing originator, Vianna Stibal.

In my humble opinion (and according to Source) theta healing doesn’t work… but at that time I used what was available to me, and the Unconditional Love activator works.

The test of any energy remedy is using it on children and on animals.

They don’t respond to placebo… If something works on them, then it works.

Here is the ‘testimonial’ I got about it

Even My Grandson Experienced Transformation, Wow!

Remember, I was the first person to get the Unconditional Love Activator. I didn’t know what I was getting myself into. I just trusted you that you would not give me anything that is not good for me.

It was amazing. I was buzzing, I was bubbling, I was in heaven.

My four and a half year old grandson told me that he was going to stop throwing temper tantrums. I was like “That’s great!” and I was wondering what would happen.

Then every day he came home from kindergarten and told me how many days he had been tantrum-free.

On the 21st day me and his mother took him out to celebrate.

He hasn’t had a tantrum since, and he stopped being obnoxiously loud and demanding as well.

I am sure it was the Unconditional Love activator that got to him through my history level, as you explained.

Thank you so much to you and Source.

Get a taste what it’s like to have self-love