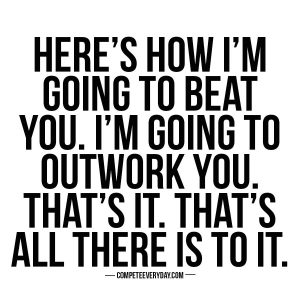 The secret of big success in most any endeavor is to outwork the competition.

But humanity, you, have a problem with that.

Work? Yeah. Character study, life study, I learn from books and movies… so I can work with you better. I love working. 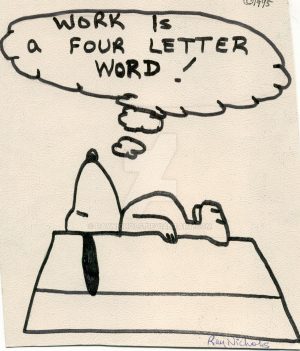 I once had a teacher who considered work a 4-letter word… and you know what? it is. But what he meant by that is that it is a curse word, a dirty word, and that… work isn’t. Yet, the word: work creates an emotion response in many people that is revulsion.

Work is just doing something. What makes it a four letter word is the attitude, not the activity.

One man’s pleasure is another man’s hell… The only difference between the two is the attitude.

One of the most important jobs I have is to teach people to alter their attitude at will.

Interestingly, although the attitude about work seems to be about work, it isn’t. It is about yourself. Your self-image.

People often cover up their misgivings about their abilities deferring responsibility to some other missing. Blame some other lack, so they don’t let you or even themselves know that they have doubts about their own abilities.

When I look at the people who were once regular students and aren’t now, I see this exact thing with each and every one of them.

Were they justified to be afraid? hell yeah. They didn’t have much going for them upstairs. Or better said: not as much as they would have liked you to believe.

I just muscle-tested the few people who used to be regular students. 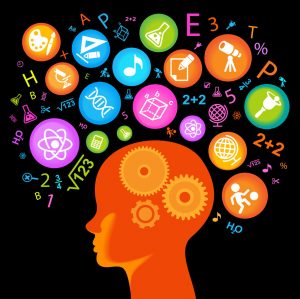 Their intellectual IQ, intellect only 2 is either 100 or 70.

Is 100 on the intellectual scale decent? yes. You can get a master’s degree and don’t break a sweat, unless, of course, you fancy yourself a genius… meaning, your precious ‘I’, meaning your ego is set to protect its mistaken perception based on brilliant moments. Meaning: you don’t do the work…

The issue is that you are not willing to be normal. You want to be special, and you are not.

This can happen on any level of intellect, by the way. If your precious ‘I’ is set too high, and the gap between your precious ‘I’ and reality, what you can do with what you have, is to big, unbridgeable, then you will not want to put out any real effort lest you are found out, and work will be a four letter word.

You’ll want to get it done fast, you work, or spend all your time working thinking about the stuff you could do instead. You live in a dream work… but all you are doing is protecting your precious, unrealistic ‘I’.

Meaning: you never put all your power in all your effort: your work will be, at best, mediocre.

Hiring someone like this is a bad deal… I have found out the hard way. His only contribution to me and my work is that I could see, finally, what I am writing about in this article. I had never put two and two together before.

Is 70 on the intellectual scale decent? no. You probably have had failure experiences, during your school years, so yeah.

This doesn’t mean that 100’s didn’t have failure experiences… some of them did. As someone in their family, or a teacher labeled them as ‘slow’ or ‘stupid’… berating them, losing patience with them, etc.

I was also labeled as stupid, I am dyslexic. 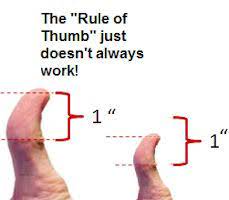 I never considered other people’s rules of thumb relevant to me. So their stupid and my stupid carried different meanings: I was stupid because i saw one thing where there was another. I still do. I see words that aren’t there. I see cards that aren’t there (in Freecell), and it takes two glances to make sure I act on what IS there, not what I first saw.

My biggest mistakes are in judging people… I am low on self-trust… rightfully so: I have made so many misjudgment in my life, I have tons of evidence, that I can’t trust my judgment.

It is very interesting that most of my ‘paycheck’ comes to pay me for my judgment. Talk about illogical…

So how do you alter someone’s attitude, someone’s self image so suddenly they start doing what they need to do to be successful in life?

One of the methods I learned in the Art of Soaring book. It is called ‘renaming’. Ultimately the whole book, even the second book, The Power of Luck, is all about renaming… 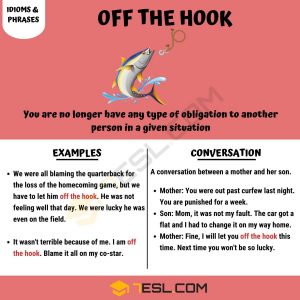 Why? Because who you are inside, deep inside, where no one is looking, is a ‘magician’ who creates the world, unconsciously, to make you right, or to justify something, but ultimately to get you off the hook.

Who you are, deep inside, is the racket…

So when we can use ‘renaming’ to alter the who… then, temporarily, we can override the freaking racket, and you’ll do things, say things, feel things, create things, that inside the racket you couldn’t.

Temporarily, I said, because, as much as I’d like to, the racket cannot be disappeared, or even altered.

I still have the same racket I had when i was completely miserable. The only difference is that I’ve renamed myself so many times, that now it is instinctual requiring only an occasional conscious input from me.

But there is a little (big?) wrinkle in the system. That is what makes the Art of Soaring book only 10% truth value: the renaming only works consistently for people who have had their anchor to doom pulled.

Occasionally it works for everyone.

Obviously, if you are writing a book about a methodology, you’ll bring successful examples, and won’t say a word about the no successes… right?

I now have two handful of clients who have had their anchor to doom pulled.

I will invite them to a live series of ‘Soaring Method’ workshops, where I not only teach, I coach and assist in first learning the art of renaming, and second altering your life as a result.

I’ve done the first a few years ago, but people weren’t consistent in renaming themselves, so now I am creating a continuity program so the results won’t be a flash in the pan.

I only accept people who have had their anchor pulled. Why? Because the rest would dominate the class instead of doing the work.

Does the anchor to doom have any relationship with the unwillingness to work?

Hell yeah… of course. The doom is always the failure and the punishment you expect when making a mistake, when you are found out. It pretends to be something more complicated than that, but bottom line: that is what you expect.

So I was afraid that if I don’t perform I’ll be homeless: thrown out of the nest. So I performed… to my health’s detriment. 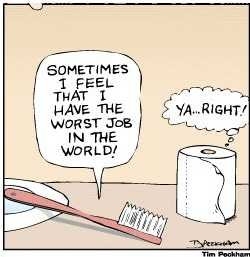 I am one extreme. The other extreme is the person who is afraid to be excluded, beaten to pulp, mocked, whatever if they don’t perform to spec… and they avoid performance.

Is there a third option? If there is, I haven’t encountered it yet.

Renaming is an art… it has to be somewhat whimsical. Straight opposites come from the mind… but don’t do the job. 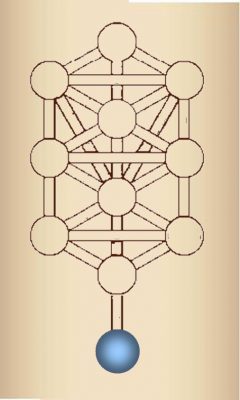 The reason the art is called the art of Soaring is because Soaring refers to ‘coming from the beyond’… not from the meat and potatoes, pedestrian world of ‘Malchut’. Malchut is the Kabbalistic word for the physical reality.

Malchut is dark, dim, and stuck without knowing that it is.

So for renaming you need to be elevating your state to tune into the beyond.

My core group has been practicing that in the ‘Getting Guidance From Your Future Self’ workshop: to be able to contact your future self, you need to go beyond ‘malchut’. There is no future self inside Malchut…. it lives in another dimension.

Some people find it easier than others. The stronger your investment in avoiding: the harder it is for you to connect. But everyone can connect… it’s in your DNA.